Cate West and the Vanishing Eyesight

OK, I admit it, it’s been a long time since I played my DS. I’m not entirely sure why—I just lost the urge to play at some point. It might have happened sometime around the end of my Animal Crossing phase, or perhaps in the middle of my Diner Dash phase. At any rate, I stopped using it, and didn’t pick it up again for about eight months.

It was only recently that I decided to start playing it again. I think it was Professor Layton that finally drew me back. I was thrown back to my Phoenix Wright days, and I suddenly remembered just how much fun DS games could be. After that, I found myself wanting to try more new DS games, to see if I could sustain my newfound enjoyment of my little pink portable console. 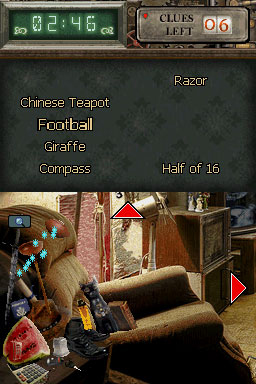 As it happened, the next DS game that came my way was a game I had never heard of called Cate West and the Vanishing Files. I was standing in Target, looking at the back of the box, and I was intrigued. I saw puzzles; I saw adventure; and as I am extremely fond of adventure-puzzles, I thought I would take a chance….

Sadly, the only thing I really got out of Cate West was a stern reminder of why I do not usually buy games/movies unless I have already played and/or seen them. This game is, in a word, horrible. In two words, absolutely horrible. Unfortunately, by the time I figured this out, I was already “involved,” and I had to play the damn thing through to the end. It made for what amounted to a very long, very cranky week.

So what was so terrible about this game? Lots of things, but they really boiled down to five major issues:

1. All the puzzles are hide-and-seek games that have no bearing whatsoever on the plot. I swear to God, every single frickin’ puzzle had me either finding hidden objects, looking for tiny differences between nearly identical photos, or replacing objects that I may or may not have found at the original crime scene.

Now, normally, I don’t mind the occasional “hidden object” game. Hell, Dream Chronicles is full of those types of puzzles, and I didn’t mind them half as much. Why? Well, for one thing, in Dream Chronicles, the hidden objects puzzles are directly related to the plot. You look for a bunch of ladder pieces so you can assemble a ladder. You search for a bunch of toys so you can position them just so and retrieve a hidden message. It might not be the most sophisticated of puzzle gimmicks, but at least it makes sense. Not so in Cate West. You look for a certain number of hidden objects, and once you reach your quota, Cate uses her “super psychic powers” to tell you where to go next. It doesn’t make a damn bit of difference what the objects are, just that you reached the specified number in order to advance to the next puzzle.

2. The plot is REALLY fucking stupid. I imagine most of you figured this out the moment I said “super psychic powers,” but I had to say it anyway. That’s right, our plucky protagonist is a Psychic (with Daddy Issues). 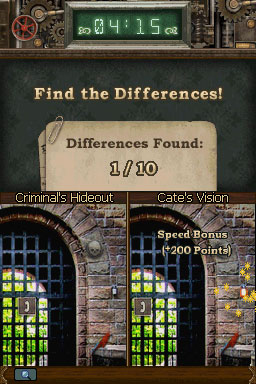 Why is she a Psychic? (Spoiler!) It turns out that she is a direct-line descendent of Kaspar, the third Magi. Yep, the ones who went to see the baby Jesus. Apparently, Kaspar’s descendents have the gift of seeing “truth,” which is why Cate is a Psychic. Oh, oh, and apparently, her powers are “super-secret” and she’s “never revealed them to anyone,” even though she a) has several in-depth conversations about her powers with a complete stranger, b) uses her powers to solve crimes, and c) WROTE A FUCKING BOOK. Not even kidding on that one. Conveniently, the aforementioned complete stranger also turns out to be a direct descendent of one of the Magi (Balthesar, in case you were wondering), which of course makes him a great potential love interest. Oh, and the main antagonist is a direct descendent of Melchior. Just in case you were, you know, wondering.

3. The game is extremely repetitive. Think Assassin’s Creed, but much, much worse. In that game, at least you have three scenarios that you basically have to play three times apiece. In this game, there is one scenario, and you have to play it fourteen times. The objects, names, and images change, but nothing else does.

4. Ow, ow, ow. Remember the part where I was complaining about the hidden object puzzles? I neglected to mention the fact that, in addition to being stupid, these puzzles are tiny. Seriously, do you have any idea how hard it is to find 50 quarter-inch hidden objects on an itty bitty, 2- by 3-inch screen? I mean, my God, it’s a wonder I’m not blind! If it weren’t for the “hint” feature, I probably would have thrown my DS against a wall (repeatedly) by Stage 3.

5. “Random Tap” Penalties? WTF? OK, I know I’m getting into minor quibbles now, but I hated this particular game feature. As mentioned above, trying to find tiny hidden objects sucks. Any rational person, after about a minute of looking, would just start tapping randomly, trying to find objects by chance rather than skill. However, in their infinite wisdom, the game designers decided to include “random tap” penalties in the game. Basically, if you tap on the screen more than 3-4 times without finding anything, they subtract 30 seconds from your allotted puzzle-solving time. Who does that?

It is not worth it. Gamer Girlfriend has spoken.

The original JSR will soon be re-released. But what about the sequel? Oh, I guess it happened.