Last month in “The Gates of Life,” Captain Render, Rivers Fusion, Barbarian-Mage Enrique, and Jonathan the Minotaur had just set sail from Helpless Gnomes’ Island in search of more life for Render to snuff out. There was a stowaway on their ship—they very same wrench-toting gadget-monger gnome they’d met previously on the island under unpleasant circumstances.

The gnome, Clyde, held a grudge against our heroes due to the above-mentioned circumstances, so he put his skills to use and blew a large hole in our heroes’ ship. Our heroes dove overboard, defeated a nearby gang ofhostile singing seabears, and swam back to Helpless Gnomes’ Island to figure out what to do next. Clyde arrived shortly thereafter, and our heroes quickly deduced that he was the one who blew up their ship.

Render: You like to build things, don’t you, gnome?
Render: You’re going to build me a ship.
Render: One that’s much bigger and much cooler than the one you destroyed.
Render: Depending on how good a job you do, I’ll decide whether to kill you or not.
Clyde:  Ye know I’m more inta buildin’ gadgets an’ such, an’ notsumuch tha’ boats…

Render: So, get to it.
Clyde: Huh?
Render: Make me another damn boat!
Clyde: OK, OK, fine! Jus’ gimme an hour.
Render: You have twenty minutes.

Many hours later, the group gave up on seeing a finished boat any time soon, and Jonathan the Minotaur took it upon himself to set up camp and start a fire.

Rivers: We should roast marshmallows!
Jonathan: We don’t have any marshmallows.
Rivers: Way to kill the dream, cow head.
Jonathan: …
Rivers: What?! Got no comeback, huh?
Enrique: That was him not dignifying that with a response.
Rivers: Oh…ouch. 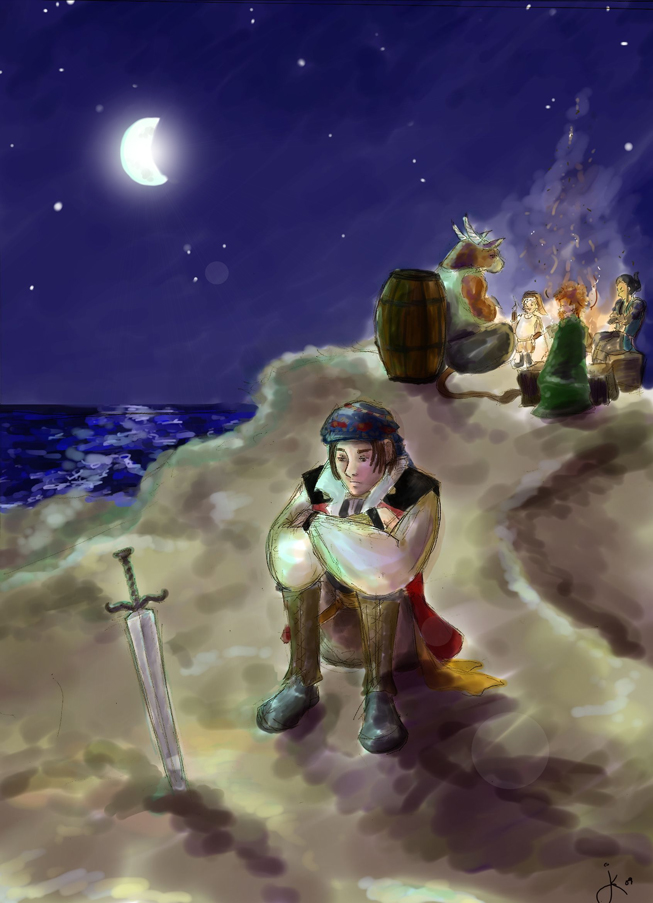 Meanwhile, Render sat alone on the beach, wondering about whether his newfound quest for blood was really giving his life the meaning he was searching for. After quite a while of sitting alone, Clyde wandered over to him and sat down.

Render: I’m not sure this newfound quest for blood is really giving my life the meaning I’m searching for. Granted, I haven’t really killed anything yet, but all this hunting is not doing a thing for me. Maybe I just have to keep at it until I finally take a life or two; then I’ll know for sure.
Clyde: An’ they call me crazy.
Render: What?! Hey, why the hell aren’t you building my ship?! Get back to work!
Clyde: Fine, fine.

Render continued to contemplate his situation throughout the night, and eventually managed to fall into a restless sleep.

Clyde: Wake up!
Render: Ngh… This had better be important, I just fell asleep!
Clyde: Da ship is done!

Clyde woke up everyone in the camp, and groggy and blurry eyed the group stumbled over to the edge of a nearby cliff overlooking the shoreline. The murmurs and grumbles stopped immediately when the ship finally came into view.

The ship certainly had ship-like features, but it had a few less-than-expected features.

Render: Those look a lot like wings on the side.
Rivers: And a giant balloon on top!
Clyde: Ain’ she da best?!
Enrique: So…we’re flying now?
Clyde: Yep! You ‘av me word, she flies like a bird!
Render: That’s not that comforting, oddly, but I must say I’m really curious about this.
Rivers: Let’s go, now!
Render: Fine by me! Where to?

And so ends this month’s edition of “The Gates of Life.” Where are our heroes off to next? What will they do when they get there? Is Render having second thoughts about his bloodlust? Your votes will decide, so vote wisely. 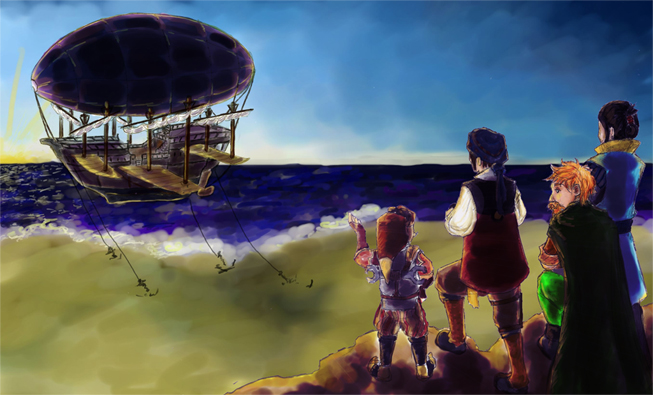 Render: I’ve been thinking. I’m never going to find my life’s true calling while I still have ghosts of my past holding me back. Jonathan, set a course for my homeland, Trelenodora. I have some unfinished business to take care of.
Jonathan: What makes you think I know how to work this ship?
Render: Right. Clyde, same order!
Clyde: Yessir, Cap’n!

Pretty Fly for a Short Guy

Render: You know what, Clyde, this is a pretty amazing ship. I may have had you pegged all wr–oh my God, flying seabears!
Flying Seabear Army: Reveeeenge!!

Rivers: You guys, I have a brilliant idea.
Render: I’m going to regret this, but what is your idea?
Rivers: OK, I’ve been wanting to do this for years.
Enrique: Sleep with a woman?
Clyde, Jonathan, andRender: Burn!
Rivers: No, dammit! I don’t want to sleep with a woman!
Enrique: I knew it.
Rivers: What…? No! That’s not what I meant! Argh!! We’re going to the infamous Sky Bazaar to see Shattered Heart’s Tears live!!! Yes!!!
Render: I knew I would regret this. The Sky Bazaar sounds intriguing, though, so let’s just go.

This poll ends on June 7th.