The One Game I Will Never Play (And Not for the Reason You Think!)

OK, so for anyone who knows me, it’s probably pretty apparent that the title of this article is something of a misnomer. The truth is, there are many games that I will never play, including first-person shooters, survival horror games, and anything that involves lots of timed minigames (I really hate that obnoxious little counter, always ticking down, mocking me as I try to perform its twisted little tasks). But this article is not about them. Nor, it should be mentioned, is it about games that I was willing to try once, but refuse to ever play again on account of them being pieces of complete crap whose developers will suffer the eternal torments of my wrath should I ever get my hands on them.

I refer, of course, to The Sims.

At this point, you might be wondering, “Oh, wait, didn’t she mean to say The Sims 3? I mean, it just came out like two weeks ago, so she would have had just enough time to buy/rent/borrow it, play it, and decide she didn’t like it before writing yet another half-assed article that she turned in less than 15 minutes before it was due.”

While I will admit that the bit about turning in my articles right before the deadline is somewhat true (just ask Paul, GameCola’s Editor-in-Chief), the fact is, I have not actually played The Sims 3. Hell, I didn’t even play The Sims 2. No, I am talking about the original Sims, which I played many years before I met Mike, or even fully understood what a “gamer” was. Of course, I didn’t exactly mean to pick up the game at the time; it just came free with the purchase of my first personal computer. Looking back on it, I think I should have recognized that “free gift” as the first sign that the game was evil. 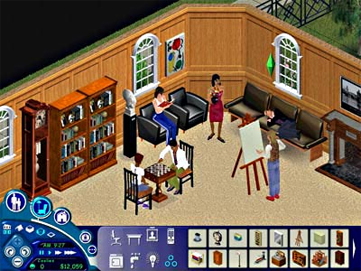 At first, playing the game was simply novel and fun. I hadn’t had many computer games up to that point, as my parents weren’t overly keen on buying them, so it felt like a brand new toy had just fallen into my lap. (Literally speaking, that’s exactly what happened). The whole family gathered around the monitor together, creating avatars for ourselves, moving into our first little house, exploring the new world, seducing the neighbors…

OK, so that last one was actually just me, and not when I was playing the game with my family. You see, I hadn’t had The Sims for very long before I realized the extent to which I could control the lives of those little people on the screen. I could make them go to work. I could make them cook dinner. I could make them use the bathroom. I could even make them have sex. (Well, not really, but I could make them grope each other’s asses while they made out passionately to Rachmaninoff.) Plus, it didn’t seem to matter to the Sims themselves whether the person they were kissing was male or female. If they liked the other Sim enough, regardless of gender, they were pretty willing to get down. It was all very hot.

However, in the end, it wasn’t the sex that really made The Sims so mesmerizing to me. It was thepower. Influencing lives, manipulating behavior, indulging random whims, and all with no regard for the mental or physical wellbeing of the “people” whom I was controlling. There was no need for guilt or conscience. The AI’s weren’t “human,” after all, so it gave me a free pass to switch off all of my better instincts and lose myself in the rush of total control. And it was exhilarating.

It didn’t last, though. What began as a tiny, niggling worry at the back of my mind eventually morphed into a full-blown concern that I was slowly turning into something that I did not like. Once the initial excitement wore off, I started to feel unsettled, and more than a little dirty. I also began to notice the impact that the game was having on my life. The more I played, the more I found myself losing track of time, putting off homework, racing back from dinner just so I could resume my little power trip…it was too much, and I decided it had to stop.

So I did stop. Cold turkey. It has now been more than five years since I last picked up the game, and to this day, I have no regrets. All that remains is a slightly bad taste in my mouth whenever I think about playing it. Still, I am not entirely sorry that I went through the experience. If nothing else, it was a timely reminder of why I have to be so careful about which videogames I choose to play, and how I let them influence me.

Now, I am not one of those anti-videogame nuts who blames gamers for everything that is wrong with society. I do not see the world in such black-and-white terms, and I have known far too many gamers who were thoroughly decent, upstanding human beings to malign them. And to be fair, gaming is not all bad. Some, like my boyfriend, would even be quick to point out that gaming can sometimes influence people’s behavior for the better. Yes, some games can be violent and frightening, but there are also many games that teach players the value of such positive ideals as honor, friendship, loyalty, and yes, even compassion.

Still, even knowing this, I cannot in good conscience deny that the dissociation from reality that comes with gaming does warrant some caution. Whether you’re shooting faceless Germans in the head or telling your Sim that she should flirt with the next-door neighbor, it’s often very easy to get caught up in playing God, and to forget why empathy for others is so important. I guess the wise gamer knows how to turn that impulse off once he sets the controller down; but as for me, I am not so wise. I don’t know how to be two people at once, or to toggle back and forth between my better and worse impulses. In the end, all I know how to do is set down the controller, turn off the game, and make the conscious decision never to turn it on again. Hopefully, that’s enough.