Last month in “The Gates of Life,” our heroes—Captain Render, Rivers Fusion, Barbarian-Mage Enrique, and Jonathan the Minotaur—were stranded on Helpless Gnomes’ Island after the destruction of their boat at the hands of Clyde, the wrench-toting gadget-monger gnome. Unfortunately for Clyde, he was stranded there with them. Fortunately for Clyde, Render agreed to not kill him on the spot if Clyde would build him a new boat, one that was much bigger and much cooler than the one that was destroyed.

Render spent much of the night fretting about his life’s goal, and wondering about whether his quest to kill as many people as possible was giving his life the meaning he was searching for. By the following morning, Clyde had finished construction on a brand-new airship for our heroes. This was a delightful surprise. Render continued to not kill Clyde, instead recruiting him for the heroes’ next big adventure. After all, Clyde was the only one who actually knew how the airship worked.

And that’s where you, the readers, came in—your votes determined our heroes’ next step. What would our heroes’ next big adventure actually be? Would they ever make it off this island? And what of Render’s doubt about his life’s quest? Would his inner urges ever be satisfied? Read on to see the impact your choice had on the lives of our heroes…

Render: I’ve been thinking. I’m never going to find my life’s true calling while I still have ghosts of my past holding me back. Jonathan, set a course for my homeland, Trelenodora. I have some unfinished business to take care of.
Jonathan: What makes you think I know how to work this ship?
Render: Right. Clyde, same order!
Clyde: Yessir, Cap’n!

Rivers: Hang on. I thought you’d already decided what your life’s true calling is: You want to be a murderer. Isn’t that what you’ve been trying to do for forever now?
Enrique: Yeah…isn’t that why we went to friggin’ gnome island?
Render: Well, that’s true.
Render: Well, is it? Is it what I want to do, or is it… Ugh.
Render: Come on. Let’s just get going.

And so, our heroes—Captain Thomas “7-Eye” Render VI of Trelenodora, Rivers Fusion, Barbarian-Mage Enrique, Jonathan the Minotaur, and Clyde the gadget-monger gnome—boarded their brand-new airship and set sail. Er, flew. They set flew.They started flying. Render had to let Clyde give the orders this time, since Clyde was the only one who knew how to run the airship, having built it himself. Render studied Clyde closely to ensure that he would never have to do this again. Despite this inconvenience, Render found that he rather enjoyed the sensation of flying, and his spirits lifted for a few moments. 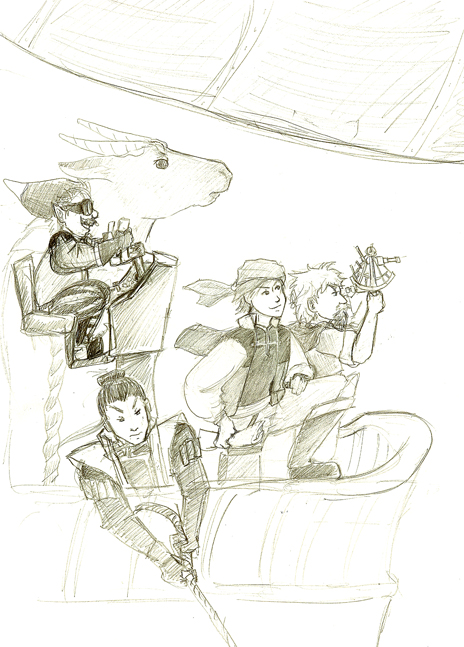 This kind-of contentment did not last long, however. After the ship was on course for Trelenodora and everything that needed tending to was tended to, Render descended to his generously-sized cabin, which he was pleased to discover came equipped with a bar. He sat down to have a drink, but, as our heroes hadn’t yet had a chance to stock up on liquor, he was out of luck. This did not improve his mood.

He was joined shortly by Rivers.

Rivers: So uh, Render… Why are we visiting Trelenodora, again?
Render: I already told you.

Render was slumped over the bar with his head in his arms, so this came out as “Aymalredytolmfphu.”

Render: I have unfinished business there.

Rivers: Yeah, but what is this business?

Render picked up his head and looked resolutely at Rivers.

Render: You really don’t want to know.
Rivers: It can’t be worse than going to a place called Helpless Gnomes’ Island specifically to kill all the helpless gnomes.
Render: Sure it can. Those were gnomes.
Rivers: Yeah. And now they’re trees.
Render: Whose fault is that?
Rivers: Well…
Render: And, actually, now they’re dead. Remember? Clyde’s explosion killed them all.
Render: And I didn’t! Don’t you see?
Rivers: Yes.
Rivers: No, wait. I mean “no.” What?

Render slammed the bar for emphasis. This startled Rivers.

Render: This thought—that maybe I should try being a murderer—just popped into my head.
Render: And now it’s like some outside force is pressuring me to fulfill that thought.
Rivers: Because you’re a psychopath.
Render: Maybe. Point is, I don’t really want to kill, but I need to kill.
Rivers: Oh, really? You seemed pretty excited about murdering those gnomes.
Render: Those were gnomes, Rivers! How many times do we have to go over this?!
Render: And I didn’t even get to kill them!
Rivers: Poor Render.
Render: Point is, now we have to find someone else for me to kill.
Rivers: So that’s why we’re going to your homeland?
Render: Exactly!
Rivers: Why?
Render: Because there’s someone there who deserves to die.

Rivers: And you think that, if you kill this person, your bloodlust will go away, and you can pick a new life’s goal that suits you better?
Render: YES!
Rivers: Uh-huh…
Rivers: Who is this awful person, then?
Render: Well–
Clyde: LAND HOOOOOOOOOOOOOOOOOOOOOOOOOOO!!

Clyde’s voice could be heard all throughout the ship. He was but a tiny gnome, with a tiny voice, but it carried through the ship via the amplifying device he’d built during this brief voyage. In fact, his voice was now obnoxiously loud. Render hurried back to the ship’s deck, Rivers close behind.

The crew looked out, and sure enough, they could just make out Trelenodora in the distance.

Render: Wow, that was fast.
Clyde: Told ye it’s a nice boat!
Jonathan: Forgive me, Captain, but have you yet explained what we are doing here?
Render: Only my second-in-command knows, and I think we’re going to keep it that way.
Enrique: Wow, you trust Rivers more than us? Ouch.
Render: Jeez, yeah, that does sound bad, doesn’t it? OK, fair enough.

Render: Listen up, everyone.
Render: We’ve come here because I want to kill someone here.
Jonathan: Ahh, yes. Of course.
Render: A very bad someone who definitely deserves to die.
Enrique: Woooo!!
Render: After we find this person, and I kill this person, then, hopefully, we can move on to a new mission. Maybe we can find some work in Trelenodora, in fact.
Jonathan: Forgive me, Captain, but why can we not just move on to this next mission, instead of murdering this person?
Render: Because an unknown outside entity is telling me that I need to kill someone, or possibly multiple someones, before I can do anything else.
Rivers: Totally should’ve kept that one between us, Cap’n.
Enrique: Woooo!! Let’s get going!!

The airship reached Trelenodora, and our heroes began searching for a place to land. The first two ports they passed were already completely packed with boats, airships, and starships alike. Render, with minimal help from Clyde, maneuvered the ship into docking position at the third port they came across, taking the last remaining spot. Renders’ homeland was hoppin’, as per the norm. Render reluctantly paid a small fee to the port’s operator, and then our heroes climbed down to the busy streets of Trelenodora. 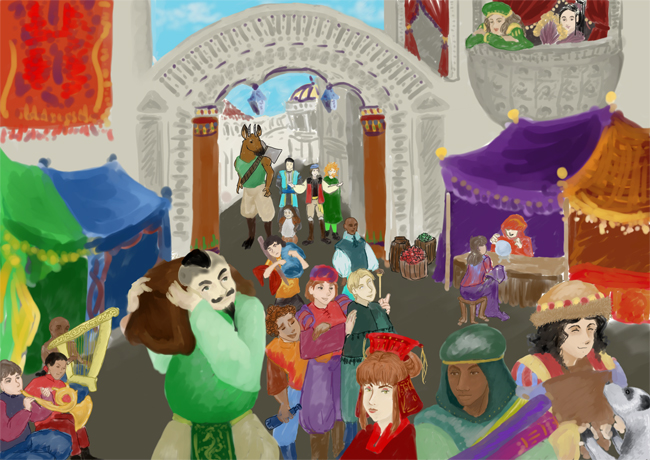 Rivers: Ooh! Ohh! Oh my god YES! Things to purchase! Things! To purchase! Give me some cash, Render—I need a Trelenodora t-shirt.
Render: Can’t. We don’t have much money left.
Jonathan: We don’t?
Render: When’s the last time we did any actual work, Jonathan?
Jonathan: Hmm…
Render: Or came across any bountiful treasure?
Jonathan: I see.
Rivers: I NEED A T-SHIRT, RENDER!
Render: Maybe after I take out our target, Rivers.
Rivers: BAH!!
Jonathan: Speaking of which–
Enrique: Who are you gonna kill?!
Rivers: Yeah, who? I feel like this is something we should know…
Render: Well…

And so ends this month’s edition of “The Gates of Life.” In this quest to placate his inner urges, who will Render’s target be? Your votes will decide, so vote wisely.

Enrique: Who are you gonna kill?!
Render: Branford. He was a schoolmate of mine. We didn’t get along well.
Jonathan: I am not sure you should kill people just because they teased you in elementary school…
Render: He’s now the evil Emperor of Trelenodora.
Rivers: Aha!

Enrique: Who are you gonna kill?!
Render: Captain Rothbury. The pirate captain who taught me everything I know. My mentor, I guess you could say.
Rivers: Oh?
Render: Yes. I left his tutelage under…less-than-ideal circumstances. How do you think I earned the nickname “7-Eye,” anyway?

Enrique: Who are you gonna kill?!
Render: Mr. Elvis. He breeds ferret kits in a mill in Trelenodora. If his ferrets haven’t sold before they reach a certain age, he slaughters them. And he enjoys it.
Rivers: *gasp*! That’s terrible!
Jonathan: Why do you give him the title of “Mr.”, Captain Render, if he is such a monster?
Render: Because that’s what I always called him when I worked for him.

Enrique: Who are you gonna kill?!
Render: …my father. Thomas Render V.
Everyone: ?!?!

This poll ends on July 7.