(Editor’s note: This article was originally published in the July 2009 issue of GameCola, back when GameCola was published in a monthly online magazine format.)

Welcome to “The Ten Reasons,” where I discuss ten reasons why I like or dislike a game. This month, I’m talking about Final Fantasy VI Advance, Part One. I say “Part One” because I’ve done a video walkthrough for this game, and the game is about a zillion hours long, so I have to divide it upsomehow.  Part One was over five hours long, so that’s more than enough gameplay to get a column out of.

Longtime GameCola fans will remember that I gave Final Fantasy VI a bad review. And this article will have more of the same—there are eight reasons for why I don’t like Part One of this game. Consider yourself warned.

In an effort to be fair, however, I will let all the Final Fantasy Fans take out their anger on me, starting…now. Come on, everyone, hit me with your best blitz techniques.

1. My Ending to the Game

My favorite part of the game so far? The part where I stopped playing.

Uh oh, I can hear the Final Fantasy Fans booing already! Let me clarify: I liked making up a fake ending to the game. It was loads of fun to predict what happens to all the characters. And I also got to sing. Thumbs up all around. 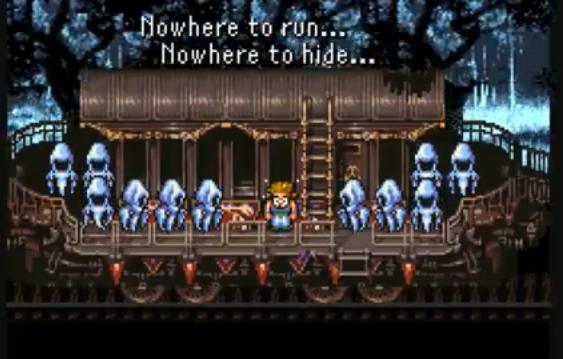 There’s a long interlude in this game where our heroes climb aboard the Phantom Train. This is probably the best section of the game so far—instead of being forced to wander around randomly, you’re forced to go left to the train’s engine, so you actually know where you’re supposed to go. Also, the fights in this area are (mostly) OPTIONAL—if you don’t want to fight Identical Battle #433, you can simply not talk to the ghosts and avoid it. Optional battles are something Final Fantasy games need, yes?

So, basically, I like the segment that deviates the most from the standard Final Fantasy Formula. The somewhat-better gameplay and the cool train atmosphere combine to make this one of the better sequences of the game. Even though the mythology here is ridiculously shoddy.1

I especially like how, in the picture above, the ghosts make reference to the Animorphs TV show. Sing along with them! Nowhere to run! Nowhere to hide! No one to help you be your guide! It’s only u-u-u-ussssss! 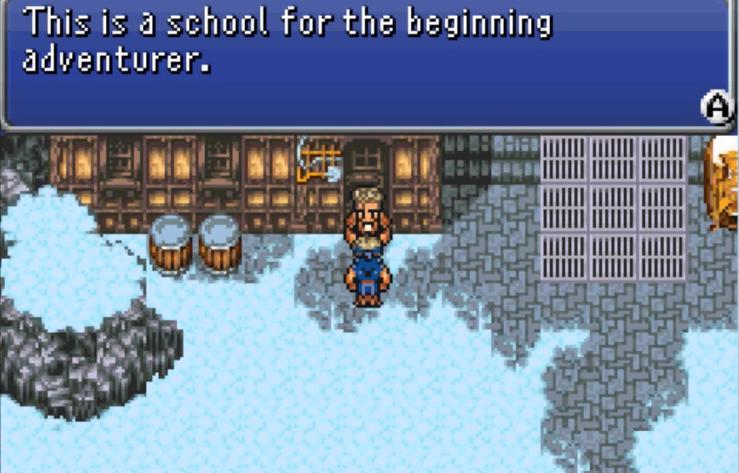 The fighting system in this game sucks. You have to wait ten seconds in between every single attack, for every single battle. And, of course, there’s no tutorial at all, which is the game’s way of saying, “If you don’t know what Runic does, too bad. I won’t tell you.”

Now, I know some people really hate tutorial characters like Navi in Legend of Zelda: Ocarina of Time. But if I’m given the option of having a character explain the gameplay mechanics, or being forced to blunder through the game with no tutorial at all, I’m going to take the tutorial character. I don’t care if the character will annoy me when I replay the game; I can live with that. I’d prefer it if you had the option to turn tutorials on/off like in the Fire Emblem games, but still, I’d pick mandatory tutorial over no tutorial at all any day.

Well, this game has no real tutorial, except for a not-very-helpful training hall that shows up an hour into the game. That’s right—the game forces you to fight enemies for an hour, then it teaches you how to fight. That is a prime example of really bad and really stupid tutorial timing.

And then there’s the fact that the tutorial school doesn’t really teach you how to fight all that well. A few hours later, I was still discovering things I didn’t know about, such as Row or Runic, whatever those are. So not only does the tutorial appear way too late, but it also doesn’t teach you very well. Just peachy. 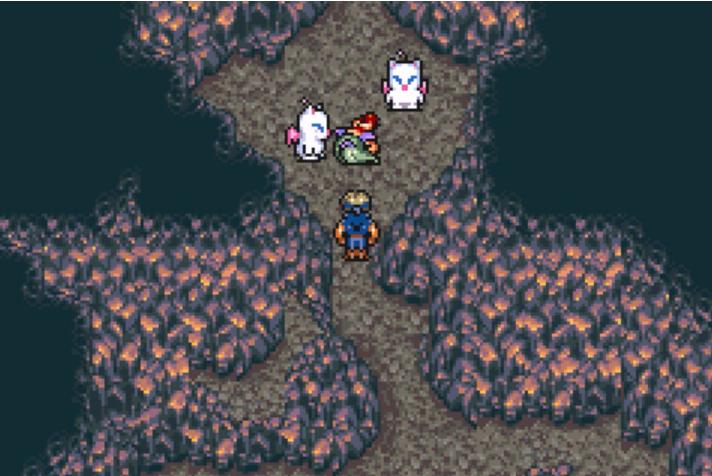 Out of nowhere, Hello Kitty shows up to help you fight guards and a bad control system. It’s the weirdest cameo ever.

And boy, does the control system suck at this point in the game. You’re supposed to be controlling three parties at once, but it turns out that you can only move one party at once. Plus, it takes 1-2 seconds to switch between the three parties, 1-2 seconds in which all the enemies keep moving while your characters stand still, thus making it impossible for you to strategize. You’d like to make a killer strategy like “I’ll send Party A here, and Party B here, thus opening up room for Party C to sneak in on the left and attack the boss,” but such strategies won’t work because the enemies keep attacking you when you try to switch parties, due to the long delay in switching amongst parties.

So all in all, it’s a really ineffective control scheme here. The idea is that you’re supposed to be able to avoid the enemies and get to the boss at the bottom of the screen, but the control scheme is just so bad that you’re practically forced to fight all the enemies before you can reach the boss, thus changing what should be a simple “avoid the enemies” challenge to a half-hour “fight a dozen and a half battles in a row without dying” challenge.

And, of course, the game doesn’t let you buy items or level up before this challenge, so if you’re underleveled, you’re basically screwed, because this game won’t let you avoid the enemies like it’s supposed to. 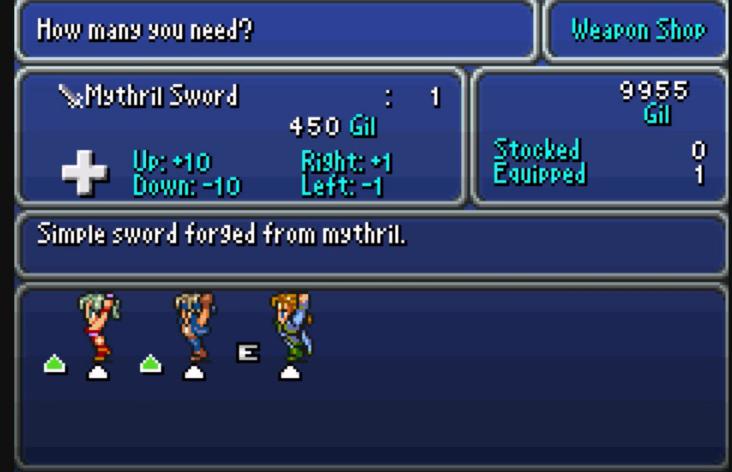 The shopping scheme in this game is not very good. As you can see, it tells you whether or not an item increases your character’s attack level, but it doesn’t tell you how much the attack level is increased. So if there are five items in a shop that increase your attack level, you pretty much have to pick at random and hope you found the one that increases your attack level the most. Granted, it’s probably a fair bet that the most expensive item increases your attack level the most, but since when has Final Fantasy been known as the epitome of fairness? I still remember the first game, where you were forced to spend all your money on equipment, only to find out later that your characters couldn’t equip anything because you bought katanas and, whoops, only thieves can equip katanas.

Now, the game tries to remedy the “how do you know how much attack power an item has without buying it?” problem by giving you an in-depth item information screen whenever you select an item, but it doesn’t work. I mean, look at the in-depth item information screen. Up, +10? Down -10? What kind of statistics are those? How do they help you determine what item to purchase? I have absolutely no idea how it works. 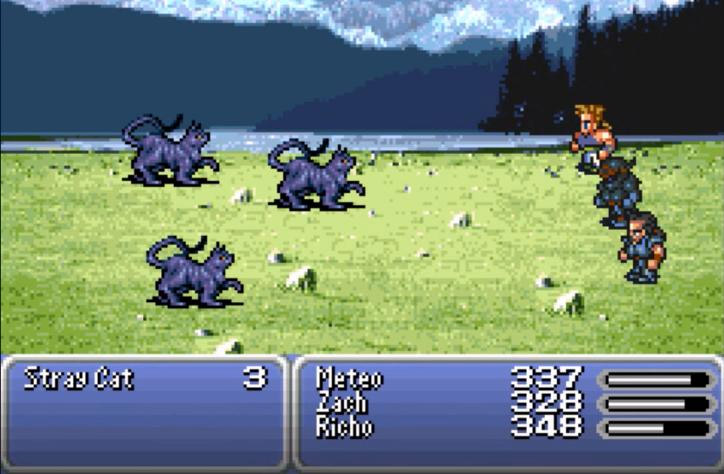 The Final Fantasy series is known for having great, creative enemies, and this game is no exception.

I’m lying, of course. The series is known for having five or six enemies, then just palette-swapping them and hoping everyone is tricked into thinking they’re totally new enemies, just like every other RPG. Although, I’ve noticed that, sometimes in this game, they don’t even bother with the palette swap; they just give the enemy a new name (as in the Wererat becoming a Wild Rat), which is really lazy.

Now, normally I’m pretty mellow about the enemies you have to fight in an RPG, but fighting bunnies and kitties is where I draw the line. Getting pwned by bunny rabbits is something no gamer should be forced to endure. 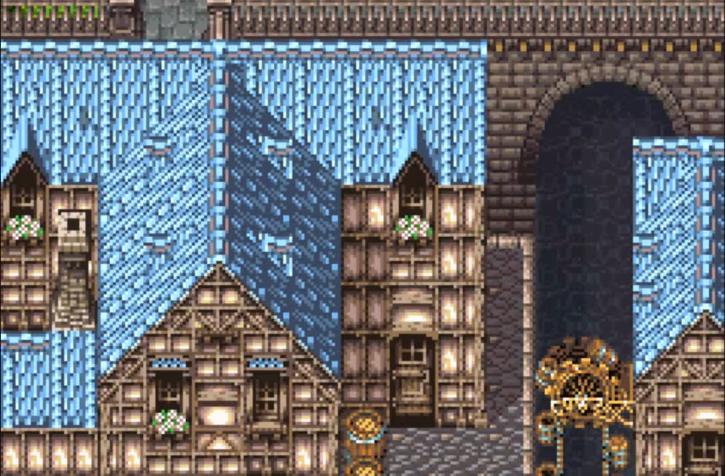 There’s a section where you play as Ridges the thief. Or Locke, as the game wants you to call him, but let’s face it—our thief buddy does not support the tabula rasa philosophy.

In this section, you have to find about five or so hidden walkways where you can’t see where your character is. Look at the picture—it contains two hidden walkways and my character. Can you see them? No, because they’re all hidden.

This is a ridiculously hard challenge. It’s not fun having to walk everywhere, trying to find the hidden place where you’re supposed to go. It’d be annoying if you only had to do it once, but doing it five times in a row is really pushing it. Thank goodness for the Internet, or I’d probably still be stuck at that part of the game. 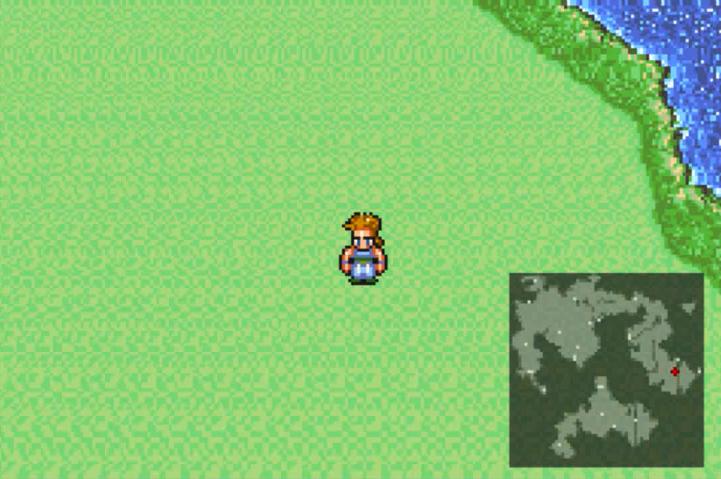 Speaking of hidden places, at one point in the game, our heroes journey to find Crescent Moon Island Mountain Whatever The Official Name Is. This should be an easy journey, right? After all, there’s a map that points out all the locations in the game.

Well, it turns out that Crescent Mountain is NOT ON THE MAP.

Grrr!!! What’s the point of even having a map if it doesn’t tell you where to go? Final Fantasy VI, you pretend that you’ll cut down on random wandering around by giving the players a map, but it ends up being a BIG FAT LIE.

Ugh, now I need to mellow out with some music that mentions crescent moons but is less depressing than the Final Fantasy VI version.

Darn, and I was only one month away from re-papering my wall… 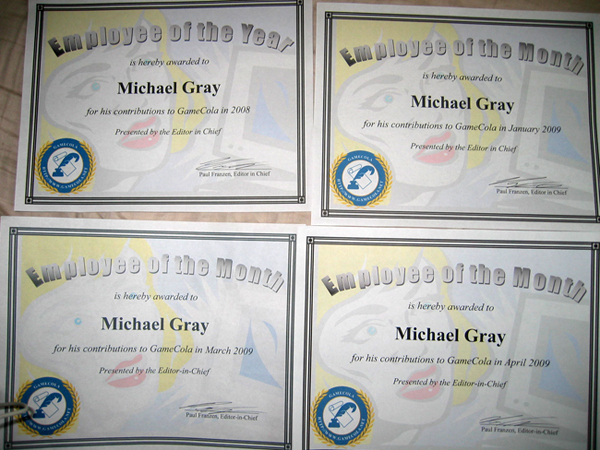 There are a few cutscenes in this game starring Meteo/Sabin. They all star him in “hilarious” situations, such as jumping off a cliff, jumping off a cliff again, and getting mad at Alex/Gau. Even someone like me, who was playing the game for the first time, could see them coming from a mile away.

You know what? Maybe the Mid-Boss is right. Maybe there is no such thing as videogame humour.

Well, that’s it from me for Final Fantasy VI Advance. For now, anyway. See you on the new GameCola, everyone!

1. I don’t understand the mythological scheme this game is following. It tries to be Greek by mentioning Pandora’s Box, the River Lethe, and the ferry to the underworld…but it confuses them all and mixes them up. Odd.

According to message board users, Nintendo is dead due to lack of shooty kill games.