I’m sure most of you out there are familiar with, or have at least heard of, Lewis Black. For those of you who aren’t he’s a very talented comedian known for his angry and insightful rants, sort of like what I try to do here except, you know, funny. Well, he has a particular one about candy corn that I find applies to many of the games I play. To paraphrase, Mr. Black despises candy corn because, despite the fact that the name implies tastiness, candy corn is a vile tasting confection foisted upon the world  every Halloween. Due to the fact that it is only present once a year, people forget that candy corn tastes like tainted earwax and, upon seeing it displayed, will start eating, only to be reminded once again that candy corn is a hideous affront to all that is sugary and good. This annual cycle continues indefinitely, as we are all far too forgetful and trusting when it comes to things labeled “candy.” 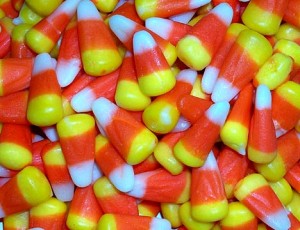 Well, the same thing happens with me and certain games where I will: (1) start playing, (2) get bored/frustrated, (3) turn the game off, swearing to never touch it again. A few hours later, however, I seem to have forgotten all about the bad parts and I turn the game on again, only to be quickly reminded why I turned it off in the first place. This cycle repeats until I either beat the game, force myself to get rid of it, or have Vangie take it away from me.

The most recent example of this is Tales of the Abyss, for the PS2. I had enjoyed Tales of Symphonia on the GameCube, so I thought I would try this out. YE GODS is this game annoying. The characters are a bunch of completely unrelatable and infuriatingly annoying aristocrats with voices that left me doing all I could to cover my ears and skip any movie scenes. Magic and religion in the game are based on sound, called “Fonistry” or “Fonics,” and nearly every other word that comes out of the characters’ mouths is “fon-this” or “fon-that.” Seriously, just watch an episode of The Smurfs and replace the word “smurf” with “fon” and you’d be pretty close to what’s going on here. Lastly, the most egregious sin this game commits is having a railroad plot that will shuffle you along the game’s plot points regardless of whether you’re ready. And if you try to go back and get some stuff done, too bad! Odds are the quest could only be done at the specific time, and now you’re screwed.

Despite the psychological wounds inflicted by these design flaws, I would end up playing it a few times a day, each time forgetting that Tales of the Abyss was about as enjoyable as having teeth pulled. I’m not sure exactly how I forget that between each play session, but somehow every few hours I would gleefully turn on the game, expecting nothing but good times and fun. Just like candy corn, though, the only thing that awaited me was frustration and disappointment.