Note: This post is going to sound like Nintendo is paying me to promote this item. This is not actually the case. For one, Nintendo refuses to e-mail me back when I ask them for free stuff, and, for two, I am seriously just this excited about a stupid calendar. ( Some people love knitting; others love playing golf; I love having a precise schedule of exactly everything I’m going to do every day for the rest of my life.) 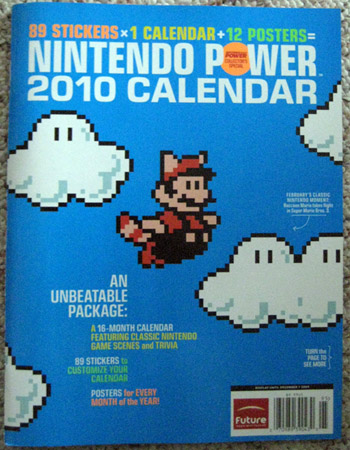 Technically, this publication by Nintendo Power is not called the “2010 Fanservice Calendar,” but it totally should be—every month gives you a new big-huge screenshot of a Nintendo game. And they aren’t just from newer games, either; February, for example, belongs to Super Mario Bros. 3, and July belongs to—holy crap, seriously?—the original Pilotwings. More recent games include the new Punch-Out!! game, and Super Mario Galaxy. Surprisingly, New Super Mario Bros is nowhere to be seen. (I say “surprisingly” because there’s a new New Super Mario Bros. game coming out soon, and because Nintendo has become scarily obsessed with that game’s visual style, using it in virtually all of its Mario-themed merchandise.)

Each month, the calendar also has marked off landmark dates in Nintendo history, such as February 10th, which was the day Mario Kart 64 was released in 1997. On the right side of every page, it also gives you Nintendo “trivia,” like “the Eggplant Wizard turns you into eggplants,” and “the Gannon fight in Wind Waker is so totally the best Gannon fight ever.” 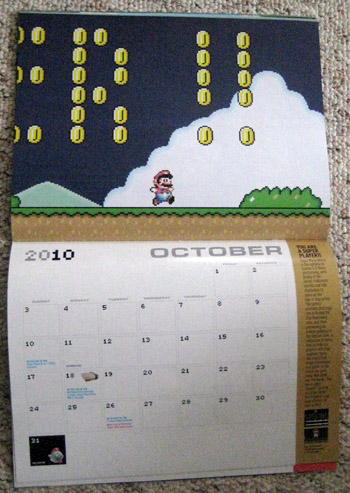 That was enough to part me with my money, but that’s still not all this calendar includes. Remember how super-cool it was back in the day, when every issue of Nintendo Power came with a tear-out videogame poster? (They may still do that, actually, but I stopped reading Nintendo Power when I noticed that, for some reason, it didn’t have reviews of games for my Sony PlayStation.) This calendar comes with those, too. Twelve of them. And, again, they’re not just of newer games—you can get posters of, for example, Link to the Past, and Metroid. The selection of newer-game posters isn’t bad either, as it includes games like Scribblenauts, A Boy and his Blob, and Link Rides Around on a Train, and totally discludes the games Nintendo usually promotes, like Wii Fit and Yet Another Collection of Minigames for Babies.

The total package costs $10, which I’m pretty sure I would’ve paid for either the calendar or the posters by themselves. But that’s still not all you get. You also get stickers!!!!! 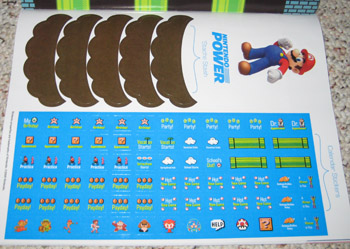 Most of the stickers are just meant to be placed on the calendar itself to designate specific days—for example, there’s a bunch of Question Block stickers that say “Appointment,” and there’s some stickers with Little Mac exercising that say “Practice,” etc.—but a few are just random 8-bit characters, like a Goomba, or Kid Icarus. Also, those brown turds in the upper-left corner of my above photograph? They’re mustaches.

THIS CALENDAR COMES WITH MUSTACHE STICKERS. IS IT LEGAL ANYWHERE FOR ME TO MARRY THIS CALENDAR.

I found this calendar at Blockbuster, in their magazines section—the calendar is actually printed like a magazine, I guess because it’s some special edition of Nintendo Power. I would’ve assumed you could find it pretty much anywhere that sells videogame magazines, though I couldn’t find it at GameStop or Target. (GameStop only sold Game Informer magazines—of course—and Target, because nobody told them Scary Larry had retired, was only stocking GamePro.) If you’re interested, I’d suggest grabbing it when you see it, because, as it’s being sold as a magazine, and not as a calendar, I’m not sure how long it’s going to stay in stock.

Knowing the inclinations of the rest of the GameCola staff, I'm putting myself in extreme danger by saying what I'm about to say. But the time has come to confess a terrible secret:It's been a long