The time the entire WORLD has been waiting for is finally upon us.  No, not “world peace,” or any of that other selfish stuff! It is the RETURN of the GREATEST videogame column of 12 generations! Those thumbs, those oh-so-super thumbs, are now back in action after a long hiatus. Buckle up and enjoy. This one is sure to tug at your heartstrings and flood you with more fond memories than you could ever hope to handle.

I will admit that the name really got to me at first. I really, really hated it. In fact…I kind of still do. GET AWAY, NUMBERS! GET OUT OF MY WORDS!! SPELLCHEEEEEEEEEEEEEEEEEEEEEEEECK! But once you get past the unfortunate spelling(/numbering?) problem, you are in for some action-packed fun! The name doesn’t lie—there are indeed zombies in this game.  In fact, there are lots of them. Along with some other weird things. This game boasts probably the greatest song in the history of games. Now that is a plus! If you haven’t heard it, well then check it out!

Now, it isn’t the kind of game you will be spending 255 hours playing…but then again, maybe you will. Either way, it just costs a dollar!

As it stands right now, there are not that many new RPGs floating around. This leads one to try out most, if not all, of the few that are floating around. It isn’t a pretty sight most of the time. DAMN YOU, INFINITE UNDISCOVERIES! Or whatever its name was. All I remember is the pain.

Sadly…the latest Star Ocean is only a few cuts above that low, low standard. There is nothing wrong with the combat system in this game. It’s pretty fun; you can definitely get into it. Learn its intricacies, and you can kick bad guy behinds all night and day with thrilling powerful attacks! 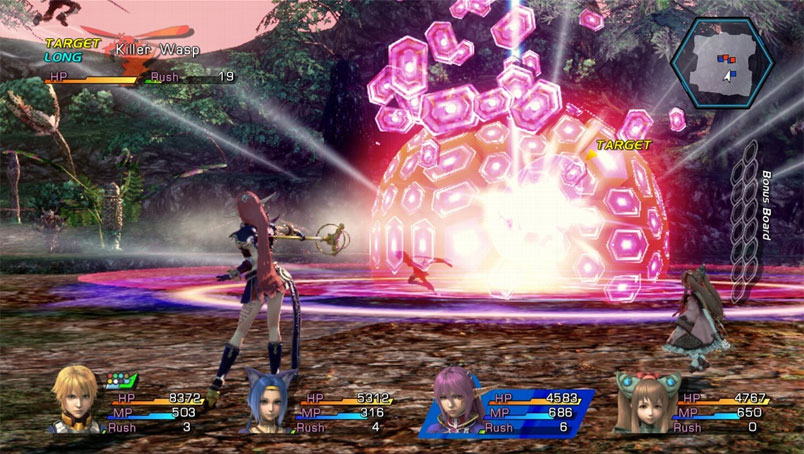 It has items like every RPG out there. Those are fine. You can even create them, if that is your cup of tea. However, the characters, their dialogue, the sounds of their voices,  the horribly bland generic story…did I mention the tragic downfall of the characters? LYMLE! YOU ARE THE THING NIGHTMARES ARE MADE OF! All these downfalls combine to create a game that you can play, but that you can also very easily not play.

This game was a bit of a pleasant surprise when I found it. I do not have much confidence in PSP games. Aside from the fantastic Monster Hunter series, they just seem to be lacking a lot. Of course, this is partly due to them being handheld games in the first place.

There is a lot more that probably could have done with this game. But for what it is, it’s pretty entertaining! It feels much like a bare bones, portable game in the vein of Valkyria Chronicles.  Though, that may be because I had just finished playing that game before this one… However! Time will tell us the answer to that when the Valkyria Chronicles PSP game does come out. Oh wonderful, wonderful fate.

If you are a PSP owner and into the Warhammer universe, you should get some enjoyment of this. If you love turn-based strategy, you should enjoy it as well. Oh…just never EVER try to play the multiplayer feature. It surely will make you weep.

Wow…well, there just is not much to say about this one. When the best thing about a game is ignoring EVERYTHING the game has to offer and spending your time running up and down buildings…you just may have a problem. This game does so many things wrong, it is more than a tad depressing. I mean, they had that hilarious commercial! How could it go wrong after that! Sadly, the combat is terrible, the story is bland, and the dialogue is atrocious. It may have been written by those Blair Witch kids, because every third word is FUCK. Even when the main character is describing what he had for breakfast.

…OK, that is a lie. This game would actually had been better if it devoted some time to breakfast talk, though. Yeah. That’s right. THAT’S A TRUE STATEMENT! Stay far, far away.

You can be Wolverine! You can slash MILLIONS of enemies up with your claws!! There may only be a few different kinds of enemies, but you can do it!! I have played a bunch of these Marvel/X-Men action RPGs. This one clearly did some fine-tuning, both noticeable and unnoticeable, because it’s A LOT more fun than any of the other ones I’ve played. I actually got through the entire game! WHOA! I didn’t even die that much! ME! NOT dying. Where is my damned medal. The story is compelling enough to keep you interested. The locations are pretty different, and you get to visit some fun real-life places. Hellooo, Metro station! I remember you! It may get a bit repetitive, but when you just want to bash and bash and bash like there is no tomorrow, then this game will certainly give you that fix.

So that was the INTENSE, amazing, spectacular return of everyone’s favorite thumbs. I know you all are breathing a bit easier now knowing that your true love is back in your life. For how long, though, nobody…kidding! The THUMBS will be back, again, and AGAIN on the regular! You can count on that. Until next time: ENJOY!

Fresh off of breathing new life into the Sam Max series with Sam Max: Season One,Telltale Games brings us the newest installment of their CSI game series. With Sam Max, Telltale did what seemed to