Disclaimer: This review contains a picture of “dancing dog,” and is rated R, for Ruff. 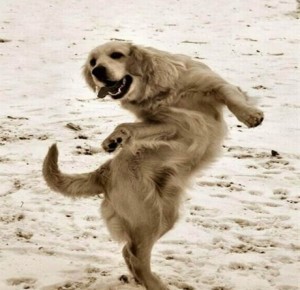 …So, university is a dumb waste of time so far. If I’d have known that “being lectured” stands for “being shouted at,” I’d have probably better spent these last few months teaching my dog how to dance.

Because the lectures on C programming were brain-numbingly boring, Doom RPG managed to find its way onto my phone. God bless mobile phones; they’re incredibly easy to hide. This 90s-FPS-classic-inspired RPG had, during that module, become my favorite time-wasting activity. But because of Doom RPG, I was quite behind on my work and had awful trouble catching up.

If you’ve played a single Doom game for any system, then I’m sure you’re aware that Doom is pretty much about killing everything that moves. And then some.

Doom RPG is no exception. You can expect to see enemies explode into small piles of putrid debris and large numbers of zombies, imps and dogs killed and/or mutilated.

I could make a joke about this being what generally happens around where I live, but that would be a lie, and it probably wouldn’t be funny. 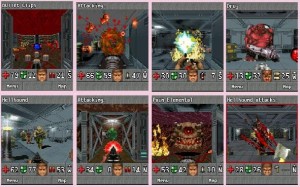 It’s not all about providing hellish abominations with their much-deserved comeuppances this time ’round. This time, you’re equipped with some skills that ring closer to home.

The chainsaw and fists have now been replaced with a fire axe, which you will use to chop down a thousand jammed doors. Also, you’re equipped with a fire extinguisher. This is used for putting out fires. BJ Blazkowicz of the Burning Rangers, at your service.

You will be required to put out more fires than you’d ever have to in reality. Funnily enough, though, this is Doom! Why a fire extinguisher? Why fires? Dammit!

I’m surprised you don’t have to help BJ microwave his dinner, run his errands, and work a boring 9-to-5 job to support his family (and, for the bad ending, further develop his drinking problem).

This pseudo-sensical Doom-inspired mess of ideas would not be complete without the Pokémon-esque capture of mutant dogs to fight your battles for you.

Of course, Madou Monogatari and Daggerfall are two great examples of RPGs in the first-person perspective, and Doom RPG doesn’t fail to disappoint in this category.

In this RPG format, Doom actually functions incredibly well. Seeing as the original game was built on math—specific guns inflicting specific damage, how much damage a bullet does from what distance, how many rounds a weapon uses when it fires—it pretty much sounds like RPG logic to begin with.

And without magic spells or complicated stats, Doom RPG doesn’t confuse in the way that all those Japanese RPGs do. But as it goes with RPGs, each of Doom RPG’s successors attempts to add extra features that weren’t present before.

The system in Doom RPG is incredibly easy to comprehend, and within minutes you’re zoned into the game, putting out fires and chopping down doors with vigor. You might just get to kill a zombie, but don’t get your hopes up! After all, you are the only person qualified to put out fires on Mars!

In the first-person format, Doom RPG feels more like the classic Wolfenstein 3D than the series it is actually based off. This is especially because of the maze-like structure to the levels and the primitive controls (of course, this is because the game is designed for cell phones, and is therefore incredibly limited).

Seeing as the hardware is limited, I shouldn’t be so cruel about the awful sound. But there is a complete lack of music once you get into gameplay, and the sound effects, although charming, sound nothing like what they’re meant to—and occasionally don’t play at all! As for the graphics, they are about half-and-half lifted from old id Software games. Both the audio and the visuals seem a bit clumsy, and if the game didn’t suck here, its Overall score wouldn’t have to suffer as much as it does.

Doom RPG is an example of a successful time-wasting activity; I pumped so many hours into it and I didn’t even realise it. Clocking up to seven hours of gameplay, and crushing the final boss, I was given the ability to start all over with everything I collected.

Seeing the ending for a second time, I couldn’t believe another seven hours went that quickly. With practically no limit to the levelling up (I have exceeded Level 100), you could potentially play this game for the rest of eternity.

Orcs & Elves, Orcs & Elves 2 and Wolfenstein RPG have also been developed by the same team. I felt that Doom RPG retains classic RPG function, whereas its three spiritual sequels do not appeal to me through their complex systems and higher difficulties.

On a final note, the humor in Doom RPG is probably the best reason to play it through. It has plenty of witty jokes that poke fun at the game itself, and at classic Doom. (“I’ve been playing this old game called Doom. It’s surprising just how similar it is to our current situation.”)

A sequel is in development, and expected soon. Good news, as my timetable is chock full of lectures once again.

Gah, go in for a two-hour workshop at 2 p.m.? What is this? Fuckwit University?

Our boy returns! Oh, and some other stuff happens, too.