It has been a furry long time since I last reviewed a game with an anthropomorphic main character, and I guess that’s because they are a guilty pleasure of mine—the games, not the anthropomorphic ladies and their slender figures and…fine, you caught me. Main character Kit Ballard goes a long way toward being the saving grace of this game.

Something about these childish platformers fills my heart with warmth, in the place usually reserved for games like Rockin’ Pretty and Project DIVA. I guess that every now and then I just want to have fun, and not get weighed down with how much I hate Duke Nukem Forever or how disappointed I am in the Nintendo 3DS. I’ve needed a break lately, so I’ve been going back to Blade Kitten and getting more of the hidden collectibles.

Just because I love games starring Mega Mammals doesn’t mean that I’m blind to their shortcomings (although it does make me slightly more forgiving of them). Case in point: Blade Kitten. This game is essentially a quasi-erratic attempt at recreating some of those fine “Metroidvania” games. Despite imitating those adventure titles, Blade Kitten is based around a level structure, which works in its favor due to the way the game’s collectibles are implemented. There is still plenty of exploration and plenty of hidden secrets to find, which suits me just fine, and it’s just one of those games you can come back to after three months and know exactly what’s left to do. 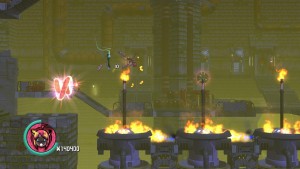 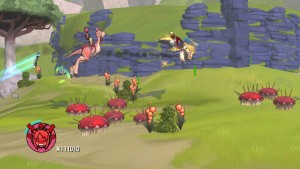 Based off the webcomic by Steve Stamatiadis, Blade Kitten stays mostly true to its roots. This is due to Steve being strongly involved with the game. I say “strongly involved”—he’s only the Creative Director, as well as the Game Designer, Art Director, and Character Designer. This project is effectively his…whatever Star Wars is to George Lucas. The story was written exclusively for the game, taking place in a designated point within the webcomic itself. This is very much unlike On the Rain-Slick Precipice of Darkness, which (besides having characters from Penny Arcade) doesn’t actually have any kind of plot connection to its associated webcomic.

But when did Penny Arcade have a proper story, anyway? (Or humor?)

If you haven’t read any of the Blade Kitten webcomic, there are some things that won’t make sense for you; but for the most part this doesn’t matter. The story is the means to an end in this one. As long as you enjoy a long trek across space countryside, you’re going to enjoy the game regardless of its glitched physics and improper collision detection, confusing culling system, and plasticine characters.

The art direction is, to a point, very specific and finely tuned. I welcome the camera pulling out while you’re moving and pulling in when you’re stationary, and I approve completely the large size of each level. This is pretty much the modern-day Apogee platformer, and not just something to ignore completely, such as a parking ticket or your full name. 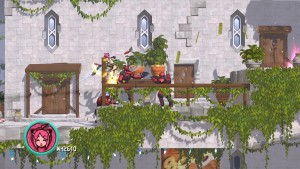 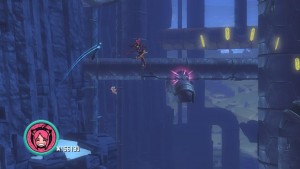 To enjoy Blade Kitten, you’ve got to be able to tolerate the graphical style. While I appreciate the decisions made from a visual standpoint, even I can’t disagree with the observation that the characters stand out from the background worse than a nudist at a Where’s Waldo? convention. That’s not all; there’s this shader applied to everything that makes it look like the game’s been modeled with Play-Doh. I understand why this has been done—so that, screenshot for screenshot, the game sometimes looks inseparable from the webcomic. I’m not against this style, but I know that a lot of people are.

Whilst trying to maintain that fun platforming feel, the game is not without glitches, and as is the case with Sonic Adventure and Damnation, most of these glitches are surrounding the collision detection system. There are times when poor Kit Ballard goes headfirst into a wall, gets sucked through it and then cannot progress anywhere, requiring you to reload your last checkpoint. A few tweaks to the collision detection or better-placed collider boxes wouldn’t go amiss.

Also, trying to cover sections with rock or electrical traps may be the quickest way of blocking off an area, but I have to suggest an alternative method. How about an area of the level, possibly darkened by mist or fog, that kills you if you stay inside it for too long? Even if people were to try climbing through it to find areas they shouldn’t reach until later, the smog would dispatch them long before they could make it. Damn—this is why I should be a game designer. 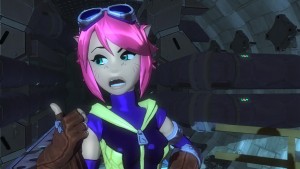 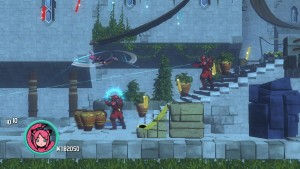 Once you’ve played one level, you’ve played them all. Within two levels, you’ve seen all the main gimmicks in the game. So Blade Kitten doesn’t win any level-design awards, but I don’t think it should worry about that. As far as it goes, Blade Kitten is a fine platformer with a few redeeming features, such as a mass of stuff to unlock. The number of levels spans into the double figures, so if you’re just looking for a game to grind away at, this is as good as any.

I am very much looking forward to the second part of the game and holding out hope for its release, despite Krome Studios’ current difficult situation. I hope we can spend some more quality time together, my darling Kit. I also pray that Kitty Kazawa Freelance Exorcist can get the same Krome treatment at some point, or at least make it as an alternate outfit in Blade Kitten: Part 2.

WELCOME! This is the latest, greatest and absolute best version of THE SUPER THUMBS you will be viewing this month!  We're coming back strong after a month of pixilated awesomeness that I thought co