If you take one look at Rockin’ Pretty, you can tell instantly why I’m drawn to it (especially if you’re familiar with my previous reviews for GameCola.) It might be girly, sure, but this isn’t Lovely Lisa. This isn’t a drizzle of drivel; it’s an award-winner, in my eyes. 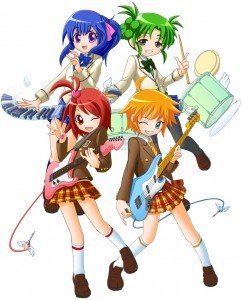 The main cast consists of four cute girls: Mai, Kara, Mio and Reena. They play instruments in a fictional band named Starlight, and their goal is to take part in the Rockin’ Pretty tournament. (It’s a just-for-fun thing, but they’d still like to win.) It is your job to play the instruments for Starlight and, depending on the difficulty you play on, help them succeed with their dream.

Visually, Rockin’ Pretty manages to look good, despite the graphical incapabilities of the Nintendo DS. (Since it’s a DS game, those sharp edges are normal.) At least the girls are cute (and you know that’s the main thing), so all is right with the world. Moreover, Rockin’ Pretty also has a smooth and fast framerate (one that doesn’t show any signs of slow-down)—similar to the Nintendo DS version of Sonic & Sega All-Stars Racing, which, despite having ugly graphics, still looks exceptionally good, thanks to the smooth, constant speed.

And “looking good” brings us back to those cute girls again. They have faces sharper than a Gillette-branded razor during gameplay, but they are drawn in a simple but effective anime style during dialogue scenes. The character artwork fits with the characters’ expressions, which overall makes the game mold very well.

Rockin’ Pretty is a game that’s both deceptively challenging and enjoyable. I’m sure you wouldn’t expect a game with cheerful schoolgirls to give you a run for your money, but it does. The difficulty works to Rockin’ Pretty‘s advantage, because otherwise, it might’ve been a totally skippable game. 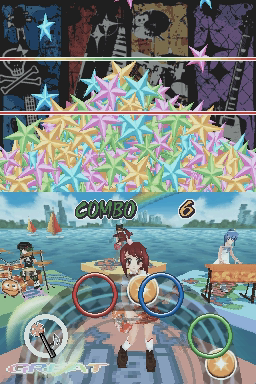 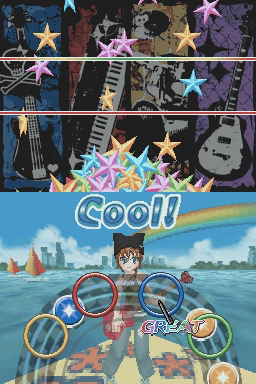 If you’re still struck with the World Tour disease, then you’re in luck, because Rockin’ Pretty allows you to play four different instruments. The electric and bass guitars, the keyboard, and the drums—that’s two more instruments than the DS Guitar Hero titles! All four instruments have unique playing methods that cleverly utilise the Nintendo DS touch-screen, avoiding the need for the badly designed DS Guitar Hero and Band Hero peripherals that aren’t compatible with the original DS and the DSi. The guitar uses two lanes for notes (to allow for double strums), whereas the bass has only one line (to create a realistic plucking effect). The keyboard shows notes that must be tapped as a line of light penetrates them, and the drums require tapping in four different circles. It’s tricky, but if it wasn’t, Rockin’ Pretty may have been another regretted purchase.

To turn the game’s difficulty slider from “Easy” to “Ridiculous,” Arc System Works decided that, in Rockin’ Pretty, notes travel at the same speed, but from different distances, depending on where they are to be played. To explain this in real-life terms (separate yourself from videogames for a second), notes are played on a guitar by holding your finger(s) at a certain place on the fretboard.  Rockin’ Pretty tries to emulate the concept of playing an actual guitar (and does so much better than Guitar Hero), but it can become challenging, as it requires notes to be played sooner or later based not only on the color, but also the distance.

I know it sounds confusing, and it’s definitely as confusing as you think. I’d go as far as to say it is rewardingly difficult, though, because when if you beat a song, you feel like you’ve earned that victory.

If you score enough stars during a song (you have to play the song unfathomably well), then you can play the star-catching minigame. In this minigame, a torrent of falling stars blasts across the screen, and you have to catch them with your stylus. Collect enough and you make white stars appear, which are worth more. Collect enough white stars in a row, and they appear much more frequently. All the time, you have to avoid star-shaped “Boo!” messages that fly across the screen, or you’ll lose stars. 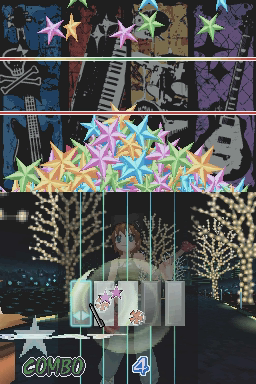 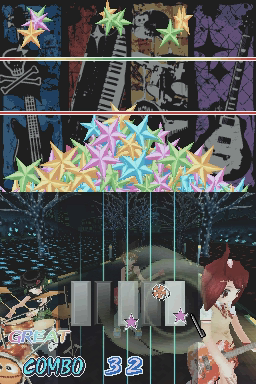 Regarding the keyboard’s on-screen interface, using lines to know which note to press is much harder than reading notes as they travel down a highway. I’m used to Guitar Hero—if you give me a colored button, I’ll hit it when the corresponding shape comes along, but Rockin’ Pretty doesn’t do keyboard controls the orthodox way at all. Actually, none of the controls are really that orthodox. I used to like the bass guitar controls, but when I recently replayed Rockin’ Pretty in order to write this review, I could barely hit any of them. Either a design flaw, or I’m not hitting them straight.

Controls are merely the means to an end, and Rockin’ Pretty does end rather abruptly. It’s a short game, and it’s likely not intended to be played from start to finish. It takes barely an hour to complete. The progression of the game is through stages that consist of only one or two songs. You can play them on any instrument (in fact, you can play through the whole game with only one instrument and still unlock everything). Stars collected along the way are converted into money to be spent on outfits, hairstyles and instruments. I still haven’t bought everything in the shop, so there is some longevity there if you feel the urge to purchase everything.

For almost a year on, Rockin’ Pretty hasn’t aged that much. But there are many more alternatives available (Kira Kira Pop Princess and Osu Tatakae Ouendan/Elite Beat Agents), so Rockin’ Pretty serves much more as an inbetweener for the Grade-A rhythm titles. 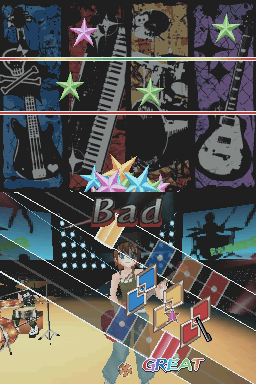 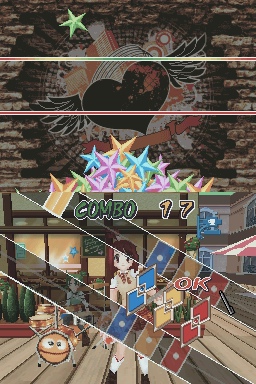 Now, I want to get this out of the way—the ending you get does seem slightly random. You’re not necessarily guaranteed a specific ending; it’s based on having beaten most or all of the songs on one difficulty, and your performance during the final song. Playing the majority of songs on either Easy or Normal will result in either the “slightly bad” or “bad” endings, which are rather anti-climactic. Starlight makes it to the final, but loses to the boy-band “The Dreamboats” (no, really). If you play all the songs on Hard, pray to a non-existent religious being, and dance the fandango, then you might just earn your girls a sponsorship and/or record deal—the proper ending. On paper, it sounds cool to limit the good ending to people who play the songs on Hard, but I feel bad for the kids who get this game and a pink DSi for Christmas this year, because they won’t have a clue in hell why their band got all the way to the end and lost.

The final song of the game, “Rockin’ Nova,”  is very tricky on all four instruments (if you’re playing on Hard). It might not be the “Jumpin’ Jack Flash” and “Samurai Blue” that caused no end of trouble for us cheerleading secret agents, but it will be way too difficult for little Gracie (who’d rather look after virtual dogs anyway).

While I’m disappointing the younger audience, I regret to inform you that there is no sign of the “love” stated in the press release. I’m not particularly bothered, but I know a lot of people played and enjoyed Princess Debut, and from what I can tell, that game was very much driven by its romantic storylines. If you’re a fan of that, be forewarned that there’s none of that in this game.

Buggy endings and lies about love aside (isn’t love just one big lie anyway?), I’m glad I decided to help Starlight. Although Rockin’ Pretty has girly written all over it in felt-tipped markers, you’d be damned if you assumed it’s easy. If it’s harder, it’s more fun. Unless it’s Zool hard. 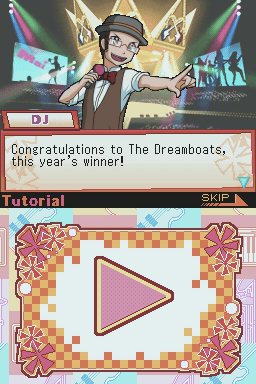 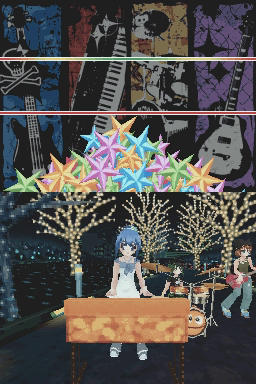 Arc System Works also developed the Guilty Gear series. Coming from a developer like Arc, you know this game’s gotta be worth a shot. I’m afraid that my favourite gender-questionable rockstar witch from the Guilty Gear series doesn’t appear in Rockin’ Pretty, though, as great/bad as her inclusion could have been.

The one thing that slightly lets Rockin’ Pretty down for me is that there are no licensed songs. Then again, having a unique soundtrack means that there is no need to over-price the game (seriously, solus Rock Band 2 was £50 on its release, which is stupid). Also, having its own soundtrack guarantees that the score will fit the game’s design and nature.

The soundtrack tends to focus around the “12-bar blues,” and many of the songs focus on the same chord structure. You effectively play the same song multiple times with different picking styles, which isn’t as creative as it had the potential to be. Some of the tunes in the game are absolutely beautiful, and they show us once again that Arc System Works has some really good composers on their team. More of that and less of the cop-out blues format might have saved the soundtrack from ridicule. Also, would it have hurt to have thrown a Guilty Gear song in there? Namco does it all the time with Taiko no Tatsujin, putting random songs from their videogame library into their rhythm games.

If you’re European like me, I must insist that you avoid Diva Girls: Making the Music, which is the European release for this game. Remember Princess on Ice? That’s what they’ve done, AGAIN (not learning from their mistakes, I see). The game still plays the same, but the story, song names, and dialogue have been heavily altered to make the game fit the teenage market. Well, without the anime graphics and story about the RP Tournament, the game is just completely skippable in every way. Let’s face it—if you want this game, you want it for the cute girls (at least partly). A suitable replacement is the amazing Kira Kira Pop Princess, which remains mostly unaltered from its Japanese release, and has a nice hard difficulty mode, too. Or, you could import Rockin’ Pretty from somewhere like Play-Asia (ignore the false screenshots; that was a press-related issue).

Give Rockin’ Pretty a chance—especially now that it’s no longer at full price. The game is a blast. The music might not be all there, and the story could do with a little more substance, but it has all the makings of a genuine hit. Four pretty girls, four instruments, a career mode, and a photo studio; I certainly couldn’t ask for much more than this.

Terrence Atkins draws the keywords YOU Googled to discover GameCola.