The Nintendo 3DS has been hailed as the cure for cancer, or at least, that is what Nintendo would like you to believe. “It will make you younger, fitter, more attractive to men and more attractive to women. It will increase your I.Q. and improve your eyesight,” said Reggie Fils-Aime at Imagination Convention (Imagicon). “The Nintendo 3DS is everything you could want. It will cook your breakfast for you. It will also make you money and act as your own personal whore, crossing the borderline between real and virtual relationships.”

These are promises that have not been delivered, perhaps primarily for the reason that I made them up. Besides the fictional promises, there is also a distinct lack of features that we actually were promised.

First off, there should be an Internet browser on the handheld, or at least that is what we were promised.

Well, that will be “coming soon.”

Secondly, we were promised the DSiWare store and the 3DS Virtual Console.

These services haven’t yet appeared on the 3DS, although a sheet of paper inside the box promises that they are on the way, showing screenshots of the service itself. So either those are mocked-up screenshots, or you’re holding back on us, Nintendo.

Anyway, should I be getting excited over the prospect of wasting more money on virtual content? I already spend bucket-loads of virtual money on Xbox Live and the AppStore. I think my excitement comes from the possibility that I could play Link’s Awakening on the go. Of course, buying the original cartridge on eBay would probably cost significantly less than this dumb handheld. 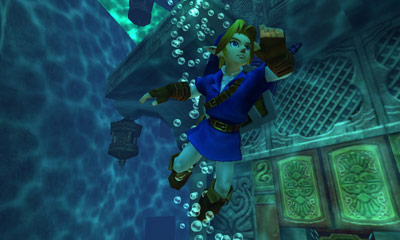 These services are expected to launch on June 7th (at the earliest). The downside of this is that until the day this content arrives, my 3DS remains in a state of limbo. For at least three more weeks, I’ll only be playing Ridge Racer and Face Raiders, games that I’m already bored of. Also, the store is scheduled to become available around the time Duke Nukem Forever is released. Am I going to be browsing the Nintendo Store when Nukem hits? NO. I’m going to be ogling virtual strippers and blowing the shit out of some aliens. My 3DS will be sitting in the corner, downloading demos and 3D trailers, while I roast some extra-terrestrial chestnuts on an open fire. If you couldn’t tell, I obviously cannot wait for Duke Nukem Forever.

I am definitely appreciating the Home Menu, something the DS has been needing quite severely. It offers plenty of features even while games are currently running, such as the ability to write notes, or show a friends list that indicates which friends are online and what games they are playing. There is bugger-all use for that, though. The online play: where is it?

This is more down to the developer of each game, sure, but the lack of online play in Ridge Racer 3D results in making this new handheld seem less capable than the DS. At least the DS gave me Mario Kart races against complete strangers and huge Puyo Puyo Fever battles. I haven’t seen anything really remarkable in the area of online with this handheld so far, and I’m starting to freak out that maybe the Internet and online play was all a sick joke. 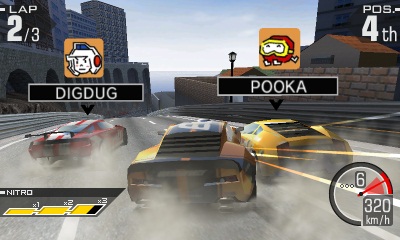 No online in Ridge Racer 3DS is an insult.

After the gimmick of the 3D visuals wears off, what else is there? I guess there isn’t much. I play the system with the 3D mostly turned to the off position, or only slightly enabled. For a system named after this effect, the effect certainly isn’t wonderful. I haven’t experienced many of these headaches that others complain about, but that is probably because I can not just cross my eyes, but actually force one eye to move whilst the other one stays still. Great party trick, actually.

Is it sad that the two games I am really looking forward to are remakes of games released over ten years ago? Have Nintendo created a fresh in-house IP in the last three years? Or have they just re-released Mario games from the GameCube with terrible Wii controls added in?

Get the store up, get Ocarina of Time on the shelves. And be damn quick about it. The features on this system such as Face Raiders and the Mii StreetPass Plaza are excellent, but they cannot carry the system.

Zelda can, and will, spell the success of the Nintendo 3DS. There’s no time—hurry up.

Over the summer one of the greatest re-releases came out that I myself, and I’m sure many on the GC staff, have been orgasiming in their pants over. Mega Man Anthologies came out with all the origin ...