Eternal Sonata had a lot of promise. Not only was it a much-needed RPG on the Xbox 360, but it looked like it was going to break the J-RPG mold by blending action-RPG elements with a turn-based RPG framework and incorporating a novel plotline. As opposed to the standard “evil guy X is going to destroy large geographic area Y and ragtag group of good guys Z has to save it,” the game takes the unlikely and very rarely traveled route of historical fantasy—it’s set in a music-based fantasy world existing in the mind of Frederic Francois Chopin as he lays on his deathbed in the final throes of his long battle with tuberculosis.

I’m not going to lie to you: I’m one boring bastard. I watch documentaries constantly, read textbooks for fun, and collect different editions of Trivial Pursuit. So, if you haven’t already discredited me and left this website never to return, it won’t come as a surprise that when I heard a J-RPG based around Chopin was coming to the States, I was so excited that I nearly shat confetti.

This game seemed to be a gift from our friends overseas—one that would help the 360 dig out of its lack-of-RPGs rut and pave the way for more than just Halo facsimiles. Unfortunately, Eternal Sonata, like my sexual performance, fails to deliver in a great many ways.

Before I delve into this game’s negatives, I’ll be fair and discuss the positives. I will say that the game is one of the most aesthetically stunning I’ve seen in quite a while, and it was a much appreciated break from the sea of brown/gray games flooding the market. Also, fitting the theme of the game, the music is very well composed and flows nicely.

There, the good stuff is out of the way. I can now commence with my one-man shitstorm. 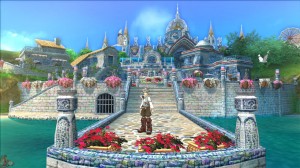 You’ll notice that I didn’t include Eternal Sonata’s novel story concept on the short list of things this game did right. The unfortunate fact is that the originality of the plot wears off very quickly after you find out that Chopin’s musical fantasy world was, apparently, nothing more than a vapid, cookie-cutter J-RPG world populated with none but the most one-dimensional J-RPG archetypes. The good guy with an “attitude,” the sweet-as-sugar timid girl, the annoying little idiot, the saucy little tomboy—the characters you’ve seen in countless other J-RPGs are all here, just with new, music-based names. Not only are the characters shallow, but the great story concept writes a check that the actual in-game storyline can’t cash, delivering instead a poorly written, disgustingly preachy, goofy and disjointed J-turd of a story.

I will admit that the game has one other very important thing going for it—its battle system. Eternal Sonata is one of the only games that I’ve ever played that properly blends action- and turn-based RPG elements without making a final product that feels clumsy. You’re given a time limit in which you can rack up as many hits as possible on your enemies; the more hits you get, the more “echoes” you receive, which strengthen your special attacks. However, I mention this separately from the other things the game does right because the great battle system only makes it more tragic that the game suffers from such abject laziness.

One of the worst demonstrations of laziness in the game is its bad case of Final Fight Syndrome, where enemies you have fought 100 times before are painted a new color and passed off as completely new enemies. The game probably has less than 10 actual enemies in total, none of them particularly memorable.

One of the game’s biggest problems is that you have to sit through a 10+ minute long cutscene before and after damn near every fight. The cutscenes are skippable, but I wouldn’t recommend doing so, because, the one time I tried it, I ended up being spit into a new land not knowing where the hell I was expected to go or what I was supposed to do when I got there. This wouldn’t be nearly as painful if the cutscenes were at least watchable. Alas, no such luck, as all of the dialog goes one of two ways—either making a shallow attempt at furthering a plotline so ridiculously trite and sappy it would make Morrissey’s diary look like an issue of Soldier of Fortune, or making a ham-handed attempt at some contrived social commentary that comes across about as subtly as a cinder block to the face. Also, as a reward for completing a certain level, you are given—that’s right—more cutscenes. These cutscenes don’t have anything to do with the game, per se, but rather just provide a narrative history of Chopin’s life. Thankfully, you can safely skip these. 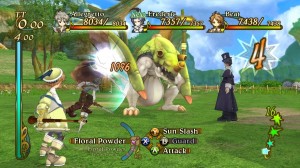 The laziness really takes its toll around hour 10 of gameplay. This is when you realize that, despite how great the first hour of gameplay was, that was it. The gameplay isn’t changing, there are no new enemies, the storyline is going to continue being stupid, the cutscenes aren’t going to let up any time soon, you’ll never be able to roam around freely, and there will never be any sidequests. This is where you start running out of steam, sometimes even earlier in the game, and it becomes a chore where you keep telling yourself, “goddamn it, I wasted 10 hours of my life, I have to waste another 10 to see how it ends, at least.” In this situation, “waste” is truly the operable word, as the ending, without giving any spoilers, leaves you thinking “What?! It’s over?! What just happened and why?!”

I’m still convinced that Eternal Sonata is the Japanese equivalent of the classic joke “The Aristocrats.” It’s hyped up as being great, but when you actually hear it, it disgusts you, and at the end you’re left thinking “I can’t believe I sat around that long waiting for what was, in the end, a giant waste of my time.” But, despite all the negative things I have to say about it, Eternal Sonata did some very key things right, and I would actually love to see a sequel that works out all the kinks and delivers the game that Eternal Sonata should have been.  But that’s not gonna happen.

[This review was shamelessly reposted from slothbot.com.]

The latest trailer for the indie platformer Super Meat Boy comes to us straight from the mad men of the 1990s, complete with deranged spirals, eyeballs, shouting, and the promised destruction of y