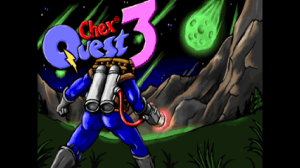 OK, just a quick note—I have reviewed, and will continue to review, a lot of games that are like Doom. Doom is synonymous with all first-person shooters—and this is because it was the first major success in this genre besides Wolfenstein 3D (and Rise of the Triad, if you’ve even heard of that).

First-person shooters owe a lot to Doom—why? The glorification of violence from the implied viewpoint of the user. And Doom hit us hard with the killing, and blood spilling, and guns, including shotguns, rocket launchers, and the infamous BFG. Everything you destroy may explode into a bloody mess, and when that happens, it is most satisfying.

Doom, however, is a game rated for adult audiences. Sure, you might have played Doom when you weren’t, say, eighteen years of age. I’m not going to dwell on what it may or may not have done to your fragile little mind.

Doom pretty much paved the way for the FPS genre, and if you haven’t played it, you haven’t experienced the thrills it has to offer. Hell, you haven’t lived a life worth living.

Unless you really liked cereal in the early nineties, that is. 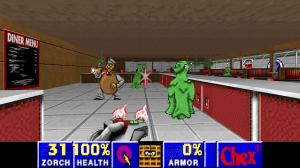 Egged on by their management to find a way to promote Chex cereal, Digital Café decided to create a computer game and package it with boxes of cereal. (I remember companies in the UK eventually trying this, like the Kinder Egg promotion).

Chex Quest was the result of Digital Café’s foray into videogames. It plays like Doom, it feels like Doom, but it sure as hell isn’t Doom. There is no blood, no guns and no violence. Doom was all about violence, but cereal is consumed by large numbers of children. So a game packaged with cereal couldn’t be about killing demons from hell (well, it could, but there would be a lot of dead parents).

“Why? Why did you kill all these people? What has gotten into you, son?” “I was told that to make them go away, all I had to do was make them snap, crackle and pop.”

In Chex Quest, the premise is to “zorch” Flemoids back to the Flem Dimension. Because you cannot kill them, you have to teleport them back to where they’re from. In that regard, you’re practically removing them, but in a way devoid of blood and carnage.

Chex Quest was a major success and helped sell a lot of cereal. 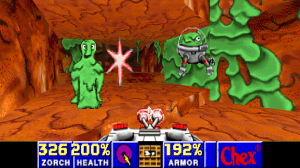 One year after Chex Quest, a sequel was developed for the Chex Quest website, as a free download. It consisted of another five levels, this time much better designed. It was practically the same game as before.

Then, after a long time of silence, two of the original team members offered forth Chex Quest 3, the new child to bear its predecessor’s name. And how does it fair? It blows the last two games out of the milk.

Chex Quest 3 contains the two episodes from the previous Chex Quest games, as well as a brand new episode, with new monsters, music and art. It is much like comparing Metal Gear Solid 3 to Subsistence. More areas, more stuff, and new features.

The goal is the same as always, and as gore free as always. It uses a modified version of the popular zDoom source port. zDoom enables high-resolution up to my stunning 1600×900 display. It can render the game in OpenGL (an open-source graphics library), that allows for higher quality texturing, lighting and other features. zDoom also supports Z-Depth, something the original Doom did not—objects can actually have their own height, meaning you can land on top of enemies (what I like to refer to as crowd surfing).

zDoom also introduces the ability to jump, not present in the previous Chex Quest titles. This feature makes a few of the levels from the previous installments beatable in record time, however. I suppose this is just an oversight that needs seeing to, but I didn’t realise I had beaten one or two levels incorrectly until I watched runs made by other people on YouTube. 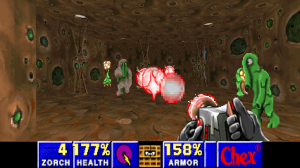 Built off of Doom, there isn’t much I can say to describe the gameplay without reviewing Doom, and I’m sure you’ve all played Doom…right? You have, right?

If you wish to become a “cereal killer” (get it?), you can download Chex Quest 3 for free at the official site. It may help keep your appetite in Chex.