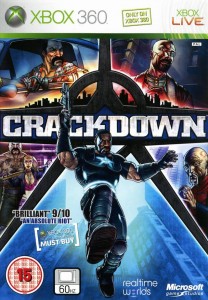 Crackdown is huge. It’s the game I hold accountable for inventing the “Magic City Man” genre. That’s one thing I love about it—sandbox freedom. I’ll probably never get all 700 collectibles in this game, nor do I care—I didn’t even know there was a guide for them.

Not only on the collectibles front, but the whole game is difficult. It’s fun, and it really sucks you in, but the difficulty is designed for at least two players. Crackdown only supports one or two players.

Grand Theft Auto with superheroes, Crackdown is like a current day Naruto: Rise of a Ninja (without the hideous voice overs). Its every aspect is beautiful, down to the quasi-cel shaded comic book look, giving the city a Batman’s Gotham-esque touch. The whole thing constantly leaves you feeling like some kind of futuristic Spider-Man, tackling crime for the good of the city, in a vain attempt to forget watching your Uncle Ben die in your arms.

The goal is to assasinate 21 gang leaders (three gangs, each consisting of six lieutenants and a kingpin). You can go in guns blazing and you might just take out the leader, but it’s not advised, and besides, killing them all nets you Achievements, so you’ll want to do it the long way.

The long way is to strategically take out gang lieutenants to make their forces weaker in particular ways. Taking out the firearms expert may make the gang less accurate, and perhaps dwindle their ammunition supplies.

Doing this lightens the defenses surrounding the gang lieutenants, so you can take the leader on without breaking into the sweat you would have otherwise. It is a game that congratulates you if you search around and poke your nose into enemy business, rather than taking your targets head on.

Unless you’re talking about the Shai Gen leader, who is just ridiculously hard anyway. But you know how good it feels when frustration turns into relief—if I hadn’t played Crackdown, I’d still be the shallow person I am. 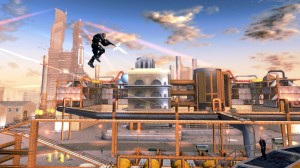 If you’ve played the demo of Crackdown, you will have noticed the strengths and abilities you can unlock. Sadly, it takes a lot longer to unlock them in the final game (and a bit of grinding once you’re about half-way through).

Once you get over this hump of disappointment, the game becomes somewhat enjoyable but also increasingly challenging.

You’re not gonna beat this game without dying a couple of hundred times.

But Crackdown is not without flaws—here are a few I observed earlier.

Now I can forgive shooting enemies and them falling through the floor, but the precision auto-aim will often stick to a target that is dead and won’t cycle to the correct person. Well, shooting at the ground has always been my idea of fun!

Also, climbing buildings is a curse and a half—requiring a “jump backward then move forward” approach. Sure, this was before Assassin’s Creed brought in the rules for climbing in videogames, but it should still be at least somewhat fluid, seeing as you’re required to do it so often.

Of course, if you’re awfully unlucky, you might just fall through a building when you’re climbing, and end up here. 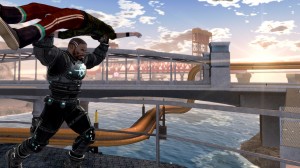 The only other issue I have with this game is the announcer. Someone decided it would be brilliant to have an announcer in this game.

The announcer will get on your tits. The options menu is worth a visit, should you ever need to ball-gag the chatty fucker.

Get over these disappointments and it is certainly worth buying. The premium DLC is arguably not worth your spondoolah, as it adds achievements and extras to the game that require exploits to be feasibly unlockable.

But do download the free DLC, including the “Keys to the City” mode. It gives you access to a user-friendly debugging menu, allowing you to do anything you’ve ever wanted to do. Of course, you can’t earn achievements in this mode, but when you’re flying through the air in a giant truck, or glitching your way underground, you find yourself actually playing for fun.

A worthy note is that, now it has been ages since the game came out, it’s very cheap. It was packaged with a Halo 3 beta invitation, so naturally, everybody who wanted Halo 3 bought Crackdown. But that means Crackdown has been bought a load of times, so it is available in the Classic range, or dirt cheap in bargain bins everywhere.

It will probably cost as much as your take-out on a Friday night. I just don’t suggest you eat the disc by accident, because you’d probably die. 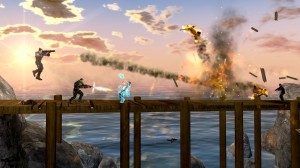 Since writing this review on my old blog, Crackdown 2 was confirmed at E3 2009. Videos have been released, and it looks like it will be very much just more of the same. Well, that’s another game sold to me this year.

But remember… No matter where you are, or what you do, The Agency is aware. Break the law, and they’ll send out an elite team of peacekeepers to bring you down. So, no funny business, all right?

[Adapted from the original review.]

Ikaruga is addictive and wicked hard.