Whenever people make a list of “the top 10 games of all time”, The Legend of Zelda: Ocarina of Time inevitably appears. People generally justify this decision by pointing to the game’s interesting characters, solid puzzles, intriguing plotline, and lack of cartoony graphics. What’s not to like? 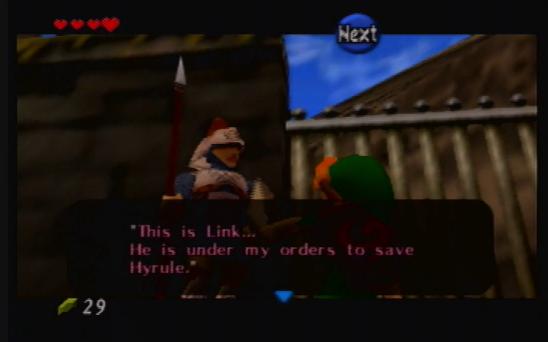 When Princess Zelda HERSELF orders you to save the world, you know you should obey.

The game follows the adventures of a young boy named Link who teams up with Princess Zelda to try to stop the evil wizard Ganondorf from taking over the world. Ganondorf is pretending to be loyal to the King, but he’s secretly doing evil things to stir up civil unrest (like kidnapping princesses and starting food shortages), so it doesn’t take a genius to realize he’s after world domination. Can Link and Zelda right the wrongs that Ganondorf has committed? Can they get to the super-powerful Triforce before Ganondorf does? In other words, will our spunky 10-year-old heroes be able to save the world?

That’s enough for a great game in itself, but the Zelda formula dictates that each game must have a dual overworld. In this game, the dual worlds are Past World/Future World. That’s right: Link gets to travel back and forth through time in this game. Only by playing as both Child Link and Adult Link can you solve the various problems in both times and defeat Ganondorf. It’s pretty fun, even if I still don’t understand if they’re using the Back to the Future or the Dragon Ball Z time travel model (that’s “one universe” or “multiple universes”, for those of you who don’t speak GameCola).

GameCola staff member Michael Gray (thaaat’s me!) recently finished a video walkthrough for Ocarina of Time, completing it in about 10 hours and including helpful notes such as, “If you don’t want to see this dungeon, skip to Part 14, where I finish it.” If you haven’t played the game before, you might want to glance through the video walkthrough to see what all the fuss is about. You might want to check it out if you have played the game before, too, because Michael plays the original, uncensored Golden Cartridge edition. Later versions cut out various inappropriate parts of the game, like Ganondorf coughing up blood (4:56 of the video above) and all references to Islam.