I’ve been playing the Xbox 360 a lot lately. Warn Sony that my love for them has sunk once again—Microsoft has this market dominated, in my most gracious and humble opinion.

And dominated your arse will be when playing Dead or Alive, for no matter the game nor the genre, every Team Ninja venture is a nightmare waiting to happen. They’ve always had a thing for challenging, beautiful games, which makes me ponder whether they’ll dumb down Metroid: Other M, or stick to their tradition.

Dead or Alive 4 is painfully harsh. Whereas the button mashers amongst us can prevail (eventually), the game focuses heavily on blocking and dodging, which is much easier said than done.

Well, actually, the whole game is easier said than done. While the difficulty level seems to stay in one place, reaching that place is like climbing Mt. Everest in just your underpants.

The training mode has a lovely exercise system designed to teach you combos, but it does little in the way of explaining them. By the time it wants you to do Izuna-Otoshi throw combos, you’re more likely to throw the game out of the window. Nothing like some good frustration to raise your determination.

Therefore, we have ascertained that Dead or Alive 4 is very difficult—so if you’re not a fighting game expert, this is not your game, just like Guilty Gear. If you’re more into cartoony brawlers (note: games where winning is possible), then stay clear of Dead or Alive. Period. Full stop.

So what other reason is there to play Dead or Alive 4, other than for the challenging difficulty level? Ladies. Yes, it’s one of those games, but this should be expected with Team Ninja. They’re under the impression, somehow, that breasts are created from helium and gelatin, and that they shake more often than Ozzy Osbourne’s hands.

Team Ninja is more Team Pervert than anything else when it comes to art direction. But they’re Team Realism and Team Beauty, as well. Dead or Alive 4‘s beauty was absolutely necessary at the time of this game’s released—Microsoft had just launched the Xbox 360, and this was and still is a solid fighting game for the hardcore gamers, whom the Xbox 360 was directed toward at the time.

This is the main gripe I have with Tekken 6, also—the arcade mode, in particular, was just Dark Resurrection‘s arcade mode. With fighting games, the novelty often wears off after the second game, if it even lasts that long. Nintendo had to put a lot of work into Super Smash Bros. Brawl to make it passable—and although they included the same old arcade mode, they also included a full single-player and co-operative story mode, with a half-decent narrative.

Dead or Alive needs a proper, well-formed story mode—not these dumb character-specific story modes, and not something half-assed and sluggish like Tekken 6‘s.

If there is a fifth Dead or Alive, Team Ninja will have to do something drastic, but something that works. They needn’t really touch the graphics, as lifting them from this title and slightly improving them would be more than enough—but they need to work on the game itself, flesh it out a little more and offer us something else than the same roster of characters, and the same gameplay modes. 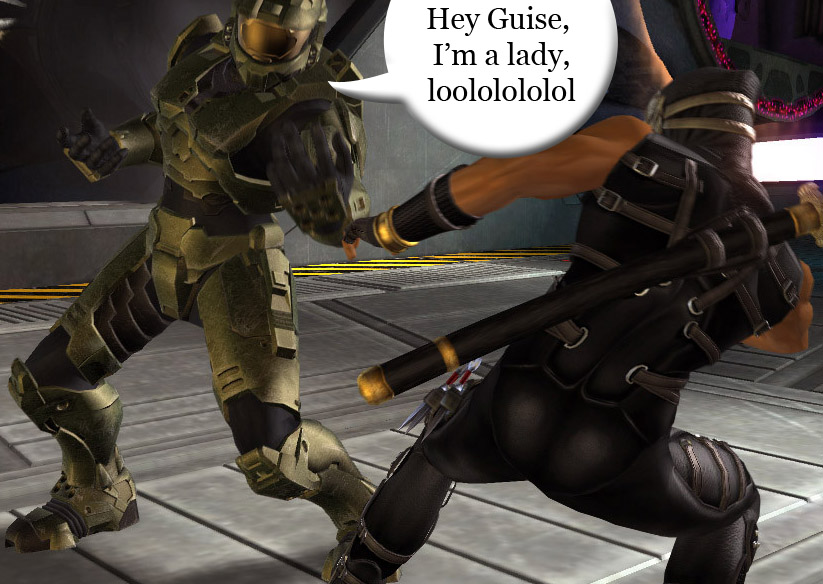 Dead or Alive 4, given the time it was released, is a decent game. But it’s only just decent, like being two or three above par in a game of golf because the ball ended up in a bunker somewhere along the way. Team Ninja needs to spend less development time with their hands down their pants, and more of it on the game itself. This is by no means a bad fighting game; but by all means, it doesn’t offer any substantial replay value other than online play.

And I don’t play games online, because too much of this happens.

Apart from being able to unlock Master Chief a unnamed female Spartan from Halo, there’s nothing really notable about this game. Take it or leave it, as there are much finer fighting games out there now. It’s a question of price, enjoyment and satisfaction—the bargain bin is perhaps a welcome home for this edition of Tecmo’s long-running fighting series.

If you were there, then this one's for you! You can show all your friends that you were actually famous on the Internet for a while.