Hey, a new season of baseball has started, and that means that the Orioles are doing pretty crappy. Baseball is pretty boring, though. There are little-to-no robots or weapons. This is where Base Wars comes in.

The story is that some time in the 24th century (although I bet this comes true sooner in real life), baseball team owners have grown tired of steroid-enthused, overpaid lumps of poop and have replaced all human players with robots. I guess in the future, robots are as cheap as a pair of socks. You may be thinking of that Futurama episode where they go to a robot “Blurnsball” game, but this title actually stays true to just about every rule in baseball, except that the players don’t all have legs. 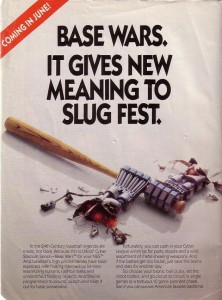 The game boots up and you see it’s published by Ultra. Here’s a little trivia about Ultra: Ultra is actually a subsidiary of Konami, which was formed so that Konami could override Nintendo’s limit of five published games per third party, increasing Konami’s limit to 10. Oh, and when you hit “Start,” you hear a digitized voice say “Yeah!”, which is pretty cool (but not as cool as Skate or Die 2, also produced by Ultra). He doesn’t sound robotic, unless robots in the 24th century sound very human. (Considering Mega Man is from 199x, this is pretty feasible).

In Base Wars, you can play exhibition or season baseball with your choice of team. It plays like regular baseball, but there are no force outs (except on tag-backs when making a catch). When a runner is tagged, you start a Street Fighter-style fight where the robots duke it out. Whoever wins, the umpire rules in their favor. But, the runner’s health bar is penalized based on how close it was to the plate when tagged. Theoretically, if you’re damn good, you can just run the bases if you don’t get hit in these fights, but that’s basically impossible. If you cause enough damage to a robot (either through battle or by hitting it with a pitch), the robot will actually explode. Either the balls are being pitched above the sound barrier, or the balls are made out of diamonds. The bots are metal, for God’s sake. Whatever the physics, if three of your robots explode, you forfeit.

There are four different types of robots, and each has a special ability in-battle. Their moves can be charged up in-battle by sacrificing some HP.

1) Cyborgs: These guys aren’t any more organic than the other robots, so they’re not really cyborgs at all. They have feet. Their specialty is jump kicking because they’re the only ones that have feet.

2) Flybot (aka Floater): Hey Jimmy, we got a floater here. Like Princess Toadstool in Mario 2, these things can really fly. In battle, you can hover even higher and come down and pancake your opponents. You can do this very fast, almost as fast as the motorcycle can flip around, like some kid on speed.

3) Mcycle (aka Motorcycle/Unicycle): These guys are vicious fighters who can bicycle-kick their opponents into a pulp. The problem is that they suck at fielding because they scuttle all over the place when trying to stop, like Luigi in Mario 2. These guys have pretty low HP.

4) Tank: These are all around pretty sweet. Their specialty is a shoulder-charge move. They shout “hey” for some reason when doing this. They have high HP, but they’re slow, so they’re not great fielders.

There are also some sweet RPG elements to Base Wars. I mentioned before that the bots each have HP, which is based on their class. When you’re playing season mode, you earn money after each game (more if you win). This can be used to buy all sorts of nice upgrades for your bots in-between matches. The shopkeeper is the floating head of Captain Jean-Luc Picard, so that’s pretty sweet.

1) Weapon: Boomsticks, and other assorted items to use on the diamond.
2) Catch: Glove upgrades.
3) Shoot: Pitching upgrades that allow for slower and faster pitches. Pitching is crazy in this game. You can move the ball all around in crazy directions, even off the screen. My brother would piss me off doing this all the time when we played.
4) Unit: Hey there, buddy; I like the size of your “unit.” What a stupid name. These apparently increase your running speed. When you buy them for your bots, you see them get installed into their brains. WTF?
5) Engine: See, now this sounds like it would have something to do with your speed. Nope, it increases your HP regeneration, which is apparently Hit Points, not Horse Power. (Who cares how many horses it takes to do something, anyway?)
6) Shoulder: I thought this was something specifically to upgrade Tank’s shoulder-charge. Nope, this increases your batting ability. The one that costs 20K is nuts.

With all these upgrades and weapons and stuff, it’d be nice if you could look at your roster while in the game. There’s some info when the player is at bat, like their equipped weapon, but that’s it. Still, it’s one of the few baseball games where you actually enjoy the stat management (upgrading and repairing your bots, etc). It’d be nice if there was some practice battle mode, because the CPU is relentless and will beat your ass. But if you’re like me, you’ll just do a Man vs. Man game and play as both teams.

This game is pretty fun all around, even if you’re not a big baseball fan. It doesn’t take anything away from baseball, and you can actually beat the shit out of your opponents. Why don’t they make cool sports games like this anymore? At any rate, I suggest you check this title out. It’s really great if you’re looking for something different. The graphics and sound are really great, too. This is as close as you’ll get to Street Fighter II on the NES; plus, there are robots. It definitely has that Konami feel to it, and it sounds like TMNT2 in some parts.

Did I mention there are robots?