Welcome, one and all, back to the thrill-packed action-ride that is Digital Championship Wrestling: the professional wrestling promotion that pits videogame characters against videogame characters to prove, once and for all, who could beat up whom. I am, as always, your host, Paul Franzen, and with me on this journey through bits, blood, and beatings is the man you all know as “Captain” Eric Regan.

Now, some of you may already be familiar with Digital Championship Wrestling. Or, at least, you may think you’re already familiar with it. You may remember DCW from the old-school ‘Cola days, back when it was filled with words. That was then, this is now, and those words are no more. 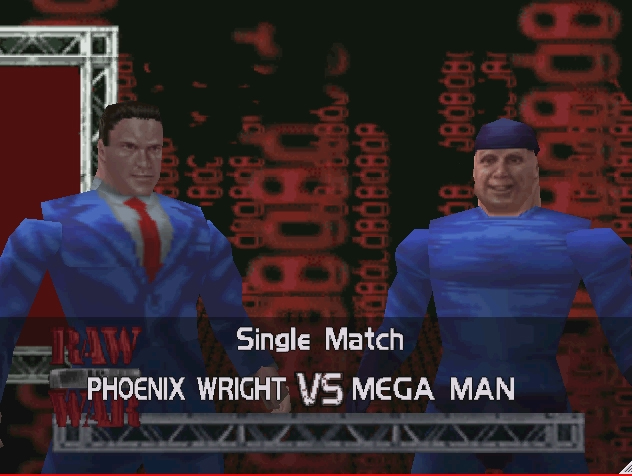 I’d like to present to you the all-new DCW, in its brand-new video format! On this eve, we’ll be watching the Ace Attorney Phoenix Wright take on the Blue Bomber Mega Man, and we’ll be watching it live from the James Pond Memorial Colosseum, courtesy of WWF No Mercy for the Nintendo 64.

Who will win this battle for the ages? Has Phoenix Wright shouted his last objection, or will he manage to prove, once and for all, that lawyers are actually way cooler than robots? Will Mega Man need assistance from Mega Girl, or Rush, or any of the other characters I only know from watching Michael Gray’s videos on YouTube? Are DCW’s renderings of Phoenix and Mega really that hideously ugly? You’ll have to watch the video to find out. (Except for that last one. That’s a definite “yes.”)

Hello all! So as some of you may have heard, I and Evangeline Rich of "Gamer Girlfriend" have tied the knot. The new Ms. Ridgaway has already posted a very lovely recap of the wedding and her feelings