Welcome back to the GameCola Top 50 Videogames, etc., etc. Now that you’ve had time to absorb and digest #50-31 on last week’s list, it’s time to move on to #30-11. This week we’ve got shape-shifting vampires, aspiring buccaneers, and a diminutive space prince, just to name a few. So, take a look-see through Part Two of our top 50 and let us know in the comments what you think. 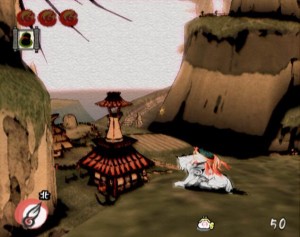 In Okami, you play as Amaterasu, a sun goddess in wolf form, who must save the world from eternal darkness. Yes, you play as a wolf who’s also a god. This game is awesome.

The world of Okami is based on classical Japanese mythology, and one of the most immediately impressive things about the game (after the wolf-god thing, of course) is that every aspect of the game’s design plays off of this classical Japanese theme. From the stunningly beautiful pseudo-brush-stroke graphics, to the background music, to the main gameplay mechanic—drawing on the screen with a magical paint brush to affect the environment—everything about this game fits together perfectly, and it’s all so cool. Playing as Amaterasu feels like living in (and helping to create) a richly detailed work of art.

On top of its obviously impressive and innovative design, however, Okami is raised to the level of “great game” through its story and gameplay. The world of Okami is filled with engaging (and often, funny) characters to talk to, inventive dungeons to complete, and challenging enemies to fight. The paintbrush mechanic is exceedingly fun and rewarding (and surprisingly easy to control with the PS2 controller once you get used to it), allowing Amaterasu to do everything from drawing the sun in the sky, to directing a stream of fire, to making trees bloom—and all of these are essential to the game’s progress. Okami is, overall, a great game because it has a solid story, engaging gameplay, astounding visuals, and a lot of heart. If it weren’t for Mega Man X, I may never have grown up to love heavy metal as much as I do. When I first popped the game into my SNES all those years ago, I was expecting something along the lines of the last Mega Man game I played (6, I think). What I got was a title screen that blew my mind with an awesome metal theme song and crisp new graphics. The rest of the game did not disappoint, with the graphics providing colorful and detailed worlds that were as much fun to look at as they were to play and the music providing an awesome soundtrack that kept my little heart pounding the entire time.

Mega Man X took the Mega Man series to the next level by incorporating new mechanics such as the wall-kick and dash, by including more exploration and collectibles, and by including more of a story within the game’s action. It’s not without its flaws—for instance, the game’s final boss is notoriously tedious to beat, and this is a task I’ve only ever managed once or twice in my life—but overall the game sports an incredible level of polish and refinement. The X franchise has declined in recent years, but there will always be a special place in my heart for the one that came first and the unending love of metal it imparted on my tiny being.

Whoever said that playing the real thing rather than these plink-a-dink toys was more fun…is still right. But for the sake of pick-up-and-play party fun, I’ve yet to encounter a game better than Rock Band 2. This game gets everything perfect: the look and feel of the rise of a rock band, the customization to make the band all your own, and a setlist that is absolutely killer—not to mention the other 1,000+ songs now available through DLC. There aren’t that many games launched in 2008 that still have the support and community that Harmonix has brought to RB2, and with a Green Day expansion and the next numbered title coming to us further down the line, the best rhythm game of all time is looking to become a hell of a lot better. Now…a little Porcupine Tree, Harmonix, if you will. 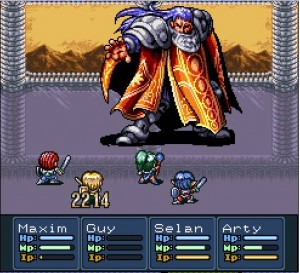 Hands down, the greatest thing to have ever happened. Lufia II achieved an impeccable level of balance of RPG elements, creating an immersive experience that doesn’t once trip you up with excessive grinding, poor level design, boring characters, or other issues that have long plagued the RPG genre. The dungeons are well-designed, filled with fun puzzles and ZERO random encounters. The visuals are great, and the music is simply astounding. There are fun minigames and diversions as well, such as raising capsule monsters to join you in battle, and winning bitchin’ new weapons from casinos. This game also contains one of the most compelling reimaginations of the classic “heroes save the world from evil” story ever. From an RPG standpoint, this game does everything right.

The Star Wars games have always been a curious anomaly: licensed games that are actually good. Not only have they frequently been good, but at times they’ve even been ground-breaking. I won’t pull a trick from the Nintendo Book of Marketing and claim that Jedi Knight is really a “first-person adventure”, but the immense and varied level design (that often places a surprising emphasis on platforming and adventure elements) leaves you with a sense that you are playing something more than just another FPS. This is not to say that Jedi Knight disappoints in terms of Stormtrooper-slaughtering mayhem. Why shoot enemies when you can choke them with the Force? Why choke them when you can shoot them while you’re choking them? Add in lightsaber duels, a Rancor fight (in the Mysteries of the Sith expansion), and the complete absence of midi-chlorians, pod racing, or Jar Jar Binks, and you’ve got one of the most solid and memorable Star Wars games ever.

What can I say? Katamari Damacy is just one of those games that excels at fun. Cute, funny, quirky (make that extremely quirky) but also very challenging, Katamari Damacy has something for both the casual and the serious gamer. OK, I don’t know how “serious” one can actually be while rolling a giant sticky katamari around the world and gathering up objects/people/buildings/etc., but you know what I mean. Katamari Damacy is on this list because it is crazily innovative (i.e. weird), addictive, and full of innocent fun (unless someone somehow wants to see the rolling-up-maidens level as not so innocent). Plus, the soundtrack is really great. The various sequels are good too, of course, but the original Katamari Damacy wins, overall, for its originality and just plain awesomeness. Before Square tried to sink its flagship by loading it full of pretty cutscenes and hoping we didn’t notice that the story and gameplay got shittier with every passing game, they used to actually try to make it one of the finest game franchises around. Never was this more clear than with the release of Final Fantasy VI.

It was ahead of its time in graphics, audio and gameplay, but FFVI‘s enthralling storyline is what truly made this game a classic. It served as one of the greatest kicks in the videogame industry’s collective ass that if the industry is going to progress, we’re going to need deeper plot lines than “save the princess” or “beat that bad guy ’cause he’s bad”. FFVI paved the way for the complex storytelling of today’s games like Ninjabread Man Mass Effect or Metal Gear Solid.

One of the greatest games ever…there’s just so much to do, and you can do it any way you want. The post-apocalyptic future world is your oyster. Jimmy is looking for his daddy. Maybe he can’t find him because he’s held captive by the Super Mutants, or maybe he can’t find him because you blew his head off. The choice is yours. Whether you’re a nice guy, a bad guy, or somewhere in between, there’s nearly endless possibilities. Part RPG, part shooter—this game has it all.

22. The Secret of Monkey Island

Part of what makes The Secret of Monkey Island grab us by our hearts and just squeeze, squeeze, squeeze is that, at its core, it’s a game about wishes and dreams. (I’m being serious now; this is me being serious.) Forget about the treasure hunting, the insult sword-fighting, and even the rubber-chicken-with-a-pulley-in-the-middle; when the game opens with that beautiful star-lit night sky, and the hero introduces himself by saying “My name’s Guybrush Threepwood, and I want to be a pirate!”, we’re hooked. From that point on, the game might be mostly silly jokes about dairy farmers and leather jackets, but it starts with a tone of hope and ambition that sticks with us throughout all the pointing and clicking.

So what’s the game actually about? It’s the classic story of a young dreamer and his quest to become a grog-swilling, gut-stabbing, wench-wooing pirate—a quest that you get to help him with by picking up objects, combining objects, using objects, giving objects to others, and fooling people into believing that there is a three-headed monkey standing directly behind them. It wasn’t the first point-and-click adventure game, but its sense of humor, charm, music, lovable main character, story of hope, and total lack of any way for you to die without trying made it by far the best of its time, and, arguably, still one of the best today.

Revitalizing the role-playing genre through more than just the transition from 2D to 3D, Final Fantasy VII became the benchmark for all other RPGs. This three-disc behemoth has everything that was possible at the time—a gripping story, fantastic characters, a massive soundtrack, cutting-edge graphics—and they still had room for full-motion video!

The story has a very strong eco-friendly theme, and it takes you by the hand all the way through, chock full of surprises and suspense and other awesome words beginning with “s”. It is considered the best game in the series by many, including myself.

Move along to the next page…

I think we can all agree that the best kind of sports is a fake one, right?  After all, who wants to bat a ball around in a crowded stadium when you can instead fly around on a broomstick trying to b