The Mario franchise probably wouldn’t have the appeal it has today if it was just about an overweight Italian guy who liked to fondle mushrooms. (Not in the straight community, anyway.) Sonic the Hedgehog wouldn’t have caught on if it were just about a rodent that enjoys collecting bangles, and Halo would never have caught on if it were just about a space marine running around aimlessly with the world’s shittiest flashlight. A Kingdom for Keflings ignores the lessons learned above and decides that Warcraft would be a good time if you just focused on gathering resources and putting up buildings and none of that pesky battling or conflict. 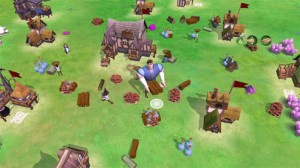 In KFK, you play as a giant among a Lilliputian race of shiftless lazyasses called Keflings. You help (read: do 99% of the work) build the Keflings’ city from the ground up, developing it from a small shanty town to an expansive kingdom. You cut trees, shear sheep, collect rocks, and mine gemstones, building up the city with only a few Keflings in the beginning to help you.

You can always build homes for more Keflings, but Keflings will only move in if there’s love in their home, represented by a large heart. A lot of times more “love” and other items that improve your ability to build the city can be unlocked by doing chores for the town’s mayor—which seems incredibly stupid to me. If I were the mayor of a worthless little town that I was desperately trying to expand, and a giant came along and said “Hey guys, how can I help?”, I probably wouldn’t withhold reinforcements and the tools to do the job. I’d call in all available citizens, dust off the crate in the storage area marked “stuff that helps giants build shit quicker” and hand the contents over to him, instead of playing some kind of self-sabotaging game of keepaway with him.

Sadly, it’s not just the Kefling Mayor that sabotages the city—it’s also all the Kefling inhabitants. First, they’re too damn picky, only moving into a house when there’s “love” in it. Listen, Keflings: Me, my wife, and my kid all live in a house where I had to spend a good portion of our first week patching up holes in the wall that were made by a guy who is now in jail for putting those holes there with his wife’s head. We do all right; suck it up. Also, I thought I was being sly with the game, leaving the room for a bit and letting the Keflings gather resources for me to use when I returned. Turns out that if I’m gone for more than a few seconds, all the Keflings just sit down and wait for me to start working again. FINE. IT’S YOUR GODDAMN VILLAGE, YOU LAZY PRICKS! BE HOMELESS! Of course, this is just nitpicking. It’s all done to create a vehicle that drives the gameplay, but it’s still annoying. 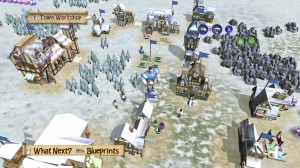 Surprisingly enough, despite how repetitive the game may seem, it isn’t entirely the boring snoozefest I thought it would be.   Building a new place may require some resource harvesting on your part, but if you utilize your Keflings right, it’s rare that you find yourself doing way more than you were willing to do. Also, a large array of different buildings with different purposes at your disposal keeps you going despite the game’s somewhat monotonous nature. But, even so, it’s certainly not a masterpiece of gaming. It may have just enough to keep you going, but eventually the buildings start blending into each other. The fun of building a new kind of building fades after a while, and there’s not an incredible amount that keeps you coming back for more once you tire of resource gathering and depositing. Of course, being a jerk always helps, and you can just kick a Kefling around for your amusement while the rest of the Keflings gather stuff for you.

Now you’re probably thinking to yourself “What could be better than utilizing a giant to tediously build a small village piece by piece for a bunch of minuscule layabouts?” Well, buddy, how about utilizing FOUR GIANTS to build that village? Yes, Xbox Live online multiplayer is available, in which you can visit other peoples’ cities and help build them. I cruised around about 15 online games and only came across two people who actually said anything. One was an Achievement junkie demanding that I build a banner tower so that he could get an Achievement for being in a city with a lot of them, and another was a kid who said, two octaves higher than my best falsetto, “LALALALALA  AAHHHHHHHHHH BEEPYDOOPYDOOPY LLLLAAAAAHHHHH!” I love playing online with kids. Love it. Where’s the fucking Excedrin?

One thing that may or may not extend the shelf life of this game is its Xbox Avatar integration. Instead of watching some random giant do small-scale carpentry, you can finally live your dreams and watch yourself do it. Granted, if you didn’t care for the resource-gathering nature of the game, then this won’t really be a deal-breaker for anybody who doesn’t have clinical narcissism. 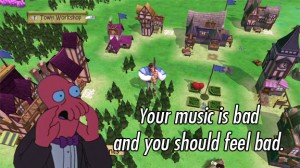 Though, probably the thing I disliked most about this game is that the music is so bad that, after about three years of owning my Xbox 360, this was first game that convinced me that it was absolutely imperative that I set up media streaming so that I could drown out this crap. Granted I may just hate this type of music, and you might even enjoy it if you’re into jam bands and such. But then you might be too busy stringing together a puka shell necklace and making produce into bongs to have even played this game in the first place.

Overall, it’s surprisingly better than one might think a game where you do nothing but collect resources would be, but it’s still little more than one of those timesink type games where you play it for the first half-hour, tell yourself “Meh, it’s nothing special,” and then realize five hours have already passed. Might not be worth the full 800 MS points pricetag ($10) it goes for, but it’s gone on sale before for 400 points, and I’d say that’s worth it if you see it drop again.

I remember the first time I played Scene It?: Lights, Camera, Action. I didn't think it was going to be any good, but I gave it a shot, anyway. It stars me, after all, and he's definitely one of my fa