I mentioned this on the GameCola Podcast recently, but what’s up with Super Mario Galaxy 2 and its insistence that Mario and Peach are a romantic couple?  I mean, look at the dialogue options you have when someone talks about Peach being Mario’s girlfriend: 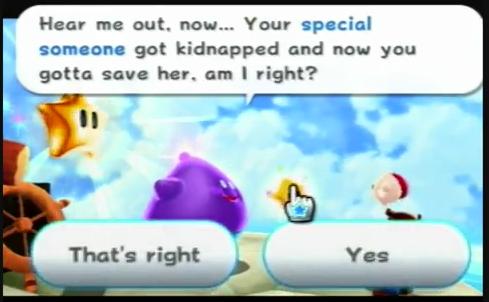 I just can’t help but think that there should have been more emphasis put on the fact that Mario and Peach are now a couple.  After all, this is sort of a BIG DEAL.  The world’s best-known videogame character has been given an official girlfriend?  That news should rock the videogame world, or at least make some sort of impact somewhere.

But…Super Mario Galaxy 2 just sort of ignores this information.  Instead of being a major plot point, it just puts forth “Mario and Peach are a couple” as part of the backstory, like it’s no big deal, like it’s something everybody already knows.  Compare this to 2007’s Super Paper Mario, which had a “Peach marries Bowser” plotline.  That game had about three pages of material on Peach’s romantic life; Super Mario Galaxy 2, in which she actually has a boyfriend, gives us three sentences at most, all of which comes from Lubba (the purple guy in the picture) because Mario can’t talk.

So I guess my question is, “Am I wrong?  Is this not a big deal?  Does the game not have to go into any detail about the fact that Mario and Peach or dating?  Or am I totally reading things into this game, and Mario and Peach are just friends, like they’ve always been?”

Last month we talked about cheapness in online multiplayer games in a more general way. This time, I’m going to make it personal.