This game has a lot of bugs.

There’s been a sim game for just about everything. Cities, towns, towers, healthcare, helicopters, and even ANTS! It seems that in the late 90s Maxis was poised to throw the switch on The Matrix and have everyone’s lives be simulated by a shroud of unrealistic scenarios, cryptic menu icons, and open-ended gameplay. Hell, SimCity 3000 came out before the year 2000. That’s kinda jumping the gun. I remember fondly “beating” SimCity 2000 and having all my Launch Arcologies blast off to distant worlds (most were likely shot down by the Soviet Union of the future), leaving behind a bunch of rubble. What, you want me to rebuild and spend countless hours on this game again? No thanks.

Enter SimAnt. While it is primarily a sim game, it does actually have an end-game goal. And that goal is KILL ALL RED ANTS. I think SimAnt was the spawn of the Kosovo incident.

As the yellow ant, you must lead the black ants to ethnically cleanse the red ants from the face of the Earth yard. In the Full Game mode, there are several levels, each representing a square area of a large grid comprising the house and yard. If you beat the red ants in one level, they manage to fly away even if you kill them all, and then your ants must slowly take over the yard while the red ants advance on your territory.

You can only oversee one level at a time, and the CPU does the rest. Unfortunately, the game is pretty boring on levels that aren’t occupied by Red. What’s REALLY annoying is that whenever you switch levels, your ant colony has ZERO food, as if your not being there has left them for dead. So as you try to gather food, you’re going to have some ants starve to death. It’s easier to overtake the red ants when you’re in the level. You can rally troops to follow you and crush the red queen. When the queen is dead, you cut off the supply line of new ants in the colony. In fact, in the Scenario mode, you win just by killing the queen. 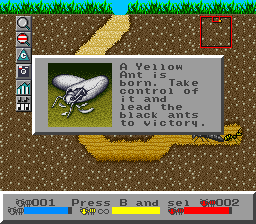 Yellow Ant? He’s not yellow. He’s not even black. He’s white. Oh right, Michael Jackson said it doesn’t matter if you’re black or white. Or maybe that was Jesse Jackson.

You do have some mayor-like management in this game, but rather than building strip clubs and fire departments, you get to manage quests for food, as well as modify what the ant larvae hatch into. You can also control what the worker ants spend their time doing. (Apparently a real-life queen ant can do this.) The game has a nice little ant encyclopedia that shares some info about ants and their common ancestors. In the pre-Wikipedia days, this was a great place for ant-related information.

The game is pretty easy and boring. The Full Game mode does have a save feature, but it takes about five minutes to save. FIVE MINUTES! Can you imagine devoting that much time to saving? How much information could there possibly be? Think about how long it takes to save in SimCity or SimCity 2000 for SNES. And you’re telling me some friggin’ ants take FIVE MINUTES? Horrendous. Unacceptable! Link to the Past takes like two seconds to save.

Ugh, I started writing this review because I have an ant problem in my house, and I thought this would show them my respect for ants. But you know what, now I feel sorry for the red ants and I want to kill the black ones. This game sucked then and it sucks now. Yeah, it has an end-game, and it’s kinda innovative— innovatively boring! Take that and shove it up your ant hole, Wil Wheaton! 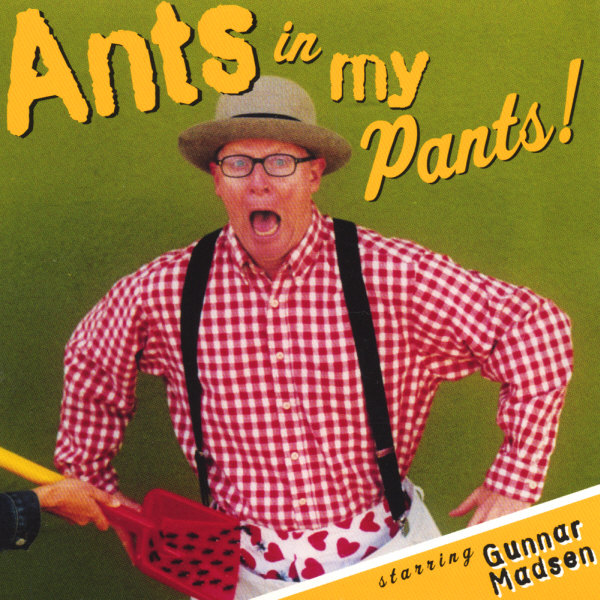 If you want a decent ant game, go with this. This is GameCola Editor-in-Chief Paul Franzen at his birthday party in the year 2047.

So one thing I've discovered during the past month is that it reeeeally helps to have a plan for what you're doing.  It's a big motivator, let me tell you.  For example, since the last installment