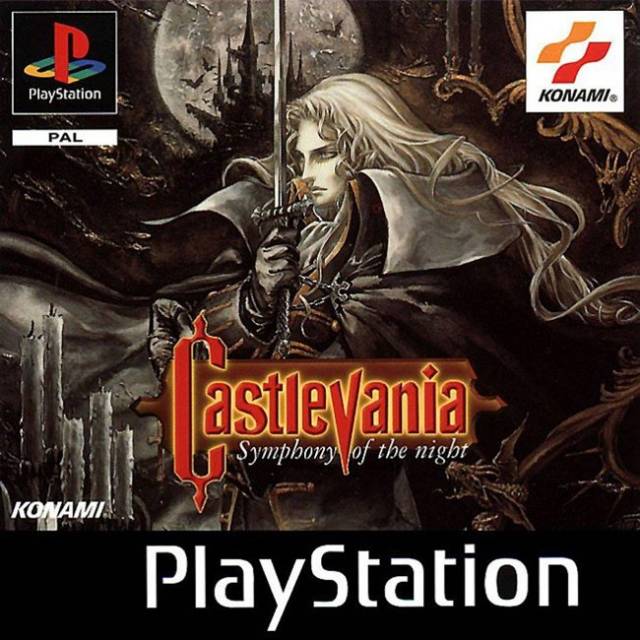 Ha…sarcasm: For what profit is it to a man, if he were to gain the whole world and lose his own heart? – Matthew 16:26, I believe.

Castlevania. A name synonymous with some of the greatest gothic-based action-adventure games. A rather unsubtle champloo of Greek mythos, Lovecraftian horror and traditional horror stories, Castlevania isn’t just about Bram Stoker’s Vlad the Impaler-inspired Count Dracula rising from the dead. The games tackle almost every otherworldlian being, from Mermen to whatever the hell this is supposed to be.

With each new game the premise tends to get more far-fetched, as Dracula finds yet another way to rise from the dead. He won’t stay down, and neither will his magnificent castle, which gets re-constructed for every game. Most recently, the series has been attempting new things to either captivate a new audience, or maybe just piss off the fans it already has. Harmony of Despair is the latest game in the series, and from the looks of the trailer, it is going to be a co-operative Castlevania. Just how is THAT going to work? 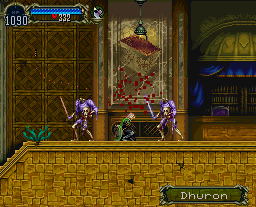 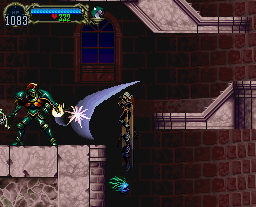 My favourite Castlevania? Not even a second passes before the following phrase rolls off my tongue: “that’s totally Symphony of the Night.” You’ve heard Castlevania mentioned more than once here on GameCola. I’ve mentioned it a good few times myself, in fact. So what makes this series so damn influential, especially Symphony? Well, gather round; I’ll tell you.

The original ‘vania games were more about death by bottomless pit than adventuring. The series was re-thought when Symphony of the Night hit the scene. Dropping the platforming for adventuring and the whip for a sword, Symphony ups the ante considerably. It changes almost all of the gameplay fundamentals, making it very clear to us that Konami wanted to break the mold with this game—and boy they did.

Symphony of the Night did it best, and still does it best. A game no younger than twelve years old still provides some of the most fun combat this side of The Jeremy Kyle Show. Levels have been switched for free-roaming, and one-hit kills have been accounted for by being made blockable or nullifiable through particular equipment set-ups. It is fast, frantic, and furious, an experience of terrible voice acting and clueless translation that results in some of the best adventuring I’ve ever had. Symphony is still as good now as it was all those years ago. Some games grow old and wither, whilst others grow old yet stay beautiful. Just how do Jackie Chan and Bruce Forsythe keep themselves fighting fit? The same way Symphony of the Night does—they just keep delivering the goods. 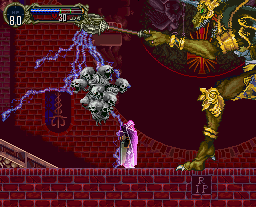 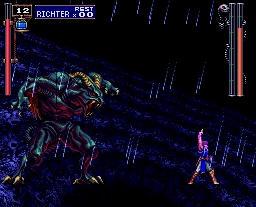 The graphics are crisp and sharp, just the way I like them. The overall presentation is well above par. This is a masterpiece that can sell for over $300-$400, sealed. Everything about Symphony is worth more than money or gold.

The back of the box says it best: “an adventure as legendary as its name.” The number of hours that this game packs is remarkable. It isn’t like Rock Band, where the hours it packs require playing the same on-disc songs over 9,000 times—the hours packed by Symphony are hours upon hours of adventure and exploration that cannot be matched.

There are underground ravines, woodlands, chapels, steeples, cathedrals, and confessionals laced with such fine gothic architecture that I imagine John Ruskin would explode like a firework of pure joy if he were to gaze upon their splendor. Beautiful three-dimensional effects that aren’t forced like in other games from the era make things look even better, with a particular chapel room that is so incredibly stunning that it made my eyes pop out on stalks. The sprites look like they have been painstakingly painted by a thousand burning nuns suspended from a cliff of maiden beauty. The layered backgrounds and effects genuinely look the part more than in any other game, ever made, ever since. The influence cast upon the Game Boy Advance and Nintendo DS Castlevanias is obvious.

Beauty aside, Symphony is an actual symphony. For the ears. If your ears could cry tears of happiness, they would weep for a hundred years. A feast for the cochlea that stimulates the mind and soul. Chilling (and at many times haunting), the soundtrack to Symphony of the Night is not the synthetic blast of melody that the other Castlevania games are known for, but instead a far more layered and crafted score that perfectly aligns with the gameplay at all times. 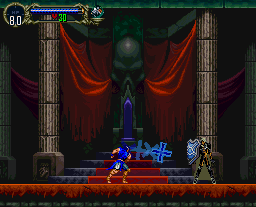 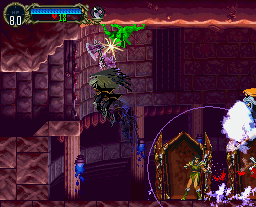 And the gameplay delivers equal measures of combat, role-playing, and platforming. Gone are the side-scrolling levels, and in their place lies a multi-threaded adventure game that will eat your life away. For most people, this will be a platformer with an RPG twist. For the connoisseur, this title is the Hokkaido-trademarked manatee- and caviar-flavoured kettle chips that continue to expand their seasoning. If you have a taste for bona fide adventuring, then one lick of Symphony will give you the urge to gorge and gorge until there is nothing left.

The game opens with a short re-enactment of the final stage from the prior game, Chi no Rondo. Richter Belmont makes his way up to Dracula’s keep, to finish him off once and for all. Dracula and Richter have a little conversation about the worth of man and vampires (with a nice quip at organised religion), then start fighting. Richter puts Dracula in the ground (the same way his family has done for all these generations), and leaves Dracula’s castle, Castlevania, in ruins.

The man responsible for bringing Dracula back from the dead, the dark priest Shaft, goes into hiding. Before the dust has settled on the ruins, Shaft attempts once again to revive Dracula and cause the death and/or destruction of mankind. Also, Richter Belmont has gone missing, and it is up to his brother Luigi to travel the world finding clues to his whereabouts.

No, wait; that’s Mario is Missing.

With Richter out of the picture, it looks like Shaft will finally succeed in his goal of causing mankind’s eternal damnation (or at least, that is what I take “the world must be cleansed in the forge of chaos” to mean). At this point, hot-shot half-vampire awesome-guy Alucard awakes. He is the bastard son of Count Vlad Tepes Dracula, in case the antidromal name wasn’t obvious to you. He’s pissed at his father for hating humankind and is ready to lay the smackdown on his daddy without a moment of respite.

Alucard knows that he cannot rest until Dracula is silenced and his mother’s spirit can finally be at peace, so he heads over to Dracula’s newly reconstructed castle to find his father, and whoever is controlling him, so he can bring them all to justice. The story doesn’t even matter when you get an hour into the gameplay—it’s just SO good that your mind wanders off and imagines what it would be like if Alucard from Hellsing was the same as Alucard in this game. Hmmm…

I’ve said my piece. The numbers add up. For 800 Microsoft Points, take away a challenging Live Arcade title that accurately delivers the same gameplay we know and love. A straightforward 200 gamerpoints, too? Bitchin’. It’ll take ages to find everything, and to get over 195% of the game map uncovered will take a very long time. That “Seeker” Achievement will make you angry, but rightfully so! YOU DARE CHALLENGE DRACULA’S CASTLE AND IMAGINE IT TO BE EASY? YOU SHOULD BE ASHAMED OF YOURSELF!

What are you waiting for? GET IT. If you’re not an Xbox 360 gamer (and in all fairness, if you’re therefore not a gamer), I reccomend snapping up Symphony of the Night on the PlayStation Network. Or, you could play the enhanced version unlockable in Dracula X Chronicles for the PSP. Just don’t expect to find the Saturn or PlayStation versions as easily, or to even be able to play them without modding your console.

Remember kids: if you take shortcuts, dragons will steal your fiancee.