“It all started out as a normal morning…”

On the day before her 18th birthday, a young woman named Lyra wakes up to find herself all alone. Surrounded by the empty buildings in what was formerly the merrily bustling town of Wish, Lyra searches for clues to the fate of the vanished villagers. Fortunately for her, she finds help quickly. It turns out that her very considerate (and magical!) grandfather has left her a series of notes explaining that she has been trapped in a parallel “pocket” universe and must find a way to escape. With her grandfather’s fine penmanship to guide her, Lyra proceeds to embark on a quest to find her way home. 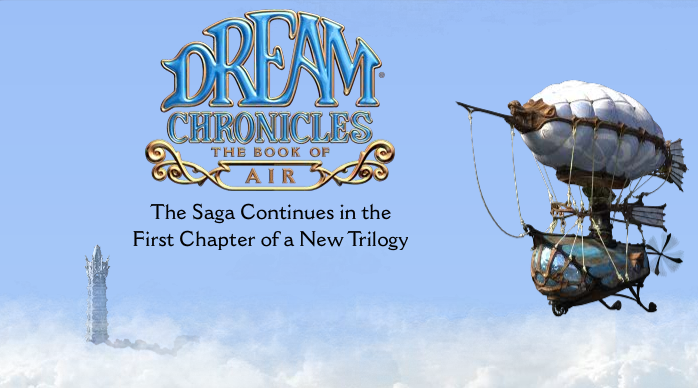 How was the Gaming Experience?

In general, the experience of playing Dream Chronicles: The Book of Air was a fun one, and I noticed several improvements over previous games in the series that made it feel new and fresh. The voice acting in particular was a nice innovation. While the general concept of voice acting in videogames is hardly novel, the dialogue in all the previous Dream Chronicles games was purely text-based, so this was a nice change of pace (although I did find myself missing some of the eerie music that had been so crucial in establishing mood and moving the story along in the previous games).

Another plus of the game was its improved graphics. The art design of Dream Chronicles: The Chosen Child (the previous installment in the series) was lovely; but in this game, the designers built upon the art style so that the graphics were considerably more sophisticated and less grainy. Some of the animation sequences were really quite beautiful, which is something I always enjoy seeing in videogames.

The most significant improvements to the game, though, lay in the puzzles themselves. Whereas the previous games focused largely on hunt-and-seek games (VERY rough on the eyes), The Book of Air contained more variety, and included puzzles that relied more heavily on logic, spatial reasoning, and creativity. In addition, the dream crystals I collected throughout the game actually served a more useful function than in the previous games, and hunting the crystals allowed me to unlock powers that could then be used to solve new puzzles. The game also contained a challenge mode, which gave the player the option of solving more difficult versions of the puzzles. Considering that I love puzzle games, this was a feature that I particularly appreciated. I seriously doubt I would have enjoyed the game as much if it had been too easy!

Well, yeah. Despite its positive attributes, the game was definitely not without its flaws. The biggest drawback was the development of the story itself. Unfortunately, this happens to be the same problem I have had with all of the previous Dream Chronicles games, so I don’t have much hope that it will improve in the future. I did appreciate that they established a narrative distinction between this game and the previous ones (The Book of Air is the first in a new trilogy that takes place 10 years after the events of The Chosen Child). The game also saw the arrival of a new protagonist: Lyra, the half-mortal and half-fairy daughter of Faye. This was a smart move on the part of the developers, as it introduced freshness into the series, and also allowed the developers to play around with some new mechanics that would not have been possible with Lyra’s non-magical human mother as the central character.

Unfortunately, considerably less effort was made to develop Lyra as a character, which was a bit of a letdown. Like her mother, Lyra has no real flaws or virtues, so the result is a protagonist who doesn’t inspire much interest. In addition, the story arc of The Book of Air was an underdeveloped, albeit intriguing, one. As in the previous games, the action began with the inexplicable actions of a non-identifiable being who casts a spell for reasons unknown and thrusts the heroine into a set of circumstances for which she is wholly unprepared, thus beginning her journey into the unknown. (And yes, it really is that nebulous in the game.) Although the story did develop from there, the game never really answered the biggest questions it posed: namely, Who was doing this, and Why? There were certainly no answers to be found in the less-than-satisfying conclusion, although it was less disappointing than the end of The Chosen Child, probably because I was expecting the letdown this time around. As per the formula established by the previous games, The Book of Air ends on a cliffhanger, with a plot twist that prepares players for the next game in the series. It was hard to be impressed by this, however, since I am STILL WAITING for them to resolve the cliffhanger from the last game. I assume they’ll get to that particular plot point in the next game (HINT HINT), but until then, I guess I’ll just have to wonder.

Dream Chronicles: The Book of Air is an enjoyable game with some fun mechanics, and I’d happily recommend it for anyone looking to kill a few hours. As long as you don’t expect too much out of the story or characters, you should be fine.