A few weeks ago, there I am sat on an annoyingly long train journey (about 2.5 hours) because my car was broken. Fortunately, I had an eBook reader with me, and I was finishing up a novel by Cory Doctorow when it dawned on me that I was finished my book, and had over an hour left of my journey. Luckily, with eBooks and mobile Internet I could just download a new one on my phone and transfer it across to the book reader. Yay modern technology!

The book I’d just finished was very good, so I decided to try another one from the same author. Fortunately for me, Doctorow makes all his books (legally!) available as free eBook downloads on his website. This time I chose “For the Win.”

I highly recommend that anyone with an interest in economics, freedom, videogaming, MMOs and/or gold-farming give this a read. It’s set in what I think is the vaguely-near-future. Three of the world’s 20 largest economies are within MMOs run by Coca-Cola Games. Gold-farmers work across the globe in various games to turn their skills into real money so that they can feed themselves and their families. In some cases, these farmers are working in factories in China. Other players are employed by the game as “Mechanical Turks,” whose job it is to interact with the players as NPCs where pre-scripted content falls short. Yet more players are employed by independent organisations, whose motive may or may not be unknown, to work as bounty hunters, killing specific players within the game for real-world money.

Many of these people find that their working conditions are sub-standard, and that they are not being paid enough. What do most people do in that situation? Form a union. How do you form a union, made of workers from an industry that spans the globe, some in countries that do not recognise or allow unions, across language barriers and many times in cases where the employees are working within an organisation that technically falls outside the scope of the rules of the game (e.g. gold-farming)?

Using the Internet, and within the games of course.

At any hour of the day or night, millions of people around the globe are engrossed in multiplayer online games, questing and battling to win virtual “gold,” jewels, and precious artifacts. Meanwhile, others seek to exploit this vast shadow economy, running electronic sweatshops in the world’s poorest countries, where countless “gold farmers,” bound to their work by abusive contracts and physical threats, harvest virtual treasure for their employers to sell to First World gamers who are willing to spend real money to skip straight to higher-level gameplay.

Mala is a brilliant 15-year-old from rural India whose leadership skills in virtual combat have earned her the title of “General Robotwalla.” In Shenzen, the heart of China’s industrial boom, Matthew is defying his former bosses to build his own successful gold-farming team. Leonard, who calls himself Wei-Dong, lives in Southern California, but spends his nights fighting virtual battles alongside his buddies in Asia, a world away. All of these young people, and more, will become entangled with the mysterious young woman called Big Sister Nor, who will use her experience, her knowledge of history, and her connections with real-world organizers to build them into a movement that can challenge the status quo.

The ruthless forces arrayed against them are willing to use any means to protect their power—including blackmail, extortion, infiltration, violence, and even murder. To survive, Big Sister’s people must out-think the system. This will lead them to devise a plan to crash the economy of every virtual world at once—a Ponzi scheme combined with a brilliant hack that ends up being the biggest, funnest game of all.

The book tells the story from a variety of perspectives—the gold farmers, the players, the hired guns, factory workers—even from the perspective of employees of Cola-Cola Games. It provides interesting insight into how the future of these games may work, sprinkled with the occasional chapter of economic discussion.

Some of the games also sounded quite cool. I’m rather disappointed that they don’t actually exist—particularly the “Mushroom Kingdom” MMO by Nintendo. A Mario-based MMO with Mario-side-characters and Bowser-side-characters as players? I’d play that! C’mon Nintendo! 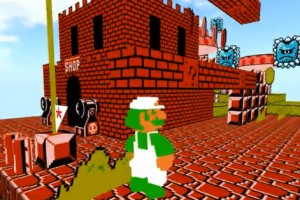 On a loosely-related note to a Mario-based MMO, I was looking
for an image to put here and found this one, which apparently
is a screen-cap from a Mario area of SecondLife. Dunno much
about it, as I haven’t checked it out yet, but it sounds cool. Here’s the link.

Furthermore, because of Doctorow’s rather unique views on copyright (which you’ll find a couple of paragraphs on at the beginning of his books), the books are available for free as eBooks on the website’s download page, in traditional dead-tree format or as audiobooks.

DNN: See that castle up there? We need to get to that castle. Just climb aboard this giant antelope butterfly.