Hector: Badge of Carnage is shaping up to be a fine series indeed. The first episode, We Negotiate With Terrorists, is a hilarious parody of traditional point-and-click adventure games such as The Secret of Monkey Island and Day of the Tentacle. Like the characters in these games, Hector isn’t afraid to goof around a little and make some generally witty jokes, whilst bumbling toward completing a set of curious goals. 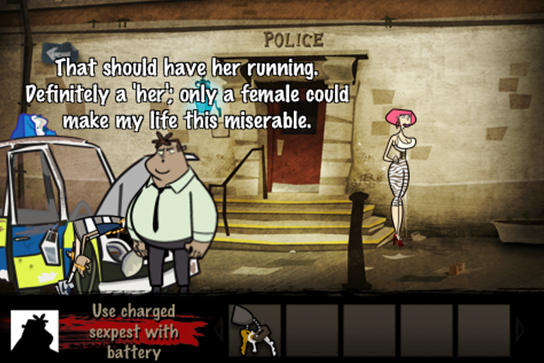 Although Hector’s credentials as a police negotiator are second to none, he was only chosen because everyone else had already been killed by a mad-man holed up in an old apartment. Hector, who has managed to lose his trousers and get himself locked inside a jail cell (which he occasionally uses as a bedroom and/or “shag pad”), finally makes his way to the scene of the crisis and decides to fulfill the psychopath’s requests in exchange for the freedom of the hostages.

You move Hector by dragging your stylus across the screen, left or right. Tap an object to look at it, and double tap to use it or pick it up. If Hector still just looks at the item, then you simply cannot interact with it.

This control scheme threw me off a little. The developers could have made it a little less confusing by, when you tap on an object, bringing up a small menu of actions that can be done to it (look, pick up, attempt to consume). I hope such a system is worked into the second episode, as it would mean less reliance on the official walkthrough because Hector refused to interact with a specific object unless I double-tapped it in a very small and barely noticeable area. I do very much respect that this is a staple of the genre, though—that things can never ever be simple in a point-and-click adventure.

The best example of where the game could benefit from a context menu is in the clock tower area, where Hector is required to look out of the window. A single tap is to “look at” the window, and a double tap is to “look out” the window. These actions are almost identical, but only one of them actually progresses the plot, and not knowing you need to perform it means you won’t make any progress on two of the three final “trials” you need to complete. 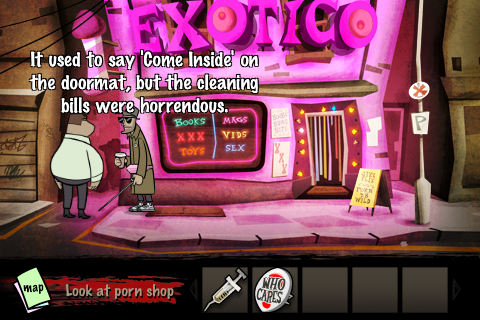 The controls are finicky, but once you get past what is effectively the tutorial, you get used to them. In the same way you get used to living with a crippling terminal illness, anyway. I imagine that a mouse-driven version of this game wouldn’t have these issues.

Enough hating upon Hector, though; the game is seriously one of the best portable adventure games I’ve ever played. Where all other games of this type on the iPhone right now are ports of PC titles, Hector is made from the ground up for the iPhone, and it looks great. And that’s the key thing—looking great.

The content of this game more than makes up for any small faults—from a graphical standpoint, as well as a spoken and written one. The script is outrageous and especially witty to me (having more than once found myself in conversation with the real-life equivalent of the absolutely stonking stupendously hilarious yobs in this game). The dialogue is amazing, and only a few lines aren’t voiced. A spelling mistake here and there, but nothing that takes away from the magic of We Negotiate With Terrorists. The voice acting is great, and the dialogue and script are truly outstanding. The animation is really good, and I’d expect no less from Straandlooper. A dirty game stuffed with adult humor from top to bottom. I cannot even wait for the next two episodes, to find out what happens after the gripping cliffhanger at the end of this one.

May Straandlooper continue to experiment and widen their animation and writing abilities into further videogames. An afternoon with We Negotiate With Terrorists is an absolute blast of an afternoon.

i noz a gawd gaem wen i playz won LOL

A few days ago, Microsoft released the "New Xbox Experience." This pretentiously-named new GUI for the 360 features a new layout, user-created games, connectivity with Netflix, and Miis. No, I'm sorry