Brian Basco is the biggest asshole in adventure gaming. He’s supposed to be the “hero” of Runaway: A Road Adventure. But would a hero:

These are all things that Brian Basco actually does. But he isn’t supposed to be a jerk. This isn’t Ceville, where the main character is a comical exaggeration of a tyrant who talks about chopping down rainforests purely for fun; this game is supposed to be about a regular guy getting caught up in fantastical circumstances and trying to save the woman he loves (/just met) from being bumped off by the Mafia. He’s meant to be the Tom Hanks good guy hero, out to solve the mystery and save the day, but instead he’s a total dick who’s mean to everyone and steals things from them.

You might as well be playing as a cast member from The Jersey Shore. 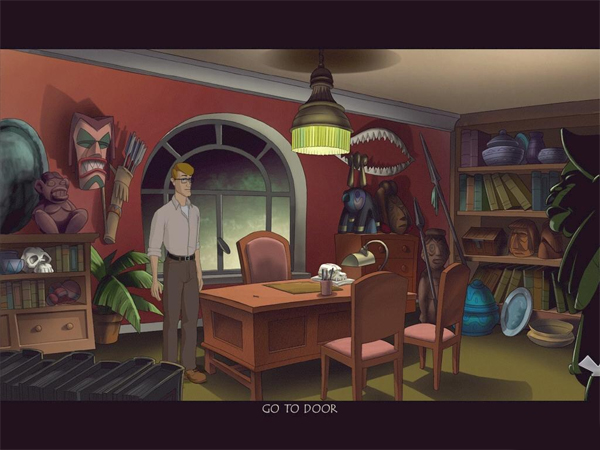 So the main character’s crap; what about the rest of the game? It doesn’t get much better.

I don’t understand. Runaway is an old-school point-and-click adventure game from a time when such things didn’t tend to exist. The game was hailed by both Adventure Gamers and Just Adventure—two reputable sites in the world of adventure game reviews—as though it were the second coming of Jesus H. Threepwood himself, but it’s not even the second coming of Zak McKracken. The only explanation I can think of is the game’s release date: it was released in 2003, when we genre fans were desperate for anything with a point-and-click interface, and I guess back then we were willing to give 9/10s to steaming piles of crap.

Beyond the completely amoral main character, I also didn’t get a lot of this game’s puzzles, and I’ve played literally every adventure game ever made. The answer, half the time, was “there’s some random item you didn’t see because it consists of a total of seven pixels, and is also part of the background.” There’s a lot of pixel-hunting—it’s almost like a hidden object game, to the point where I think maybe it’s supposed to be. The other half the time, the answer to a puzzle is “you have to do something stupid.”

For example: Did you know that, in order to recharge a mostly dead battery, you can freeze it? I didn’t, but apparently that’s true, because you have to make Brian break into a chem lab and dip his batteries into a vat of liquid nitrogen in order to recharge them…rather than, I don’t know, just drive down the block to Wawa and buy some new batteries. (He also briefly considers stealing hundreds of dollars from his friend in order to purchase a half-used battery from a swindling janitor.) Also, did you know that peanut butter is made by mixing peanuts with actual butter, and then melting it? FACT. Weird puzzles that don’t make any logical sense are kind of standard for an adventure game, but usually not to this degree. And anyway, this game was otherwise trying to maintain a tone of realism. While mixing roots with grog in order to make root beer might make sense in a game focused on voodoo, demons, zombies, curses, and magical sponges, stuff like that doesn’t work in a game set in the “real world.”

My favorite puzzle—and I swear, I’ll stop harping on them after this—involved this motorcycle you come across. When Brian examines it, he says something like—this is true—”Oh boy, a motorcycle! That reminds me of the one my Dad used to have! Sometimes for fun, I’d take my baseball bat and smash it.” (Remember: HE’S A GOOD GUY!!) Hours later, I was stuck (of course I was stuck), and a hint on UHS indicated that I needed something to use as a door handle for something else; it doesn’t really matter what. The point is that the answer was, of course, to beat this motorcycle to death with a crowbar—which Brian was willing to do not because he needed the object, but because that’s what he used to do when he was little, and he wanted to relive the experience.

That’s the kind of game this is. 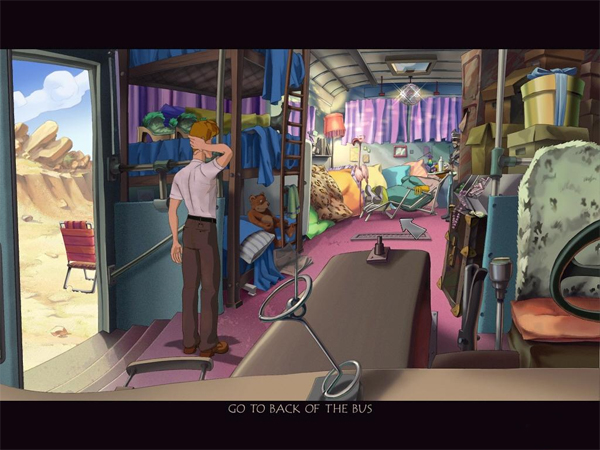 The translation isn’t that great. Even if you’ve never heard of the developers, you can tell the game wasn’t made in the U.S.A. That’s not me being jingoistic; that’s me pointing out that the localization shouldn’t be so awkward and unnatural-sounding that I can immediately tell no one who made this game actually speaks English. The voice acting didn’t help matters, either, since the actors didn’t appear to know the context of what they were saying.

I also had a lot of graphical hiccups when I was playing this game, though I say that with the caveat that I always have graphical hiccups no matter what computer game I’m playing. (Though, that said, I just bought my computer a few weeks ago, so I’d think it’d be able to run a game from 2003 without too much trouble.) Anyway, during almost every cutscene, the graphics would stutter and freeze during scene transitions or new animations. Also, weirdly, the cutscenes were notably lower res than the rest of the game; they looked way, way worse, which is kind of backwards. The in-game visuals are actually really nice—like a slightly more “modern” version of Curse of Monkey Island‘s style (though by “modern,” I just mean that they sometimes make the characters look a little 3D). They were a highlight for me, since I almost invariably prefer nice-looking 2D graphics over nice-looking 3D graphics, especially in my adventure games.

There are other weird technical issues, too, like the fact that every time you save, you need to start a new save file, or…actually, that’s all I have in my notes. Also, there’s The Song. (Which isn’t a technical issue, but stay with me on this.) The Song I’m referring to is the main theme of Runaway, a sort of Go-Go’s-style song where the lead singer just sings “runaway” over and over again. This song plays during the opening credits, and then later, you hear a jazzy techno remix of it when you’re dancing around with transvestites in the desert. (Don’t even ask.) Later, when your one true love falls into a hole and you immediately assume she’s dead, a slower, ballad version of the song plays, and Brian sits down, to indicate sadness. With any other song, ever, it might’ve been a touching moment, but seriously guys, just two seconds ago, we were happily bopping along with our new transvestite friends to this same exact song; it officially doesn’t count as a sad song! Especially since the one word in the entire song is the name of the damn game! 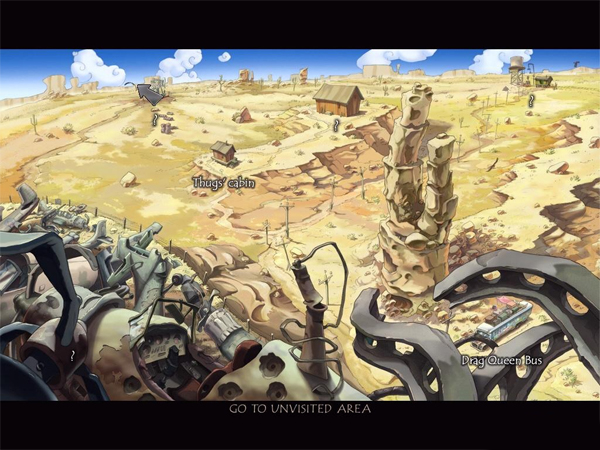 Apparently there are two more of these games available, and I was pretty excited about checking them out—they’re even on the DS, which means I wouldn’t have to deal with the problems inherent with me trying to ever get a computer game to work right. However, Metacritic tells me that Runaway’s sequels are actually worse than the original game, so why bother.

Look, it was almost an OK game. I can put up with the character if I need to, and I can chalk up the technical flaws to problems with my computer; but the underlying problem is that the game just isn’t very fun to play. Runaway’s instruction manual talks about how much the developers miss the era of the classic adventure game and are doing their absolute darndest to bring it back. That’s one of the reasons I was most excited about playing the game; I read the manual, and I thought awesome; they get it. Apparently I was giving them too much credit. Their character is a dick, and the answer to every puzzle is “pixel hunt, and then do something stupid.” THE END.

On the plus side, at least it has point-and-click controls.

Inspired by a historic debate on the hills of GameCola Capitol, where 22+ comments were left showing our seven readers that me and Jeddy just don't see eye to eye, I'm covering the first Mario trilog