The following was the original introduction to my ArcadeCraft review, but it ended up devolving into me just writing a melodramatic rant about stuff everybody already knows.

When Xbox Live Indie Games was first announced, it was unprecedented and amazing. We had been under the heel of EA, Activision, Ubisoft, and their ilk for far too long and, at long last, the power to get your game onto a big console was being taken out of the big publishers’ hands and being given to us, the amateurs, the hobbyists, the dreamers. We were going to show the world you don’t need millions of dollars to make a game great. You don’t need teams of hundreds of people. You don’t need slick, cutting edge graphics. You don’t need to follow the same hackneyed formulas used by countless games that came before you. You just need passion, creativity, and some elbow grease and your dreams can become a reality.

Xbox Live Indie Games was a revolution, and we were revolutionaries. It was both our armory and the flag we were fighting under. It showed that we, the indies, were the future, and even Microsoft saw that. Hell, even Steam didn’t let any old indie developer sell through them. We just had to go through Microsoft’s minimal, peer-vetting process and we were golden.

Then, XBLIG was opened for business and…well it was a bit slow, and there was nothing amazing, but it was launched. We knew we just had to wait for our first big hit.

Then, it came. Our first big success. Screw you, Call of Duty. Up yours, Battlefield. It’s our turn, now. Our new flagship just came into port. And that flagship was I MAED A GAM3 W1TH Z0MBIES 1N IT!!!1.

It was basically a light-hearted Berserk/Smash TV-type dual-stick top-down shooter in which you fought waves of zombies while listening to one self-referential song forever. It…uh…well, it sucked. But, hey, it was a successful indie game that wasn’t afraid to ridicule its own amateurishness right in the title. I don’t see EA doing that, right guys! Besides, we’ve got an unending wealth of talent under our belt; we’ll have other hits—we’ve got creativity on our side!

Time passed and the games on XBLIG rapidly adopted a disturbing amount of homogeneity. What was once an eclectic mix was becoming nothing but zombie games and self-referential games where the joke was that the designer wasn’t a professional and didn’t try.

Everybody was making soulless clones of MAED. It was disconcerting. This is the kind of behavior XBLIG was supposed to be avoiding. We’re better than that.

Xbox Live Indie Games is still our revolution, but perhaps it’s downgraded to our beret and Che Guevara T-shirt.

—Oh, wait, it’s a wholesale Minecraft ripoff right down to the HUD?

Even more truckloads of money are doled out for the sequel, CastleMiner Z. On the bright side, at least it wasn’t so soulless as to just shove zombies into the game. 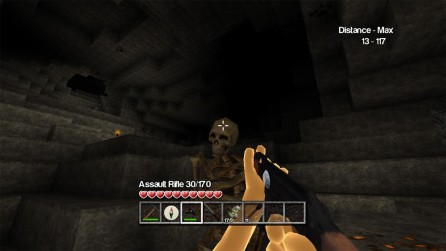 We could hold out hope for another big hit, but it’s just not coming.

It seems like every week the Indie Games Marketplace gets hidden deeper and deeper in the Xbox Live menus, with the Indie Game community loudly complaining every time. But, really, can you blame them? Should XBLIG be a point of pride? If the more well known games on your service were one that’s a blatant ripoff of a more popular game and a game where you try to hold in farts then, really, is that something to brag about?

Xbox Live Indie Games has stopped being a revolution and started being a punchline. We lost. It wasn’t big publishers that did us in—it was ourselves. When a briefcase full of money was shown to us we trampled over all that passion and creativity to get to it. We became everything we pretended to hate.

It is, with few exceptions, a landfill where creativity goes to die.

Steam(pre-greenlight) may have looked restrictive in comparison, but it’s better that a handful of deserving games be kept out than a flood of thousands of terrible games be let in, making all of the deserving games harder to find and undermining the integrity of the entire platform.

As much as it pains me to say it, Xbox Live Indie Game Marketplace’s greatest failure was its freedom. The quality of the games went nearly unchecked and an unnavigable flood of awfulness and plagiarism was let in. Boot it up right now and what do you see?  100 games that start with the word “zombie”. Another 100 that end with the word “craft”. And the rest are just throwaway weekend projects that were thrown together and released in the hopes that they might make a million dollars like the guy who made the crappy zombie shooter with the stupid song. I’ve played a lot of Xbox Live Indie Games and I’ve only found about ten games that were any good, and even then with more than half of them I’d have to add the qualifier “for an Xbox Live Indie Game”. A similar lack of quality control is what nearly tanked the videogame industry in the 1980s. Hell, poor Paul had to stop writing Minus The Pudding: The Best of Xbox Live Indie Games because there wasn’t anything good.

I love the idea that amateurs can have a way to get into your living room and get discovered, but maybe this whole thing would have worked better with two Indie Game Marketplaces. One where you pay for them and one where they’re all freeware. Want to play around and make a game? Cool! Play around and when you’re done go ahead and put it into the freeware market. Think you’ve made a game good enough to justify paying for? Submit it to quality control. If it’s a pile of utter garbage, you get sent to the freeware playground; if it’s reasonably good, you can sell it.

We didn’t need an iron-fisted tyrant to shoot down anything that wouldn’t make more than $1M, but we did need somebody to keep the kids at the kids’ table while the adults try to make some quality games.

Uniracers—sorry, I mean Old Spice Racers—is an Xbox Live Indie Game based on the Old Spice brand. I don't remember Old Spice being one of the Spice Girls. Old Spice is a brand of male grooming pro