Note: this review was written based on gameplay from late February 2013. Periodic updates are scheduled for the game and problems that existed at the time I played it may have been corrected, or new ones may have since developed.

Sometimes when I’m bored, the Xbox is on, and I reach Opus Dei levels of masochism, I pop into the Xbox Live Indie Game Marketplace to see what new ways people have found to cannibalize their fellow indie game developers’ games and construct them into some kind of gaming version of a human centipede, fusing together zombies, Minecraft, Internet memes, and Avatars in a way that isn’t particularly flattering to any of them.

That’s when I came across ArcadeCraft. Judging from the name and the marketplace it’s on, I immediately figured it’s some kind of ersatz Minecraft (that’s the “craft” part down) and that it randomly makes some kind of empty references to older arcade games (and that’s the “arcade” part. Eat your heart out, Nancy Drew.). 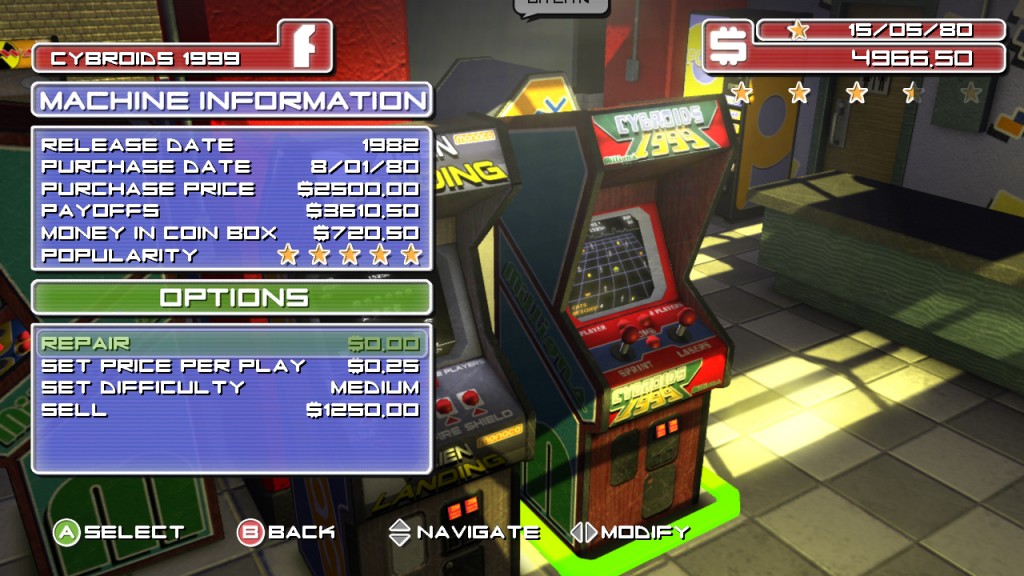 Turns out I was wrong on both counts. It’s actually a tycoon-type simulation game where you build your own arcade.

Like a puppy that’s been kicked one too many times, I approach the game with cautious skepticism. You’re not going to trick me, ArcadeCraft; I’m trying your demo before I buy.

Just booting it up I notice the game looks nice. Not just nice for the Indie Marketplace—that’s damning with faint praise—but it’s good enough to be a proper XBLA release. I find myself even impressed with minor touches for which an easy way out might have tempted lesser developers. For example, when naming your arcade, rather than the default Xbox virtual keyboard popping up, the game allows you to edit the name right on the building’s sign. It’s a dumb little thing, but it’s an attention to detail you don’t see much in the Indie Marketplace. Even Avatar integration is done well. At this point I find myself so hopeful by the fact that an indie developer didn’t cut every corner they possibly could that I went ahead and bought the game.

Being an arcade owner you must, of course, purchase arcade machines to make money. The games available are spoofs of actual arcade games. Space Rocks in place of Asteroids, Alien Landing substituting for Space Invaders, and Contractor Twins for Mario Bros. This is where there’s more impressive attention to detail. Each of these games will be available for purchase in your arcade on the actual year and month that their real-life counterparts were originally released, and will be available in the same style cabinet (normal, cocktail, sit-down). You even have the occasional option to purchase Japanese imports. 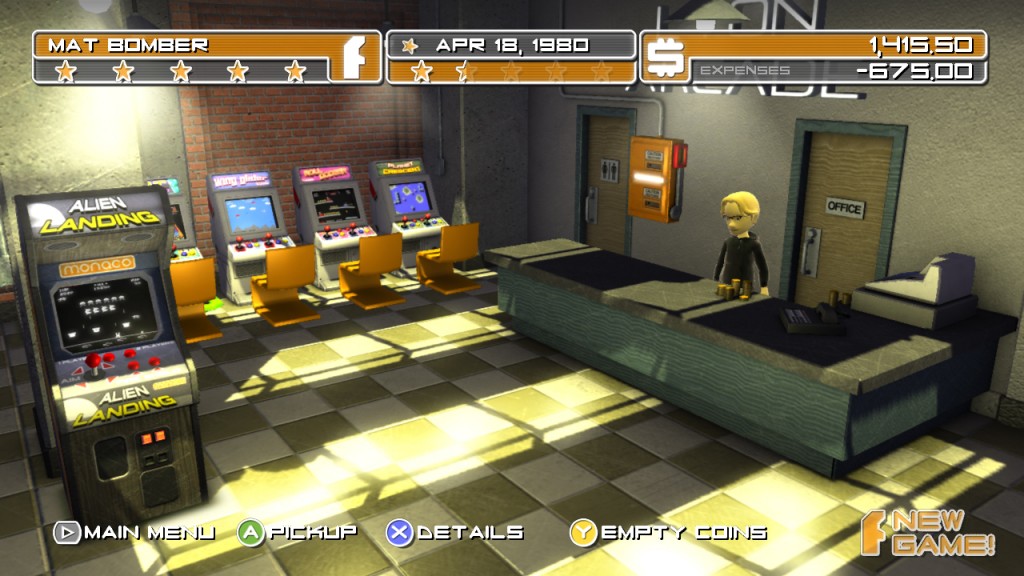 You can easily lose yourself for a few hours in ArcadeCraft’s gameplay. You’ll find yourself struggling a bit at first to make the money necessary to pay your monthly bills and keep the arcade afloat, but after a while even though expenses increase, so too does your income, and it tends to become easier to maintain. You can also tinker with your games’ settings, increasing the hardness or cost in an attempt to make more money, then you go to each of your games and dump out the quarters to claim your mountain of those sweet little silvery discs.

Money can also be spent in decorating the arcade by doing things like painting the walls, painting a mural, and installing neon because, hell, it’s the 80s. This increases your popularity and gets more people in your arcade dropping quarters.

Though it’s a good time, the gameplay isn’t perfect. There’s a few other things you have to look out for around your arcade, other than just machine management. One is angry gamers. When you find them, you need to boot them out of the arcade before they damage your machines. This works well; it keeps you on your toes. There are also occasional coin slot jams that require you to physically pick up your machine and slam it down several times to clear the jam. That’s fine too. Something that does not work well at doing anything but making me yell “Oh, Christ, not again!” are power outages. When your power goes out, you have to pick up and put back down every single one of your arcade machines to turn them back on. In the beginning of the game it’s not a big deal to do that to four or five machines, but later in the game when you’ve got 30 machines you better believe it’s a right pain in the ass. This is the kind of game that sucks you in and gets you hooked for hours at a time, but I found nothing breaks the spell quite like those stupid power outages. 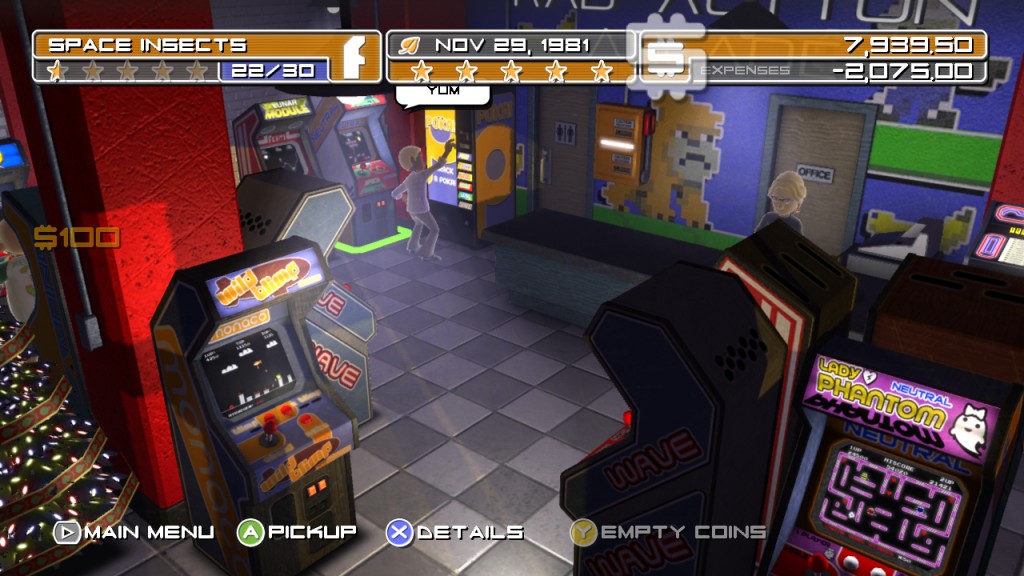 Another downside is that, although as I mentioned before, you can change the games’ settings, I found it rarely helped you to do so, as raising the price or difficulty usually resulted in patrons becoming quickly disinterested and probably ended up costing me money in the end. Since that approach doesn’t seem to pay off, it leaves you with limited opportunity to employ some kind of strategy; you basically just buy games when you feel you can afford both them and your normal monthly expenses. Endgame play becomes even more tedious where, once your arcade is filled with 30 machines, it essentially becomes you just going to every machine you own and emptying out coins—and by the time you’ve finished, the machines you started out with are nearly filled up with coins again. In what little time you don’t spend dumping quarters, you sell your least popular machines and replace them with new machines when they become available.

You can also hire employees to assist you. Unfortunately, there was only one employee available to help me dump out coins when I played. Hopefully employees with varying tasks will make it to future updates.

This seems like a long list of complaints, and it is. ArcadeCraft has quite a bit to improve upon. But, despite all these problems, the pros still outweigh the cons. It still manages to be a very addicting casual-style business sim that will suck your time away before you even realize it’s gone.

ArcadeCraft is good enough to expose the majority of XBLIG for what it is—a festering mass of excuses. You no longer get to make games that look offensively awful and expect a free pass just because it’s “indie.” You no longer get to make games with ironically bad gameplay because “lol, it’s indie.” The game may not be perfect, but it shows what’s possible when you’re willing to put a solid effort into your work and you have a real passion for the subject matter behind your game.

A piece of edutainment for the much neglected "Not in Elementary School" demographic.