There’s a lot of Xbox Live Indie Games that pass through here for review and, frankly, most of them are terrible and I just can’t be bothered to review them all. So, I’ve been working off of this flow chart every time an indie game passes by my way: 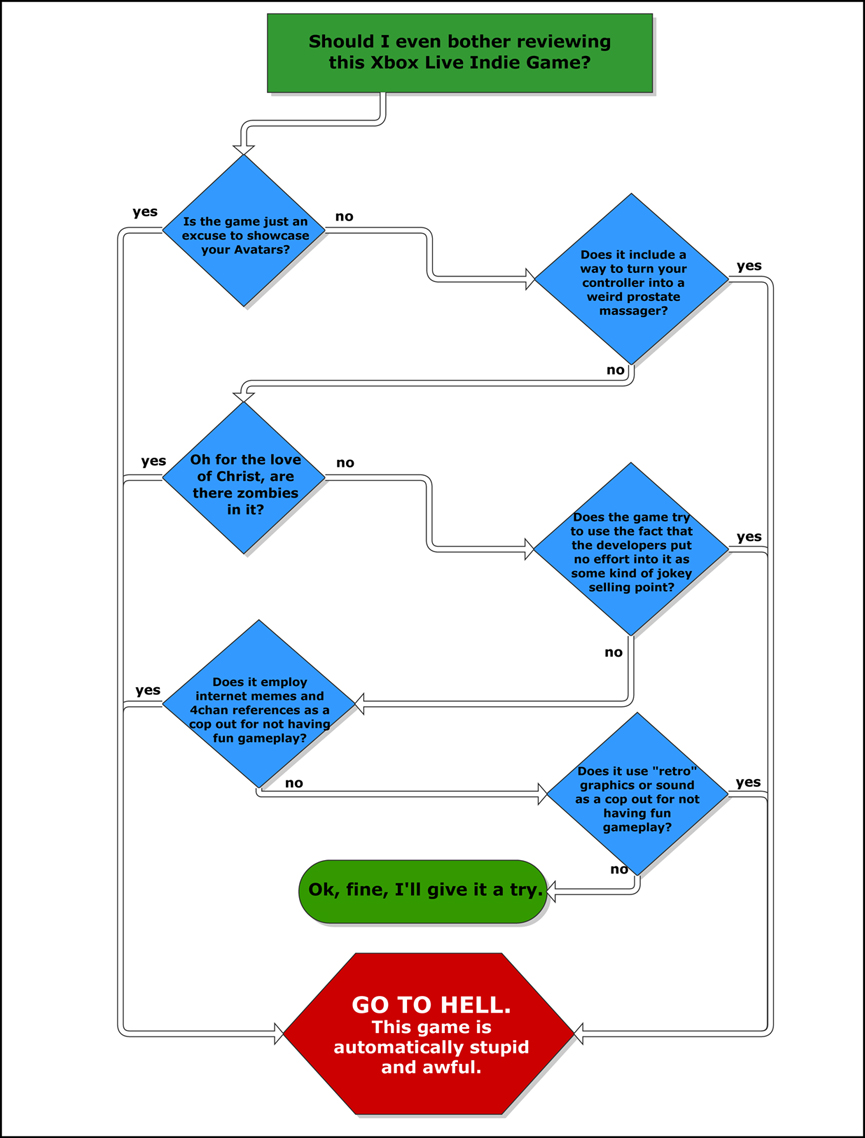 Thanks to this chart I don’t have to play through uninspired, unoriginal XBLI games and, instead, end up playing nothing but creative, original games like Steam Heroes, which is…A BEJEWLED RIP-OFF?! GODDAMN IT, THE FLOWCHART DOES NOTHING!!!

Though, to be absolutely fair, it’s not entirely a Bejeweled rip-off. The difference is that when you match up different shapes into groups of three or more, it corresponds with actions taken in a battle you’re engaged in.

So it’s a Puzzle Quest rip-off.

It’s a real-time steampunk Puzzle Quest rip-off, though, which means that you have to make matches obscenely fast and everything is arbitrarily covered with gauges and gears. Although, as far as the steampunk aesthetic goes, it seems like there were two art directors on this game. I assume one saw a lot of old-fashioned brass typewriter keyboards and nixie clocks online and thought that looked cool, while the other one read a bunch of old-fashioned superhero comic books and developed a thing for primary colors. The result is a mismatched, dreary-meets-flamboyant art style that looks like what would happen if Bioshock were set in Pee-Wee’s Playhouse. 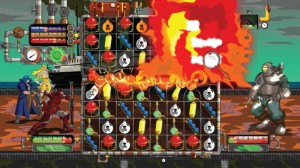 The game primarily consists of two modes: Story Mode and Steam Heroes mode. Story Mode follows your trio of heroes in their battle to save Steamland from the evil Baron Von Smog. The story plays out just about how you would expect—the heroes run into a more powerful villain, defeat them and then find a yet more powerful villain, repeat, repeat, repeat. It’s not much of a story, but hell, it’s made Dragonball millions of dollars so who am I to judge?

Each enemy you encounter has a different power they can use against you. Some can turn potions on your gameboard into poison or make your bombs work against you, but most just resort to making it hard to see the gameboard, which is one of my biggest videogame pet peeves. <soapbox>The difficulty from a game should come from the gameplay itself, not from the fact that the game just broke itself.</soapbox>

Once you get through a fight, the pre- and post-battle quips can get pretty painful to listen to, usually being from the “Halt, Evildoers!” school of corny dialogue. Voice acting in the game could be better, but I’m willing to cut indie games some slack here. I don’t really expect the developers to go hire real voice actors—especially for a story that is just some phoned-in filler anyway. And besides, I’ve played a whole lot of pro-games with worse voice acting. Symphony of the Night, anyone?

It’s sad that it’s come to this, but I was pretty happy with the game simply for not being broken. It played smoothly, did what it was supposed to, and the only glitch I came across was when Baron Von Smog and I ended up killing each other at the same time it said “Defeat” on my screen, but the victory dialogue played in the background and it ended up playing the epilogue movie anyway. I would have been pissed if it said “Victory” but made me do the level over as a defeat, but since things worked out in my favor I couldn’t care less.

The other game mode is Steam Heroes Mode, in which the enemies are much harder and you try to beat them as quickly as you can in order to rank on the game’s global leaderboard. Also, if you defeat them all, you can defeat the game’s true final boss enemy. I played against the first enemy about six times, lost every time, yelled vulgarities at my TV, and gave my Xbox the finger before giving up on this mode entirely. You can keep your stupid real final boss. I didn’t want to see him anyway. So there.

I’ll come clean with you: I hate Bejeweled. I hate it lots. However, if I want to be impartial, or at least create the illusion of being impa 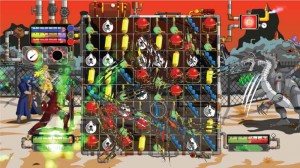 rtial, I have to try to pretend that the fact that this game’s primary gameplay elements are incredibly similar to Bejeweled does not immediately make it something that isn’t worth playing. This, of course, is like going to a car dealership and trying to ignore the fact that the car you’re looking at is 25 years old, has three tires and is currently on fire, but I’m going to do it anyway. If you aren’t a Bejeweled fan, then you probably recognize that a game of Bejeweled plays out like someone with severe OCD organizing their spice rack—endlessly rearranging with nothing to show for it, leaving the player a little emptier inside than they were coming into it. But, if you are the type of person who…ugh…likes to play Bejeweled, then you could probably do worse than picking up this game. It’s nothing that hasn’t been done hundreds of times before with minor tweaks, but it delivers a solid Bejeweled game, integrates a real-time fighting element and offers some online competition, as well.

I had a conundrum to overcome, readers. After considerable time away from GameCola, I had to choose the perfect game to review upon my grand return. A game that would speak to you—communicating my p