The last console you’d expect to see a dancing game on would be the sausage-fest that is the Xbox 360, but Konami must have thought they could release a fairly good DDR on this platform.

Dance Dance Revolution Universe is so obviously Ultramix 4 with a new paint job. But it doesn’t even look as good as Ultramix 4. And there are almost no decent songs in this game.

So why would you own Dance Dance Revolution Universe?

Yeah, why would you?

This doesn’t even pass as a DDR title. The music is mostly synthy driven club-styled music, which isn’t what the series is about at all. I admit that some of it can be quite nice to listen to, but I’d kill for something recognizable amongst this trashy list (with a nice solid beat for me to grind my ankles to). 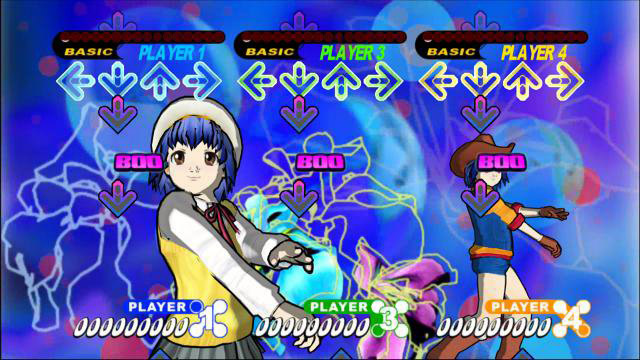 To make the “Quest Mode” beatable, you have to turn off the background videos. Trust me on this; it’s a design flaw disguised as an “innovation.” You’ll want to do this anyway, to turn half-minute loading times into two-second ones. Doing so strips the game of most of its visuals, but results in making the game actually playable.

Of the ten downloadable songs, six or so are decent; but all of the DLC is already on the disc, like in Beautiful Katamari. And the PAL version has less DLC available than the NTSC versions, although the missing content may still be on the disc somewhere.

Also, the PAL version of Dance Dance Revolution Universe has an impossible Achievement: you can’t “clear all songs,” since one of the songs is missing from the main game as well.

All-in-all, this game fails to impress. The mat that comes with the game is of a really good quality, but that can’t make up for the appalling faults with the game itself and short-changing us with the DLC.

Should you buy it? No. If you have a PS1- or PS2-compatible dance mat, it’s better that you spend the extra cash getting hold of Supernova instead.

"PlayBox" console currently in development will be fully functional as advertised as soon as you turn it on.