Welcome to “Inside the Guide”, the column that gives you a behind-the-scenes look at the art of writing guides for videogames. “Inside the Guide” was the first column I ever wrote for GameCola, and I’m sorry to say that it’s also going to be my last, as this column marks my official retirement from GameCola. Maybe I’ll be back again someday, or maybe I’ll write the odd column every now and then, but it’s goodbye for now.

It’s been a long and crazy ride for me here at GameCola. I’ve won Employee of the Year twice, had my DNA sent into outer space, and I’ve written/edited over a hundred editions of “Inside the Guide”, “The Ten Reasons”, “Carbonated News”, “Fabricated News”, “Oh, the Humanity!”, “Versus Mode”, “Pimp My Cola”, “The Grass Is Always…”, podcasts, videos, comics, fanfiction, blog posts and various reviews. Sadly, it is the way of the world that all good things must come to an end, by which I mean my hands will fall off I write any more, so I’m stopping now. Seriously. That is one long resume.

Speaking of writing things, there is little-to-no writing involved in making video walkthroughs (I’ve done my fair share of those, too), which probably explains why they’re so popular nowdays. And in fact, today’s installment of “Inside the Guide” deals with the two video walkthroughs I worked with in July, 2009.

Of course, my final column would not be complete if I did not mention Nancy Drew. In July of 2009, the twentieth Nancy Drew game, Nancy Drew: Ransom of the Seven Ships, was released. Also that month, I received an email from Stephen Ng of IGN.com, who you might remember as the person who interviewed me as their FAQer of the month in April 2009.

Stephen, who’s in charge of IGN’s walkthrough section, was happy to announce  that IGN was finally thinking about opening up their extensive video footage system to walkthroughs. They just needed a few test dummies to make sure it’d work, and he thought I’d do a good job. All I had to do was make a guide “that integrates video and text”.

Where in the World is Carmen Sandiego?: Treasures of Knowledge

In July of 2009, I was challenged with doing a walkthrough for Where in the World is Carmen Sandiego?: Treasures of Knowledge. The challenge? Write a guide for this game without ever playing it.

What I ended up doing was watch someone’s video walkthrough for the game, which was rather entertaining. I wrote down everything the person did, and that was my guide. There are definite holes in the guide, mainly in the parts where the game player skipped over optional material (uh oh!). On the whole, I thought I did a pretty good job for someone who had never played the game himself.

I received two emails about this guide. One was from a third-grade teacher, whose students got stuck on the game, so she used my guide to find the solution. She thanked me very much for helping her, and I said she was welcome. The other person who emailed me was stuck with a slider puzzle in the game; he didn’t know how to move the pieces of the puzzle around. I wrote back, saying I was very sorry, but I have no idea how the controls for the game work, because I haven’t ever played it. Needless to say, he was less grateful than the teacher was.

Well, that’s it for “Inside the Guide”! I figured video walkthroughs would be an appropriate topic for this, my last column, because even though I’m leaving the GameCola writing staff now, I’ll still be around the GameCola YouTube page for the next month or two, wrapping up my video walkthrough for Ace Attorney Investigations: Miles Edgeworth. And maybe I’ll do another Phoenix Wright walkthrough after that, too. I love those Phoenix Wright games.

So there’s no need to panic. I’m not going to disappear from the Internet completely. Sure, it might be so long for now, but you can rest assured that I’ll still be out there somewhere, making guides like I made GameCola articles: with helpful information, lots of laughs, and of course, squirrels. 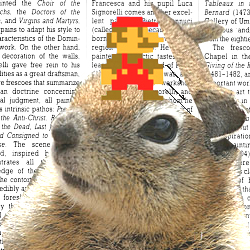 Scott wins. I don't know if I actually want to see the Scott Pilgrim movie or not, but this trailer of the upcoming game based on the movie...based on the comic book...which appears to be in part bas