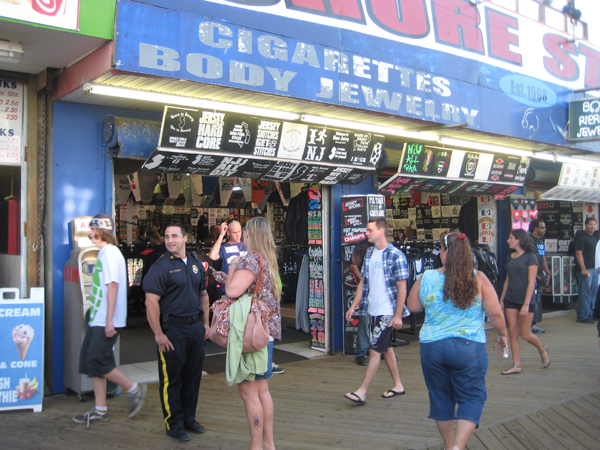 I saw them filming The Jersey Shore when I went to Seaside Heights over the summer.
Here, you can see a police officer making sure no real people get inside the store, presumably
to protect the show’s integrity.

Thus, I think that The Jersey Shore is the worst disaster ever to strike mankind since you destroyed your town with a tornado in SimCity. It makes people think that everyone who lives in my home state is—for lack of a less offensive term—actually from New York, which completely horrifies me. My part of New Jersey has cranberry bogs, herds of deer in our backyards, blueberry and corn fields, and an entire forest of “pygmy pine trees“; but now, thanks to this show, New Jersey is known almost exclusively for being a carnival of assholes.

Speaking of which, here’s a CollegeHumor video of a parody RPG starring the cast of The Jersey Shore. It’s kind of impressive how well their wacky misadventures and hilarious catchphrases translate into a videogame.

Keep those legs on the GROUND Grass Cat!