In 2009, Justin Smith ventured forth with a game that would change the gaming industry forever. A title that would blow the fish out of the water. A game for FREE that beats the living daylights out of your silly Black Ops and your dumb Medal of Honor. What Justin Smith created was a game that defies the the very laws of nature—NOTHING this good is ALLOWED to exist. This game is the thing you’ve dreamed of since you were born:

Justin Smith is a genius.

…Wait a second. They drive cars!?

Enviro-Bear 2000: Operation: Hibernation is a game of a brand-new genre. I’m pretty sure we haven’t had a physics-hibernation-simulator-sandbox before. It’s also an insane cross between a time-management sim and a first-person driving game. Not too dissimilar to Ski-Free and Hover.

The goal is as follows, taken from the official read-me: 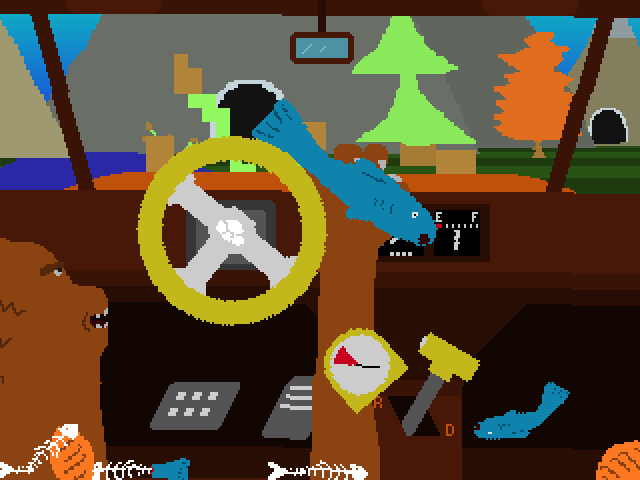 Complicated and at times thoroughly punishing, Enviro-Bear 2000 is a pretty game, as well as a pretty daunting game. Though on your first time playing the game you will absolutely fall in love with it, that does fade after you get completely mauled by frenzied badgers more times than you’d care to remember.

It starts out simple. Find some fish or some berries, eat enough, then drive into a cave to hibernate. Just like the read-me says. You have five minutes to do so. The most happy and poppy music plays in the background, and it’s the complete opposite  of your rapid rush to feed and hibernate. It makes the game. Madcap bear drivers dart around you, making your journey even more of a hassle. Bump into trees by accident, and you may be attacked by a swarm of wasps or a hungry badger. If you’ve got more than one badger in the car, they’ll probably end up moving the gearshift as they’re jumping around.

There are little tricks, too. For example, driving and steering (at the same time) is tough, so placing a heavy item (such as your clock timer) on the gas pedal means you can dart around easier than before. As you progress, a handicap is placed on you for the next year depending on what you did in the previous year.  Ate quickly and got to the cave early? You might be spared. Had to hurry? You might oversleep and get a minute or four deducted from your five-minute timer! Ate only fish, and lots of them? Well, they died out the following year, so now berries are your entire diet.

And now, an excerpt from “Bear’s Diary”…

In the first year, I was careless. I only ate fish.

So during the second winter, the fish were all but fished out. I had to forage for berries instead.

When the third winter came, I had overslept. I only had three minutes until winter. I panicked.

I managed to forage in just enough time. Was crashing into other bears’ cars.

The moon was low, the badgers were restless.

Then, just when I hoped to eat berries, I was attacked by wasps.

They stung my paw. I started  going mad.

I clawed around to catch them, but it was no good. 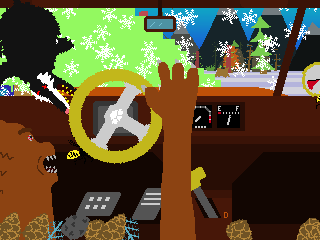 Then a badger jumped into my car.

He was fidgeting around rapidly.

I tried to grab him but he evaded my paw.

The clock…Winter had arrived. I couldn’t drive for all the thick snow.

And that was how I died. I didn’t even survive four winters.

They said gaming was dead. Yeah, right. Get to your fifth winter, and you’ll find that both time and nature are against you. How long can you last?

I don't know what it was with 1994, but it sure ushered in some great sports games (well, technically, it was 1993 when the games came out, for the 1994 season). People were getting used to the Wall b