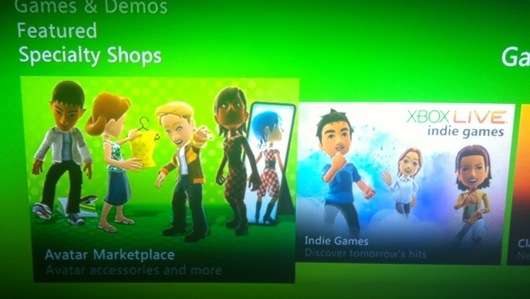 This probably doesn’t affect you, because you didn’t know that Xbox Live Indie Games were a thing, despite my best efforts; but now, thanks to the 360’s latest dashboard update, they really won’t be a thing.

Microsoft has switched up where you can find Indie Games on the 360 dashboard. Previously, you could find them huddled close to the Xbox Live Arcade Games section of the dashboard—where, presumably, people would go if they wanted to buy a videogame. Now they’re located in the “Specialty Shops” section. You know what else is in the “Specialty Shop” section? Avatar items. In fact, Avatar items are actually listed before the Indie Games, because, as a videogame fan, you’re more likely to want to buy a spiffy hat for that Avatar you keep forgetting exists than to buy an actual videogame.

The big problem here is that the only reason people knew Indie Games existed was that they occasionally came across them when trying to access Call of Duty DLC on the dashboard. Now, since Indie Games aren’t even listed as “videogames” on the dashboard anymore, no one will ever find them ever again.

This is a shame, because a certain GameCola writer may or may not be currently developing a game for Xbox Live Indie Games Specialty Shops.

You'd think that the game distributors would do something to make their titles stand out from the crowd, but—here's the thing—they don't.