Originally, I had hoped to submit Metro 2033, by the Russian development studio 4A Games for the Xbox 360 and PC, as the Scariest Game of the Year for the 2010 GameCola Videogame Awards, but unfortunately I played it just after the deadline for submissions had passed,  and to be fair, that category doesn’t exist…yet. Metro 2033 really came out of left field for me as a random discounted purchase on Steam that I had heard some good press about but that I did not expect to leave me both frightened and surprisingly pleased. It’s not often that a game is so intense that I have to get up and walk away from it; but when it does happen I’m left with a deep and abiding respect for the experience.

Metro 2033 is set in a post-apocalyptic Moscow, 20 years after a nuclear apocalypse has consumed the world. Survivors eke out a meager existence in the metro tunnels below the city, setting up a variety of outposts and dwellings while trying to defend themselves for the relentless onslaught of mutants and raiders. The surface is enveloped in an endless winter, ruled over by remorseless winged predators that soar through the poisonous atmosphere. The story centers on Artyom and his quest to secure help for his outpost, which is currently beset by a new and dangerous foe. The story sounds a little cliché, but the plot unfolds in a very interesting fashion, with many well-fleshed-out characters, some philosophical discussion, and even an interesting twist at the end. 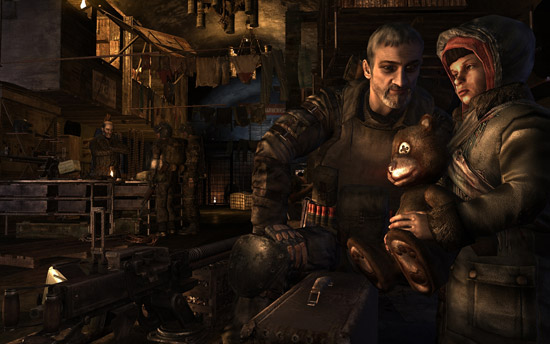 On the surface, Metro 2033 sounds a lot like one of the recent Fallout games, and in many ways it is. It’s a first-person shooter set in a post-apocalyptic setting, and that’s what drew me to it initially. That’s where the similarities end, however, as the game lacks the RPG elements of its American kin and puts a greater focus on first-person mechanics. Metro 2033 employs a system similar to F.E.A.R. and other modern shooters where the player has one slot for a pistol, one for a rifle, one for a shotgun, etc. and can only carry one such weapon at a time. The main character’s health is rechargeable (as opposed to a hit point system) and players only die when they have taken too much damage at once. Players navigate through a serious of levels, either fending off or sneaking past enemies, trying to survive long enough to find the next weapons cache or merchant in order to re-stock on supplies.

The game puts an incredible emphasis on realism, portraying post-apocalyptic life in a way that is much closer to the likely reality than what you find in the Fallout series, what with its seemingly endless supply of guns, ammo, caps, and stimpacks. Everything is either broken or in the process of breaking down in the game: weapons, ammo, equipment, facilities, all of it. Your flashlight, a necessity in the dark tunnels of the metro, is powered by hand, so players have to stop every so often to crank it or else be left in total darkness. Likewise, many of the weapons in the game are air-powered and require pumping at regular intervals, though their lack of gunpowder makes them decent stealth weapons.  Railcars have to be powered by hand, generators have to fixed, and players have to find their way around passages or buildings that have crumbled. In fact, the only thing NOT broken in the game is the pre-war ammo that can be found by the player. However, not only is this ammo worth saving for difficult enemies, it is also used as the game’s currency, so it benefits players to hold on to it.

The graphics are excellent, and there’s a lot of attention paid to making the game look as creepy as possible, from the cracks in the walls to the gaping maw of a mutant as it leaps toward you. One downside, though, is that a lot of the human character models look very similar, so it can be rather hard to tell one character from another.

The music is good as well, varying between orchestral to hard industrial depending on the area and current action, and many times the music fades so that the player’s only accompaniment are the ambient sounds of the metro (i.e. rusted metal creaking, screams, mutants skittering through the tunnels, etc.). The voice acting is decent, by video game standards, but by far the best sound effect in the game is the ragged breathing and gasping that occurs while wearing a gas mask. On the surface and in certain parts of the metro it is necessary to wear the mask to survive the toxic air, however a constant supply of air filters is required to keep the mask working. As a filter wears down, Artyom’s breathing gets more ragged and forced and, combined with the regular pressures of dodging enemy humans and mutants, it makes for a truly chilling experience.

Speaking of chilling, remember when I mentioned how I respect games that can make me need to stand up and walk away? That hasn’t happened for me since Silent Hill, but this game finally did it again with, and I mean this in all seriousness, Librarians. Librarians are a type of mutant that resemble large, monstrous apes with shark-like mouths  that live in the ruins of Moscow’s main library. They’re capable of shredding Artyom in a few hits and are extremely resistant to damage, with the only way to stop them from tearing you to bits is to stare them directly in the face. Yes, they’re essentially like the Boos in the Super Mario series, but far more terrifying. Combine this with the fact that while backing away from one of them you’re incredibly likely to bump into ANOTHER one while having very few weapons AND extremely crappy ammo AND a limited amount of time due to your quickly expiring air filter, and you’ve got the makings of an incredibly frantic and frightening mechanic. 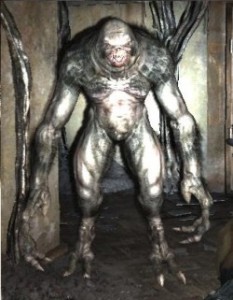 Metro 2033 is not a game without its flaws, but these are easily overshadowed but its excellent sense of realism, thoroughly creepy atmosphere, and impressive graphics, music, and gameplay. Add to that the fact that an attentive gamer can find it for cheap (I got it for $10), and you have a game that’s well worth the price. Also, who knew Russia was capable of making quality games? I sure didn’t, but now I’m looking forward to what they have to offer in the future.

Mega Man discovers that Dr. Cossack's citadel is the pits.