Not to be outdone by Nintendo’s press conference last week, today in Tokyo, Sony officially unveiled the successor to the PSP: previously known as the PSP2, and currently codenamed “NGP” (for “Next Generation Portable”), thus continuing the trend of videogame console names getting worse and worse as they get further away from the original (see also Revolution/Wii, Nitro/DS, and Dolphin/GameCube. That last one’s probably not the best example.) 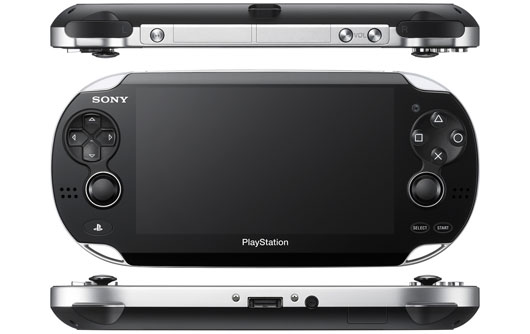 Unlike its predecessor, the NGP will come packaged with two actual analog sticks (rather than nubs), a motion sensor, a touchscreen, a touchpad on the backside of the system, cameras on the front and back, and a “thank you” note for Nintendo. It also has a GPS and, according to the official trailer, giant basketballs. It does not, however, have a UMD drive, because nobody cares about backward-compatibility. In fact, the system won’t use disc-based media at all; rather, NGP games will come on advanced “memory card” technology, which sounds suspiciously like cartridges to me. Welcome to the future!

Additionally, I’m guessing we can expect NGP games to have better graphics than PSP games, though I’m not sure if anyone still pays attention to that.

But by far the biggest news about the NGP is that, according to Joystiq, its UI will support Trophies! YES! UI TROPHY SUPPORT! …Does that mean that the games themselves will support Trophies, too, or just that we’ll be able to access our PS3 Trophies through the NGP? Either way, it’s a step toward my dream-future of having cheevos tied to literally everything I do.

Via PlayStation.Blog, here’s some of the games we can look forward to on the NGP:

The NGP is scheduled for release in Japan this holiday season for an indeterminate price. Considering Sony’s recent history, I would except something in the ballpark of way way waaaaaaaay too much.