Ace Attorney Investigations: Miles Edgeworth 2 was released on February 3rd in Japan, and all sorts of spoilers have started flowing in. The basic plot and a list of characters have been made public, and while you’re waiting to hear when this game will reach the States, why not read up on what happens in it? 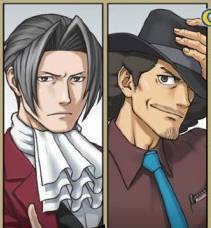 Case One: Edgeworth and his friends go to see a speech by the President of Zheng Fa. Someone attempts to kill the President, and Edgeworth begins to investigate, despite interference from the President’s bodyguard.

Case Two: Even though Miles Edgeworth is the best prosecutor ever, he becomes a victim of the “Prosecutor Purge,” a program designed to find and fire incompetent prosecutors. He is put under the direct supervision of Judge Busty Brown, who criticizes him constantly during his investigations. She threatens to fire him and replace him with Prosecutor Stuck-Up Loser.

Case Three: Edgeworth spends a lot of time with his father’s buddy, Johnny Afro. Johnny offers Edgeworth a job as a defense attorney, seeing as Edgeworth is probably going to be fired. This case includes an extended flashback sequence where you play as Edgeworth’s father, in a trial against Manfred von Karma.

Case Four: Someone tries to kill Kay Faraday, but she’s not allowed to die because she’s one of the main characters. So instead, she gets amnesia. The crime scene? The building where Judge Busty Brown works.

Case Five: Nobody has told us what happens in Case Five yet. I’m guessing that Edgeworth will set up Judge Brown with Johnny Afro. In gratitude, she will let Edgeworth keep his job. Meanwhile, Prosecutor Stuck-Up Loser goes home, because nobody likes him and his coat hanger hairdo. 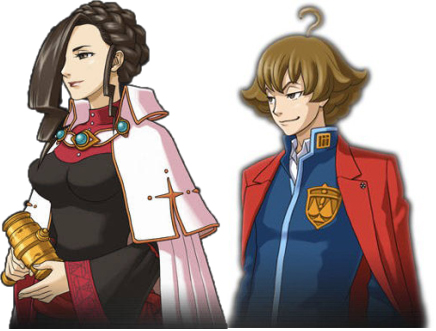 Judge Busty Brown and her prodigy, Prosecutor Stuck-Up Loser. All names are subject to change.

The second case takes place in a prison, so expect cameos from various Phoenix Wright murderers. Regina Berry, from the circus in the second Phoenix Wright game, is also going to appear. There are four reappearing characters from the last game—Shi-Long Lang, Ema Skye, Franziska von Karma, and Larry Butz (who just can’t seem to avoid getting accused of murder)—and everyone else is new.

It took them about nine months to translate the first Miles Edgeworth game, which means we could see this game in English just in time for the holiday season. They haven’t announced the game’s official English title, so we’re still hoping it will be Ace Attorney Investigations 2: We’ve Got the Funk.