Activision finally pulled the plug on one of my favorite series. Starting with Guitar Hero III, Activision and Neversoft have been behind the helm of this illustrious and long-winded series of games. I’m going to miss Guitar Hero.

Something touched me deep inside, the day the music died.

“When they didn’t try, it was obvious.”

Guitar Hero III = Outstanding. It took what Guitar Hero I and II invented, and pulled it forward with harder songs, updated visuals, and a new roster of characters, guitars, and venues. It was shockingly successful, and this taste of success left Neversoft thinking that Guitar Hero was a cash-cow. 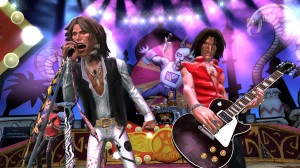 With Guitar Hero: Aerosmith, Neversoft took the game they previously made, changed a few features and named it a brand-new Guitar Hero. This was the first sign that Neversoft’s approach to the series would be to saturate the genre with “shovelware” sequels.

I still enjoy the main Guitar Hero titles, but I can only say that I thoroughy enjoy one of the band-related spin-offs. When Neversoft tried to release a good game, they pulled out all the stops. But when they didn’t try, it was obvious.

“Outsourced games are to blame.”

Some of the outsourced games are to blame for the death of Guitar Hero. The Nintendo DS Lite Guitar Hero games, plus the Wii versions, were handled in part by Vicarious Visions, which can best be described as a company with a nack for making hideous things look slightly less hideous. GH: Van Halen and GH: Smash Hits were produced by companies entirely seperate to Neversoft. None of these games managed to capture that series “magic,” and they reeked of amateur production. Produced in a short time-span and using outdated architecture, the outsourced games were shovelled onto as many consoles as possible, just like all the in-house titles.

The long-awaited song export for Van Halen is now almost certainly never to be. The song export for Smash Hits is a truly mediocre selection. Besides GH: Metallica, the Guitar Hero spin-offs are plagued by terrible graphics—yes, worse than they usually are. The outsourced Guitar Hero shovelware games are of low value. If you own an intellectual property, then you should be the one developing it. Not someone in some studio you’ve never heard of, for consoles people don’t play.

“Something for everyone—a bad and costly move.” 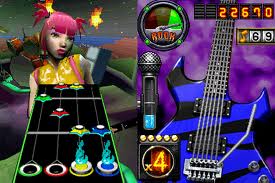 The current-generation consoles have been supported with downloadable content, but not all of the songs made available are any good. If you were to compare the ratio of great songs to bad across Guitar Hero and Rock Band, it’s pretty obvious who wins.

Activision even published a slew of Nintendo DS Lite Guitar Hero games, including Band Hero, with tacky guitar and drum grip peripherals which are not compatible with the fat Nintendo DS or the DSi. The games can only be played with a supported grip controller, so releasing three games would obviously mean a poor profit turnout.

We’ve seen DJ Hero, merely a rhythm-action baby, come and go. Amazing setlists, and a fascinating, well-built controller. But the problem is simply thus: Activision wanted to make sure there is something for everyone. This was a bad and costly move.

“They had to always go one better than the opposition.”

Guitar Hero World Tour was released after Rock Band. Seeing Harmonix as their rivals (but never seeing them as their competition), Neversoft decided that they had to always go one better than the opposition. With World Tour, the guitar and bass got a necessary control makeover, tightened and more lenient. But the new additions, drums and vocals, were poorly implemented.

Neversoft looked at Rock Band for clues to success. It feels as though Neversoft decided that the solo frets (which I never use) on the Rock Band controller were the reason for Rock Band‘s success (and not the amazing soundtrack or fresh visual style, or the proper implementation of its instruments). Meeting a requirement to waste more plastic, Guitar Hero World Tour came out in unison with brand-new guitar and drum controllers. These are great controllers, and I still enjoy playing with the World Tour guitar controller. The problem with the guitar controller, however, is that the sliding solo touch-strip does not work at all.

“Here’s the traitor, your majesty!”

The drum-kit for Guitar Hero is a standard MIDI-compatible drum-kit with extra pads and cymbals that the Rock Band drum-kit does not have. This means that the drum-charts are, at times, much more exciting than their Rock Band 1 counterparts. But if you play World Tour with a Rock Band 1 drum-kit, the charts are completely mince. Totally unplayable.

“There is such a thing as too much.”

Music games are now boring. It is entirely Guitar Hero‘s fault for having so many releases in the last few years. There is such a thing as too much—and we’ve hit it. Guitar Hero went out on the truly fluke-tacular Warriors of Rock. I fear Rock Band can easily do the same, if Harmonix is not careful. However, Rock Band has something Guitar Hero didn’t, and that’s great downloadable content.

The cult classic returns for the 30th anniversary! Does it stack up?