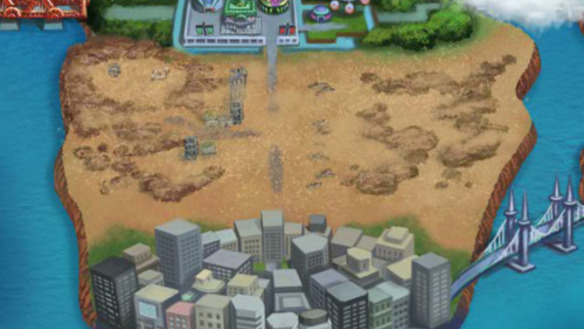 Sure, Pokémon may not generally be considered to be offensive (except by the same caliber of person who burns Harry Potter books for being evil childrens’ witchcraft manuals), but Cracked.com recently shed some light on the fact that Nintendo’s Pokémon Creation department has gone the way of Capcom’s Mega Man Boss Naming department, in that they have completely run out of good ideas. The difference is that, when Capcom runs out of ideas, they just start picking farm animals at random; however, when Nintendo runs out of ideas, things get a bit…darker.

Those playing through Pokémon Black/White know that much of the game takes place in Unova, a metropolis modeled after New York City. Modeled a bit too well after New York City, actually—right down to a recreation of Ground Zero from the 9/11 terrorist attacks.

That’s pretty awful, but where does Kyurem come into play? Nintendo may be lacking some tact here, but they at least had enough tact to refrain from referring to the Ground Zero location as “part of the city that was destroyed by bloodthirsty religious zealots, killing thousands of innocent people.” Instead, they said that two meteors hit the city, and that one of those meteors…spawned Kyurem. That’s right: Kyurem is a Pokémon spawned from the 9/11 attacks. If that’s not bad enough, Nintendo decided to add a small touch that puts it over the top as the most offensive Pokémon ever: Bulbapedia.com lists his height as being 9′ 11″.

Everyone knows about the laws of supply and demand. Say the word "economics" and that's the immediate thought. People generally know that as price rises, demand falls and supply rises—and if price