I like to imagine that if I were a ninja, I’d be an intelligent and proficient one. Clinging to the shadows, ready to strike, like a rapist in a dark alleyway. Would-be victims can rest assured, though: if my performance in the Tenchu games is anything to go by, then my abilities as a stealth assassin are lackluster at best.

Tenchu is merely a piece of punctuation away from being a serial killer simulator. Watching the enemy’s every move, working out their pattern, then striking from the darkness as would a grief-stricken Jackie Estacado. You’re planning out a set of perfect murders in the first degree. Killing indiscriminately, slicing the throats of those stupid enough to be on your bad side. In an extra and more personal touch, Tenchu: Shinobi Taizen also includes the level editor and mission creator from the second Tenchu game, so that we can use a serial killer simulator to pretend we’re killing people that we really, really don’t like. 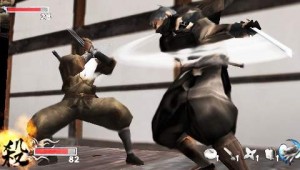 The graphics are rudimentary, even by early PSP standards. The textures look really blurry; compare them to Wrath of Heaven, and they look mediocre. On the plus side, they resemble the 3D graphics that the iPhone can muster, so the game was still years ahead as far as Apple hardware is concerned. Ha-ha-ha—yeah, I’m a PC.

The game environment is very square and uniform, unlike the levels that were featured in Fatal Shadows or Wrath of Heaven. The overall selection of scenery is much lower, and the graphics are spoiled again with a terrible draw distance of about two meters. Some of the graphical issues can be lessened by clocking the PSP to 333mHz, but that significantly eats away at battery life.

The game has a few character stories to complete—four of them following good guys, and one allowing you to play as main series villain Onikage. These missions can also be played using any other character in the game, including a ninja-dog, or even just any of the minor enemies. An extra helping of delicious hash-browns goes to K2 LLC for allowing us to play as the corrupted CEO from Wrath of Heaven’s Through the Portal stage. Bosses and enemies from the whole series appear, including those who were only just introduced a few months before, in Fatal Shadows.

The soundtrack has been reverted back to memorable ditties, after the atmospheric Fatal Shadows did away with actual music (a move I’m sure they rued completely). Themes from the whole series are present, and all of these characters, items, music tracks, and environments from Tenchu 1-3 & Fatal Shadows can be used in the fully featured mission editor. 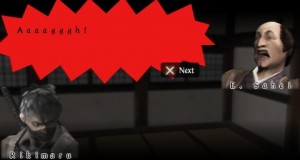 Time of the Assassins allows me to build an office, populate it with workers, and throw grenades at them. Or I can run around as a giant bear, pretending that I have let loose a killer bear in the office.

After Shinobi Taizen came out in 2005, I created and uploaded a lot of custom missions to the Internet. Some of them are available in a mega-pack, which is still being hosted.

I will review them seperately soon, and go a little in-depth about level creation and logic.

If you’re not into Tenchu, you should be. The mission editor, though reminiscent of the crappy Create-a-Park mode from the PlayStation Tony Hawk series, is fun to work with and squeezes more out of the game. You will get endless satisfaction from dicking about in the mission editor, and from playing custom missions created by other people.

The European version of Tenchu: Time of the Assassins is recommended, as the menus are entirely in English. However, Tenchu: Shinobi Taizen loses a lot of its charm and splendour through being translated. The main theme is devoid of lyrics, and the English voice acting is disgusting. This doesn’t make a lot of sense, as the voicework is stunning in Fatal Shadows, which was also translated and published by Sega. I imagine that the sound quality must be a hardware issue.

Overall, there’s the editor, an extensive single-player mode, and a decent multiplayer mode, including co-op and versus. Time of the Assassins has plenty of content, but being released a whole year after the Japanese release, it was already totally dated at launch. I would love to give the game a much higher score, but I’d only be lying to you. Minus the editor, this game would just about scrape average.

Tenchu has had its time, but it has now been assassinated.

Jonathan: I'm back, and with three new Minotaur powers!