I first played Echoes of Sorrow while I was in the midst of the “hidden object game” craze that took over my life for about two months earlier this year (see this month’s “Gamer Girlfriend” for more on this). Of several dozen games I bought, downloaded, and played during this period, only a handful stood out as truly excellent games. As it turned out, Echoes of Sorrow happened to number among them, which was one of the reasons I jumped at the chance to review it.

I should preface this review by saying that hidden object games are not for everyone; and if you already know that this genre isn’t your cup of tea, you probably won’t enjoy this game, no matter what praises I may lavish upon it. However, if you are into hidden object games—or even just curious about them—this game is definitely one worth checking out! 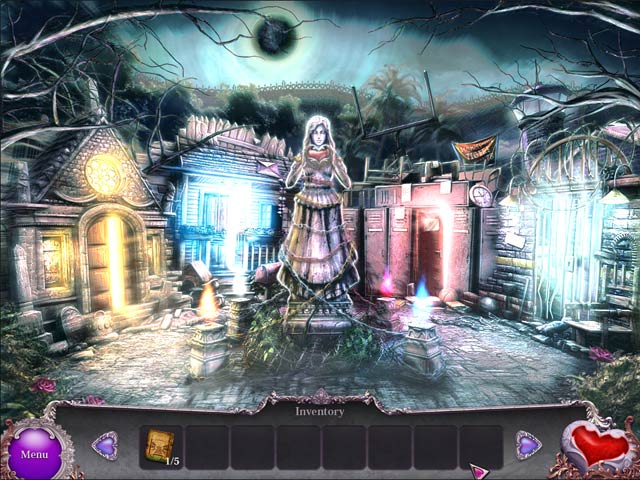 The story’s premise is simple, yet effective: A woman is being chased by an unknown assailant; she trips and hits her head, falling into a coma. Her consciousness is then transported to a dream world, where she has to piece together who she is and what has happened to her. The whole “amnesia” thing might be  a little clichéd, but in this case, I thought it was handled very well. In fact, one of the things I really liked about the game was the distinct lack of exposition. Instead of wasting time on elaborate setups, the story simply reveals itself as the game goes along and the main character discovers more about herself. Each scene you complete unlocks the painful memories that have been burdening her, literally releasing the “chains” from around her heart.

The story is emotionally compelling, and highly personal, especially because most of the narration is done in the second person (even though the visual viewpoint is first person). This subtle use of language shifts the focus of the story to “you”, placing you in the character’s shoes and enabling you to feel what she feels after each new revelation. It’s a neat trick, all things considered, and it helped the story to feel that much more real.

My only real issue with the story was that some of the plot details struck me as odd. Unfortunately, discussing them means revealing several key plot points, so if you don’t want to know, please skip the next couple paragraphs:

My main complaint with the story had to do with the motivations of the killer. You discover that he has basically been bumping off people close to the main character for years. He killed her college sweetheart in order to get close to her, he killed her father when the old man discovered the truth, and he even killed her twin sister when….when they were both little girls. Wait, what? I mean, if I misinterpreted this, someone feel free to correct me, but the game seems to be implying that the killer has been obsessed with the main character since she was eight years old, to the point where he felt the need to run her sister over with a car for no apparent reason! Granted, maybe that particular incident was his first encounter with the main character and was actually an accident…but it sure as hell didn’t look that way from the movie scenes. As the car races towards the sister, you just manage to glimpse an out-of-focus image of the driver,  and all you can see are his GLOWING RED EYES (I swear to God) that are fixed right on the girl. That did not look like an accident to me.

So yes, this guy appears to have been obsessed with the main character since she was a kid. Does that make him a pedophile?  I don’t think so, because his obsession with this one person continues throughout her adolescent and adult life. Of course, he could be a devil or demon of some sort, rather than an actual person. It’s never explicitly stated in the games, but he is definitely creepy as hell, and—as previously mentioned—he  has the DEVIL’S OWN EYES. They only glow red in that one early scene, but for the rest of the game…it’s really hard to explain, but I have never seen a character’s eyes look so evil. How did this woman not immediately spot the fact that he was trouble?

Moving on to gameplay, I thought that the mechanics of Echoes of Sorrow were actually pretty good, at least as far as hidden object games go. The hidden object sections aren’t too difficult; and each one contains an object that then becomes part of your inventory, which gives them a relevance that I appreciated.

In each area of the game, you are tasked with rediscovering the main character’s memories by collecting photos/files/slides, which gradually reveal the truth of her life. You also have to get rid of the evil shadow (a subconscious manifestation of the invisible attacker from the game’s opening) that is haunting each area. For the most part, you follow through the areas sequentially, but some areas do have to be visited more than once because they require items that you don’t unlock until later in the game. 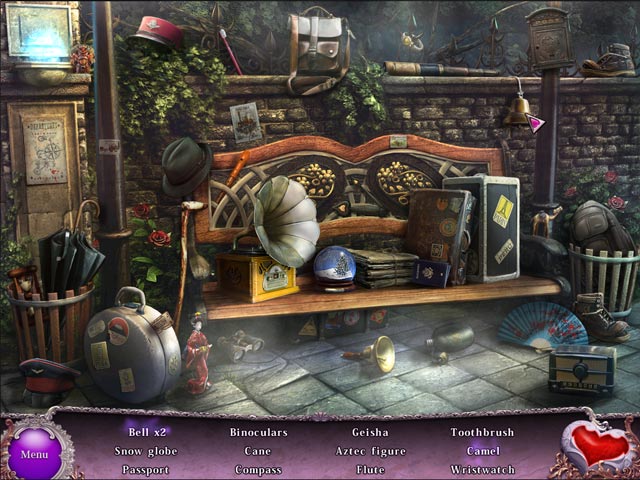 The music was definitely a high point of the game. The best way to describe it would probably be haunting and sad. The soft piano melodies are spooky and wistful, and they reflect the character’s sense of unease, sadness, and confusion. Also, the game occasionally turns off the music altogether, so there are times when you are left with complete silence…that is abruptly broken by jarring sound effects, like a school bell or a clanging cell door. The overall effect is unsettling, especially when the creepy music kicks back in again.

The graphics have a lovely, painted style; although the animation is extremely simplistic. Moving stills are about all you get during the movie sequences, and the rest of the game is mostly still, with only some slight animations thrown in. Still, the graphics are very beautiful, and the palette contains a lot of greys and purples, which evoke a mood that is both gloomy and dream-like.

Overall, a very well-done game that I highly recommend!