Welcome back to my series about the handheld Castlevania games, which will remind everyone which game is which, because honestly, they tend to blur together after a while. Today’s game is the second GBA Castlevania game, Harmony of Dissonance.

People generally agree that Harmony of Dissonance is not very good. In fact, it’s the worst of the three GBA Castlevania games. It also happens to be my favorite of the three games. I’m weird like that.

The plot of the game, which is disturbingly similar to the plot of the previous game, is that three people have entered Dracula’s Castle. One person is Juste Belmont, the hero. Another person is Maxim, who starts out as Juste’s friend, but gets progressively evil as the game goes on. The third person is Lydie, who is being held hostage by Dracula and needs to be rescued.

There’s also a subplot about amnesia, but fittingly enough, I don’t remember what it is.

The best part about this game, hands down, is the graphics. It has super-fancy graphics, and everything looks great. I like the graphics, but I think it’s kind of weird that they gave the series a complete graphical overhaul, after only one game. It’s especially weird, because the graphics were a high point in the first game, so they didn’t need to be revamped.

Despite the new graphics, most of the enemies and locations are copy/pasted from the first game. This is either going to strike you as a staple of the series (“Every Castlevania game has to have a tower filled with clockwork gears!”), or as laziness on the part of the developers (“I have to fight bat enemies again?“). In fact, the only place that I can really remember that was new and different was the skeleton level, where everything was made out of bones. You have to fight giant spider skeletons, and there was a room with a huge Pit and the Pendulum-style pendulum axe, and the skeleton theme was just done so well that I made no bones about it. 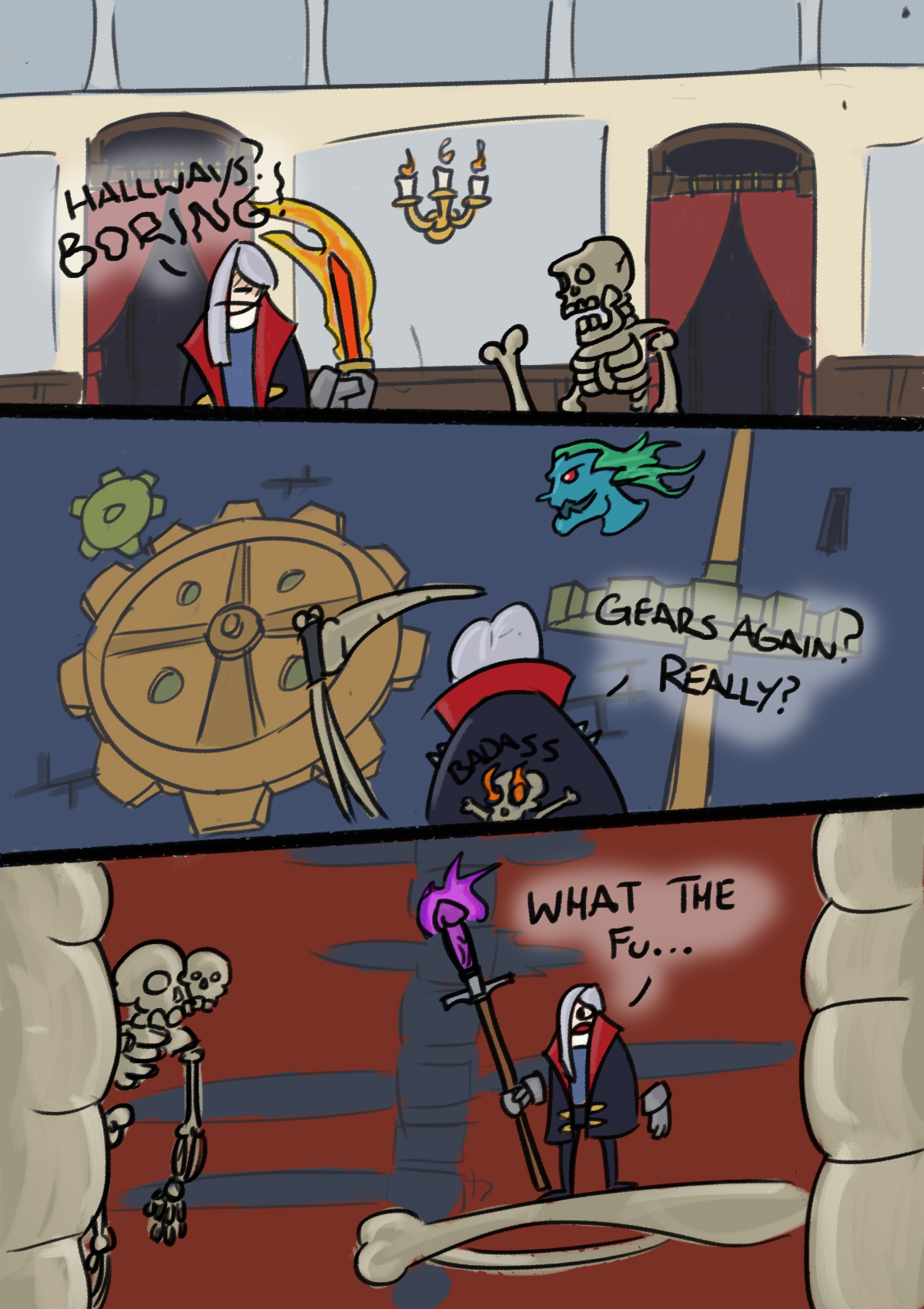 I like the fact that they basically doubled the number of boss battles in this game. People complain that the boss battles are super-easy, but I didn’t think that made them any less fun. And sure, some of the boss battles used the old “let’s take a normal enemy, but make it bigger and call it a boss” technique, but that didn’t upset me either. Who cares if Giant Bat is the same as a normal bat, but giant?

In fact, this boss-creation technique resulted in my favorite boss battle: the one against the blob enemy who’s made out of jelly. They have the normal blob enemy expand, until it fills half of the screen. Every time you hit the boss, it gets smaller and smaller, until it reaches the point where it’s a normal-sized enemy again. At that point, Juste puts the jelly enemy on some toast and eats it for breakfast. It was a deliciously good boss battle.

If I had to complain about this game, I would use the classic “it’s too short” complaint. This game feels a lot shorter than the previous one. This is in spite of the fact that the game has a dual overworld. So basically, you play through the entire castle twice: once when it’s the “good world,” and once when it’s the “bad world.” And the game still feels kind of short? That’s a letdown.

Other complaints I would have about this game include…

All in all, the second GBA Castlevania game is more of the same at best, and a lazy repeat of the first game at worst. It was only the second Castlevania game I had ever played, so I was still excited about the series and the way it was playing out. As I said earlier, this is my favorite Castlevania GBA game, despite its flaws, and I still think it’s more fun than a barrel of monkeys.

The Internets have been abuzz lately with posts about Xbox Live Indie Games, and for once I'm not making a self-deprecating yet hilarious joke: people other than me have actually have been talking abo ...