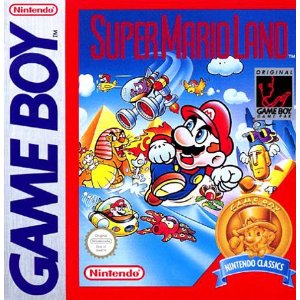 When a launch title comes out for a console, one has to argue that the game could deserve a perfect score of ten, for being the best the system had to offer at the time. Let me remind you that this particular logic led to the discovery of all kinds of sexual diseases and false religious beliefs. Just because a game did lots of new things, that doesn’t mean it should deserve praise by the metric ton. Just because it is the first game for a system doesn’t mean it is the best game for the system, and only after so long can we drop our “shades of ill perception” and take a real, unadulterated glance at the game in question.

One game often glanced back at through nostalgia-tinted glasses is the abominable Super Mario Land. This title saw American and Japanese releases before I was even born. It very loosely follows what is considered the main rules of the Mario franchise, but given that this was released eons ago, one could argue the Super Mario “franchise” hadn’t been truly realized by that time.

I had fond memories of this game, but I certainly don’t anymore. As a child, the game punished me with what I remembered to be fun yet extremely difficult levels. When I recently re-procured this game, I was thoroughly disappointed. Have you tried playing this game in the twenty-first century? It punishes you in all new different ways – there are games that grow old gracefully, and then there is Super Mario Land. Hideous, disgusting and simple, it tarnishes the plumber’s name and soils his reputation. Super Mario Land, oh let me count the ways… 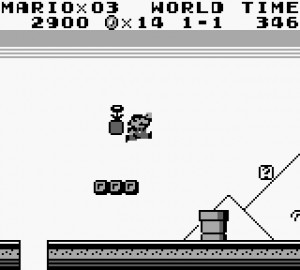 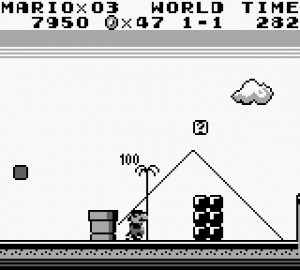 Nintendo Seal of Quality? Whatever you say.

I thought there was supposed to be a standard if games received the Nintendo Seal of Quality. It is the story of my life that some of the games I hold dear are not particularly good games, and in the case of Super Mario Land it seems like everything is wrong and nothing is right. Just like the international Super Mario Bros. 2, the excuse of a storyline in this game doesn’t bear any semblance or relation to the classic Super Mario Bros. story. Many elements are confusing; Instead of the Mushroom Kingdom, Super Mario Land is set in the dumbly named “Sarasaland,” made up of four equally stupid-sounding kingdoms. Instead of the reptilian scourge King Koopa we have a different villain—the Mysterious Spaceman Tatanga. So mysterious that they “mysteriously” forgot to design him with any interesting features, a back-story or even a purpose besides being the main villain. He might as well just be another minor enemy, because Mario shares no dialogue with him and when Tatanga is defeated, that is all that happens. Tatanga is defeated. Game end.

At least one staple is being re-used, the “save the Princess” plot-line. As you might be pleased to find out, we have a kidnapped princess for Mario to save. One of the oddities of this game though is that her name is Daisy (not Toadstool or Peach). In Super Mario Land, our moustachioed plumber adds another number in his little red book. I hope that kiss from Daisy at the end was worth all the shit you went through—hell, the shit you forced me to go through, you ungrateful fat codger. Don’t think I won’t tell Pauline or Peach about this. 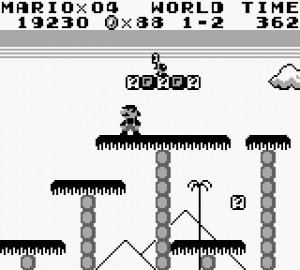 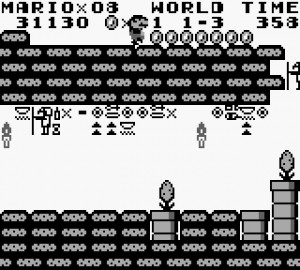 With the Mario series being devoid of decent human characters, Daisy has since made it into pretty much every Mario game that will take her, even though she is a palette-swapped Princess Toadstool. Square have been getting away with this for their Final Fantasy monsters for years, so I really shouldn’t be surprised.

Another obscurity within this game is that Fire Flowers are not “Fire Flowers,” they are “Super Flowers” instead. Rather than throwing fireballs, Mario throws “Super Balls” once he collects one of the Super Flowers. Super balls are bouncy and also help Mario collect coins. In order words, they go completely against the well understood fireball behavior. All of the enemies have strange pseudo-Japanese names, too. Goombas are Chibibos, Piranha Plants are Pakkun Flowers and Koopas are Nokobon.

Even after we point out the discrepancies in the story and character naming, there are then a lot of issues with the controls and physics. I can accept when this game was released and what it actually managed to do, but there are some things we can’t let ourselves forget when we look back to classic games we’re fond of. There is something absolutely wrong with the way Mario moves around, his movement is complicated and controls are at times completely unintuitive. It takes a long amount of time to get used to the way he feels, and you will experience a many number of deaths until you finally familiarize yourself with the glaring mistakes within his leaps and bounds (of which the game makes none). He controls very differently to how he had done in games prior. He is much faster which leads to deaths through misunderstanding of his speed and jump distance.

TO HELL WITH THIS GAME 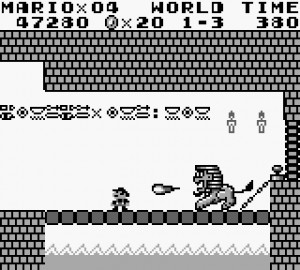 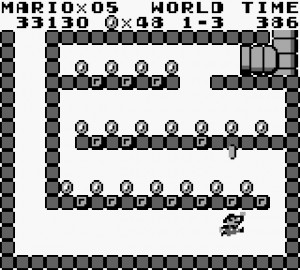 Some of the level design is absolutely boring and unimaginative, and can be absolutely punishing. There is nothing worse than a game that is extremely difficult and a chore to play your way through. There are cruelly placed enemies and obstacles that you can’t react in time to avoid unless you memorize where they are. The levels themselves are incredibly repetitive and blatantly copy-paste elements you have already seen earlier in the level. It is as though the game environment was created out of LEGO pieces; there are only a certain number of possible varieties. They are so short yet they seem to drag on and on.

When you finally get to the boss battle of the current world, you realize just how unnecessary they actually are. The ability to completely skip bosses (like in Super Mario Bros.) makes the bosses seem like a waste of time, and in all fact, only two out of the five bosses in the whole game are mandatory. The rest of the boss encounters can be ignored if you’re feeling particularly lazy. I guess that is how the developers must have felt; particularly lazy. Some enemies are previous enemies with slightly different sprites but exactly the same behavior. Even obstacles from one world will end up getting recycled in another, and some enemies frequent every world. Although the game boasts a variety of twenty-six different enemies, there are about six of those that appear every three seconds in every level. 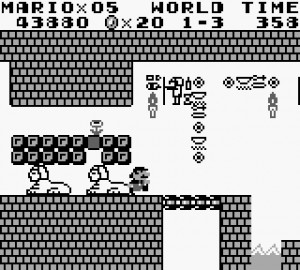 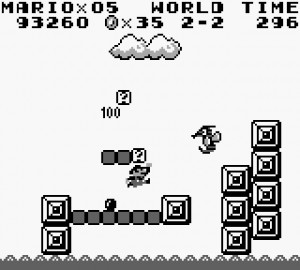 There are four kingdoms in the game, although you wouldn’t even notice they’re different worlds if there wasn’t an intermission between them. That’s a smartypants way of saying that the worlds don’t really show any differentiation, which you think they would if they’re four completely different kingdoms. Apart from a few visual cues in the background, any one of the levels could have their graphics replaced and they’d just be another level of indeterminable origin. I understand that this game was released in 1989, but by that time we’d already had Super Mario Bros. 2! Didn’t the desert stages feel like desert stages, even to the point where switching the graphics wouldn’t have made a difference to the variety of the stage design and layout?

Blaster Master was released in 1988, and didn’t each level feel different to the last one? A year later we get Super Mario Land, and every level feels the damn same and it’s a damn shame. Matter of fact this game recycles elements of itself over and over and doesn’t apologize for it, even when doing so is an act of blatant fucking padding! 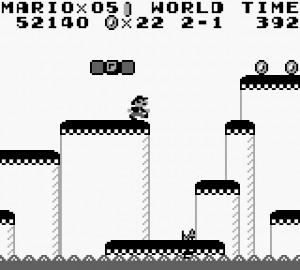 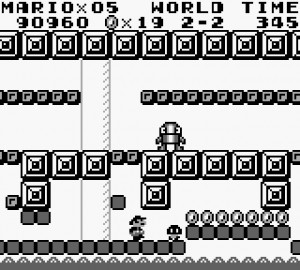 The soundtrack in Super Mario Land is amazing. It doesn’t recycle any music from the Super Mario games prior. It is funky, fresh and hip even in our ears at this time. Cheerful bouncy tunes that calm our nerves and makes our third Game Over more bearable than it should ever be. This is music that proves the Game Boy as a welcome platform for amazing chip-music early in its life cycle. Apart from a decent soundtrack, there is one other thing. The auto-scrolling stages in the Sky-Pop and Marine-Pop are absolutely astounding and really show off the Game Boy tech. If these stages had been tightened up and given more of a presence, the game would have been even better. I love how Mario can collect the Super Mushroom in these stages and it results in both him and his Airplane or Submarine growing in size. I love the music on these stages and the interesting enemy patterns. These stages don’t save the game, but they try their hardest to.

If it wasn’t for the argument that this game was released before I was born for hardware that was completely brand new, I would not be generous towards this game. I enjoyed the trip down memory lane, even if only for an excuse to rant about this dreadful game and get it forever off my shoulders so I don’t have to associate myself with it anymore. I definitely wouldn’t recommend this game to younger players or those new to Super Mario, because you will absolutely hate this game. It is confusing, disgusting and it convulses over your hands whilst you play. Sure, dust this cartridge off and give it another go for old time’s sake, but you will sully your proud and fond memories of this game for the remainder of your life. If you’ve never had the chance to play the major launch title for one of my most beloved hand-held consoles, you’re lucky.

TO HELL WITH THIS GAME

Memo 1: My girlfriend bought me this game. My girlfriend reads GameCola. Therefore, in an effort to still have a girlfriend, I will not be saying a single bad thing about Zoo Tycoon DS in the followin