Saigon… Always dreams of Saigon. Hell, on looks alone this Doom modification scores highly. Using a variety of tricks built into the zDoom engine (which also powered Chex Quest 3), Action DooM 2 is an incredibly well-crafted piece of art, but it’s also chock full of gameplay. Gameplay that, like its predecessor, melds the first-person shooter genre with another classic arcade genre.

The original Action Doom mod turned Doom II into Contra—it has very linear levels, with lots of enemies, infinite ammunition, and everything dies in one shot, both enemies and yourself. I didn’t enjoy what I played of Action Doom, because it went against the kind of gameplay we traditionally know the Doom franchise for.

That should therefore mean I can’t think much of Action DooM 2; but on the contrary, I think the world of it.

Action DooM 2 crosses Doom with the traditional beat-’em-ups, resulting in a surreal first-person brawler. In a sense, the game is very much Streets of Doom or Doom Pilgrim vs. The World. Therefore, gameplay that “packs a punch”, right?

I’m not quite sure what makes this game so damn great—it must just be that everything mashes together so smoothly. Kind of like carrot and swede. But Action DooM 2 is neither carrot nor swede, because they give me gut rot. True story. 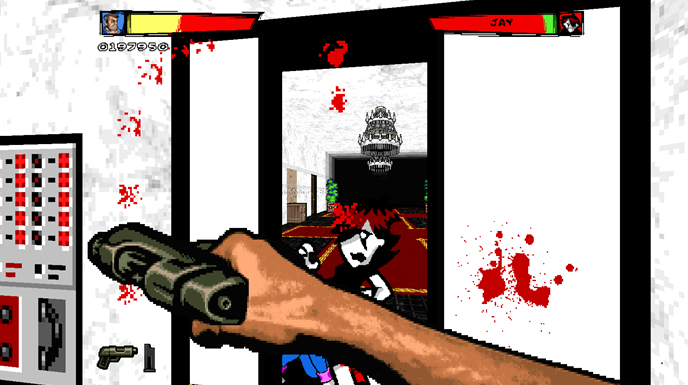 First-person fisticuffs haven’t ever worked properly in videogames. Then again, when is a punch-up really easy? I imagine I’d be awful at real-life fisticuffs unless I had a camera floating behind me to give me a third-person view. Urban Brawl does very well soldiering on against the shooting-things-based nature of the Doom engine. I find it surprisingly fitting and oddly comfortable, so they’ve obviously done something right, even if I’m not quite sure what it is.

The maps are packed full of secrets and stuffed to the brim with attainable weapons. Feel like taking a bottle of Jack Daniels and smashing it over the head of a violent knife-wielding low-life? The pleasure is all yours. You can even have a go with a (spur-of-the-moment) 18th-century blunderbuss. Your inventory is quite large for a beat-’em-up, maybe thirty weapons at a push. Amongst your potential inventory are chains, switchblades, snooker cues and baseball bats. You can also carry one gun, starting with a traditional Doom pistol and ending up with a nice rapid-fire Uzi 9mm submachine gun. There might be more; I just haven’t seen them yet, and I’ve seen a lot.

There is a certain amount of free choice in Urban Brawl, and there are key moments that change the direction of the plot. Your decisions may place you in different levels following different clues. Whether you go to the “bridge”, the “subway”, or the “subway, forest, AND house” is all up to you, depending on the in-game choices you make. To support multiple routes and keep them functioning properly, the zDoom scripting must be very complicated.

Clearly a lot of work went into the game’s visuals. Shadows are done through clever texturing, as opposed to using the buggy traditional Doom lighting. Simple cel-shading effects around walls and objects add to the comic book look and feel. Despite the cartoon style, though, the game isn’t kid-friendly. Cripes! When was pistol-whipping an emo girl considered Dennis the Menace behavior? Best stick to Bad Toys if you’re looking for a kid-friendly FPS, or the aforementioned Chex Quest 3. There’s a few over-the-top jokes about homosexuals, and other humor lying firmly in the gutter. Also, swears. Delicious swears. Put your children to bed, it’s Urban Brawl. 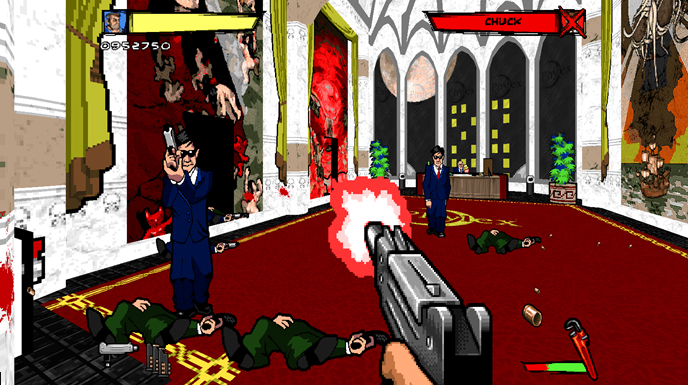 Voice-acted drawn cutscenes in the style of Sin City punctuate the levels, providing the story with its much required development. There are subtitles, but I found them to be grossly out of time with the audio, so I play with them turned off. They are easy to read, in a nice comic book font. The story needs work, but it’s still a great little send-up of “gritty ex-cop” stories.

To top it all off, the soundtrack is a magnificently synthy jazz-infused 12-bar-bluesy amalgam. I don’t even like 12-bar-blues or jazz music! Available for download separately via BitTorrent, this soundtrack has been on my iPod’s most commonly played list for a few weeks now.

Action DooM 2, being small and standalone, is a great little trinket to store on your memory stick, if you’re not planning to do any actual work this semester. Check it out sometime; I’m sure you will chuckle at some of the references (everything from Teenage Mutant Ninja Turtles to Final Fight and even Commander Keen). You can get Urban Brawl: Action DooM 2 from the official website. 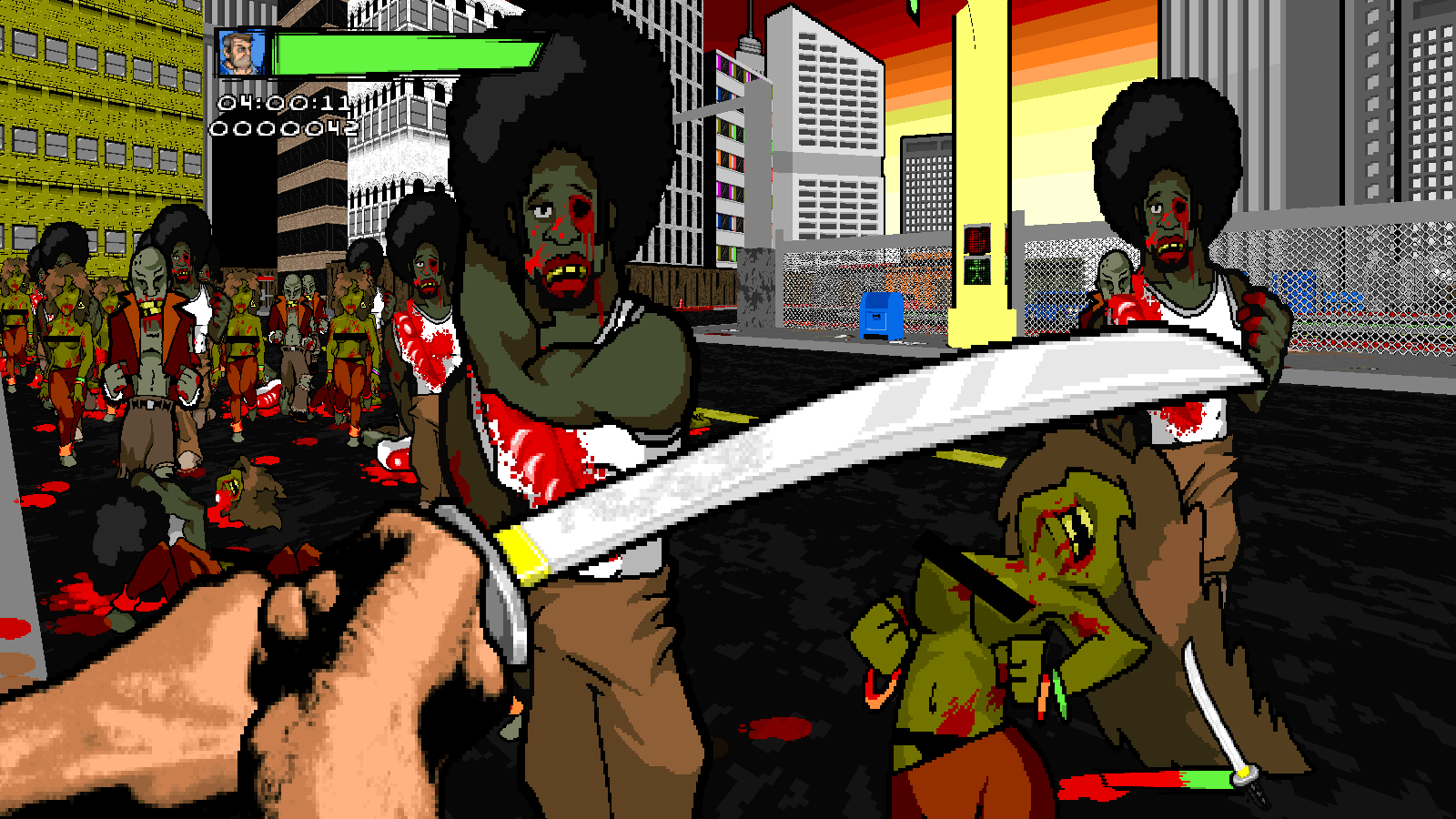 Back in 2008, if you wanted the extra bonus content, you had to shell out $9.99 for the game all boxed with a printed disc. Since the game is no longer being sold, the content is now available for free on the Action DooM 2 website.

Here is what is offered in the free content:

I can’t say the extra content is worth owning, but using the developer console to give myself a samurai sword against the zombies is totally worth downloading the bonus content for. Besides, it’s free, right? Might as well. To give yourself the samurai sword, type in the console “sv_cheats 1″ then “kill”. After re-spawning, it’s “give katana”. You’re welcome.

Let me explain to you guys how I write this column. I sit around all month, trying to think of something to write. I read the news; I look at the Internet—and stare. Then I give up and decide to wri ...