After the last couple of games I had to play for “Minus the Pudding” (see the end of this article), I’m not sure I have it in me to write any more novel-length intro paragraphs. What you see is what you get. Come read about some games, or whatever. I don’t care anymore. 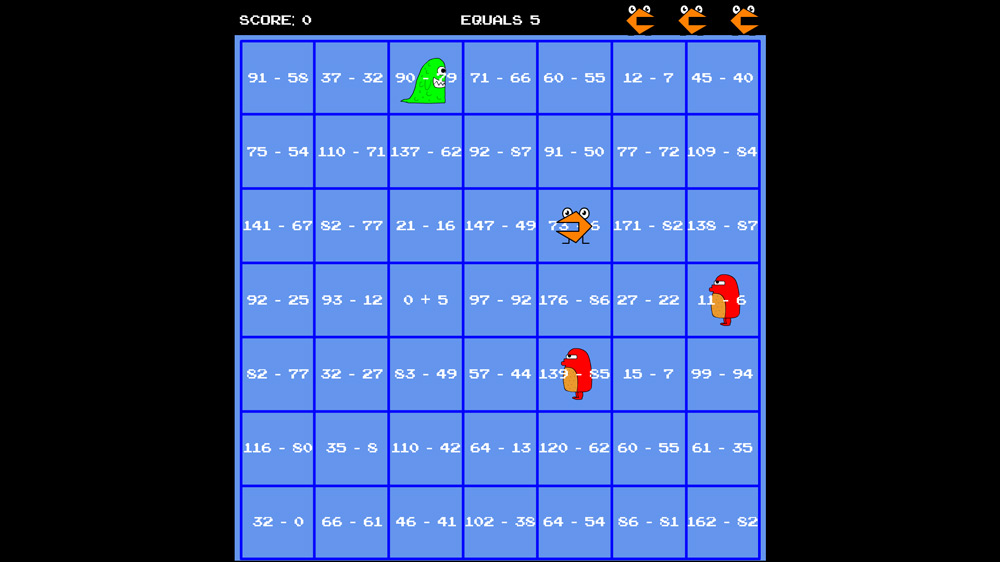 I hate math. I guess crunching is OK (arrrrr, it’s the crunch I love!), but only if there are absolutely no numbers involved. Literally the only reason I downloaded this game was because it reminded me of a freeware game called Number Munchers that I used to play in Ms. Caputo’s third-grade classroom; and it did not disappoint in that regard! Mostly because not only is this game a lot like Number Munchers, it actually is Number Munchers, just with a different name and worse graphics. This is of course to be expected in a service that allows games like Fortresscraft to thrive.

If you’re of a similar age group to me, then you might enjoy this game for the same reason that I did—stupid nostalgia crap—and you might also enjoy such fine XBLIG classics as “Where the F***is Carmen San Fernando?” and “The New Jersey Trail.” I just made those up, but who am I kidding—I would absolutely buy those games. Does anybody want to start working on The New Jersey Trail with me right now?

For those readers who weren’t in my third-grade class, here’s how the game works. It gives you an objective (for example: devour all multiples of 3), and you have to move along a grid, gobbling up anything that aligns with that objective. Also monsters show up sometimes. It’s actually a pretty terrible, Ubergridder-esque game. There were a few times when I was reasonably sure that I ate all the multiples, and it still wouldn’t let me finish. And by a few times, I mean every single goddamn time. My poor lil’ cruncher was just left there, alone, surrounded by monsters and numbers he couldn’t crunch, waiting to die, because dying was the only thing left he could do.

On the plus side, the game lets you input your initials into a high score list, and I dutifully put in “POO” like any third-grader worth his Trapper Keeper would. 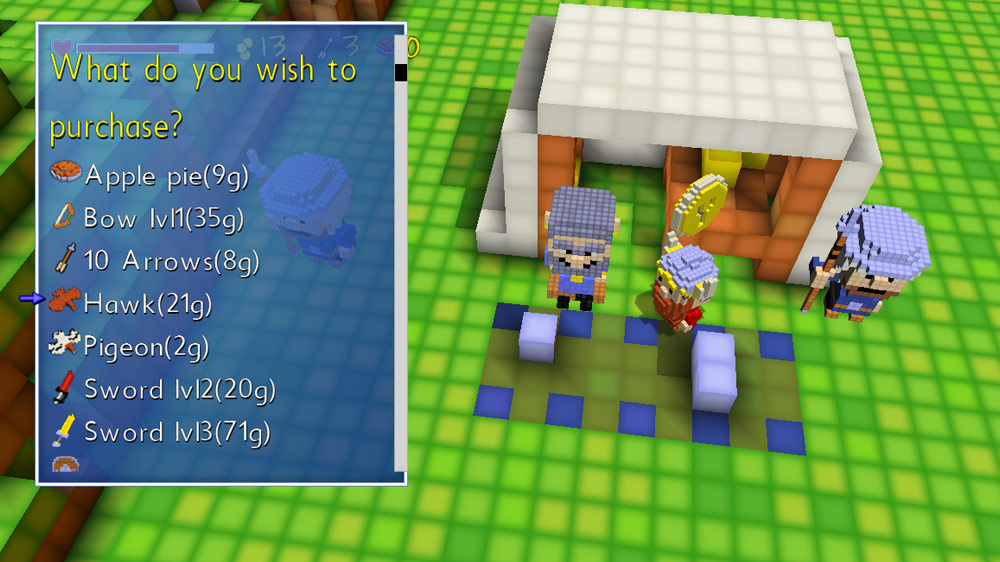 It may seem weird for me to deride rip-offs in one paragraph and talk about how great they are in another, but don’t worry; that’s just because I’m a hypocrite. That’s why I name-dropped Monkey Island in a press release for Life in the Dorms after swearing I’d never support another game that did that. I’m a terrible person; is that a problem?

Anyway, rip-offs! This game looks and plays suspiciously like a low-rent 3D Dot Game Heroes,which kinda makes it a high-rent The Legend of Zelda. The NES version, I mean; this ain’t exactly Ocarina. Actually, I wish I could tell you what this game is about, but I have no idea. In the trial version, I met a grand total of one other person, who told me that I needed to buy a bow before I could do anything else. The entire game for me was just about finding the stupid bow, and unfortunately, I never lived long enough to do so. Before one of the many, many times I died, though, my grandpa popped up to pass along some age-old wisdom: “Don’t forget to eat pie!” That was a bit of a highlight for me.

And speaking of highlights: If I were to write a “The Ten Reasons” column about this game, reasons #1-9 would focus exclusively on all the different beard/beard color combinations you can come up with for your main character, and reason #10 would be his hilariously goofy smile: 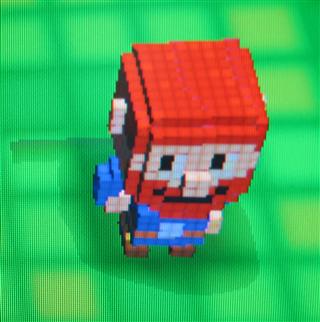 And reason #11 is that his mouth appears
to be drawn on top of his beard.

Also, for a game called Lootfest, there sure didn’t seem to be much loot like, at all. Should’ve just called it Bowquest. 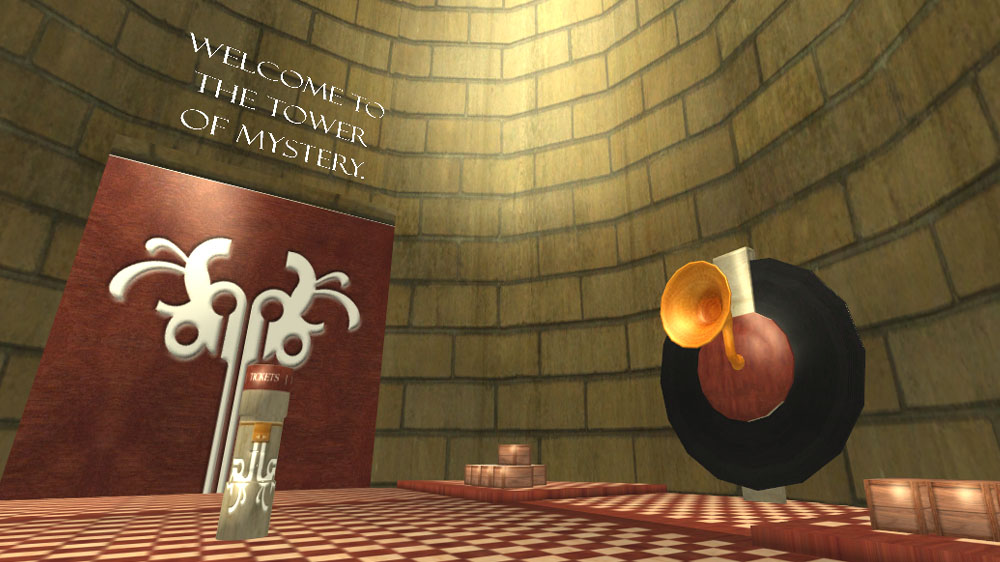 What’s this game about? Well, you’re trapped, and you’re a tourist. Where are you trapped? In a first-person adventure game! Ack, the horror! Also, you’re inside a place called “The Tower of Mystery,” the sort of awesome place I tend to go when I’m on road trips. Inside the museum you can find artifacts purporting to be, for example, the first-ever wheel, the head of a real-life jackalope (which fifty men supposedly died in their attempts to capture, and also it talks), relics from the first moon colony, and what is most likely the world’s largest phonograph, which the game uses to broadcast creepy royalty-free music whose vocals consist of a person laughing maniacally.

So, yeah: awesome setting. And the game does what I always want games set in museums to do—it actually lets me explore the museum. There’s also puzzle-solving, sure, but you can spend a whooole lot of time just examining everything in the museum and smiling at it before you’ve got nothing left to do but progress the plot.

Eventually you do have to move forward, at which point you discover that the game is just one big item-combination puzzle; you pretty much just use each of the items on one another until you win the game. It takes about an hour. Less, if you use the game’s built-in hint system. Still, a dollar for about an hour’s worth of entertainment isn’t exactly a bad deal. I paid $12.50/hour when I originally bought Left 4 Dead new. 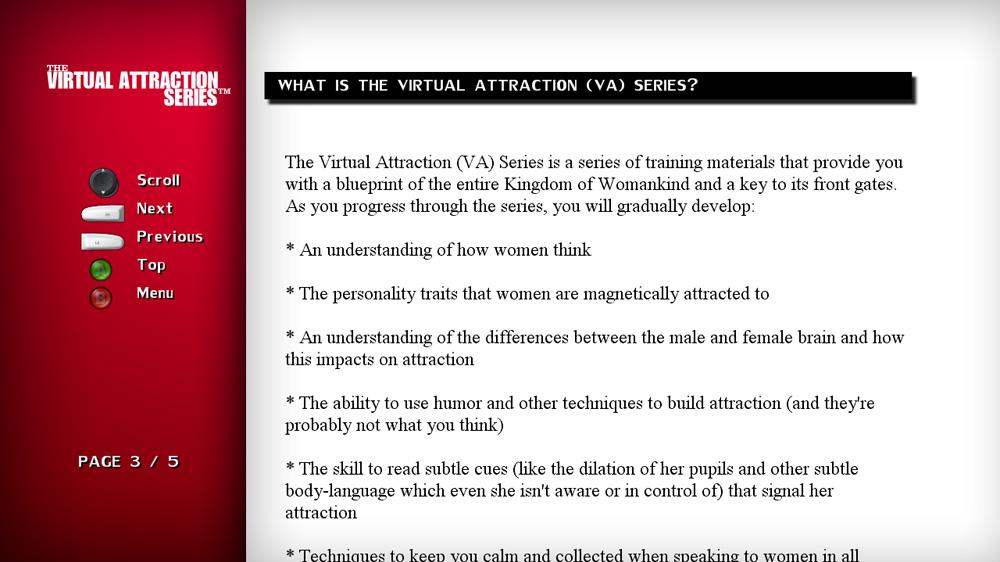 Ah, of course. It just wouldn’t be a proper edition of “Minus the Pudding” without another chefoo by everyone’s favorite punching bag, Silver Dollar–HANG ON! This is by somebody else entirely! What is this?! It’s not enough that we’re ripping off shareware and Minecraft; now we’re stealing from one another?! What’s next—you’re gonna tell me that there’s 150,000 different I MAED A GAM3 W1TH Z0MBIES 1N IT!!!1 clones on XBLIG? Horse feathers.

There’s a disclaimer at the beginning of this game saying that it was designed for entertainment purposes only. “Although the information contained herein is based on sound scientific research, you are ultimately responsible for your own actions.” You mean playing Xbox games can’t REALLY make me the ultimate stud muffin?!

Virtual Attraction is, in all, actually worse than your typical Silver Dollar game. Like, way worse—it’s little more than a book in XBLIG form. And I don’t mean that in the sense that a visual novel can barely be considered a videogame; I mean, literally, there’s just text that you scroll through, telling you all the steps you need to take in order to woo a female companion. It’s an Ask.com article that they’re selling as a videogame. There’s also a quiz to test you on how well you read the material (I’m serious), and then for actual gameplay, you get to talk to a simulation of a woman, where you can practice what you’ve learned and…

That’s it. I can’t do this anymore. I can NOT talk about these games anymore. Do you guys really want to know the secret of how to meet girls? It’s easy. Put your eyes up real close to your monitor. I’ll tell you.

GO OUTSIDE OF YOUR HOUSE AND TALK TO A GIRL.

That’s it! That’s literally ALL there is to it. Just get off your damned couch, go outside, and TALK TO A GIRL. Holy crap, it’s not rocket science! If the girl doesn’t seem interested in you, then you shouldn’t just give up and consult your Xbox about where you went wrong; you should GO TALK TO ANOTHER ONE. Good lord! Repeat until you’re married.

Look, let me be straight with you—I’m going to write an entire paragraph here without making any stupid jokes. As someone who is a) a nerd with no social skills, and b) actually married to a wonderful, beautiful woman, I’m telling you to just go for it. Nothing you could ever learn from one of these stupid games is going to help you more than the real-life experience of actually trying to ask someone out on a date. You can practice on virtual girls (euuuuuugh) and research wooing techniques all you want, but the bottom line is that if you’re compatible with someone, you aren’t going to have to trick them into dating you. They’ll just want to.

Blech. Is there another game I can talk about to get this stink outta my hair? Let’s see what else has come out lately…

How to Find True Love 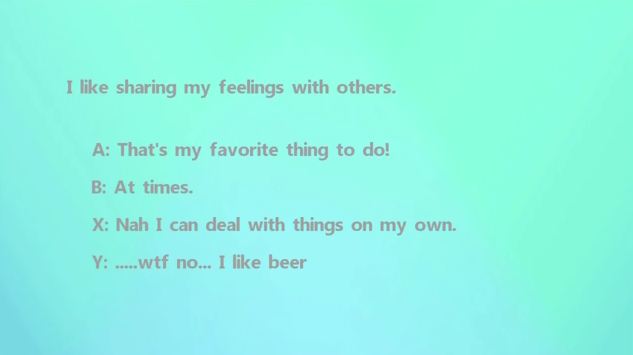 …I give up. Play your own damned Xbox indie games.

Ten reasons why you should bring your favorite arcade game home!