When I first heard about School 26: Summer of Secrets, I instantly wanted to give it a try. It’s aimed at teenage girls, and since I’ve been 16 years old for the past fifteen years, I thought it’d be perfect for me. My teenage years were a heady mix of Street Fighter, re-runs of MacGiver and non-stop Pearl Jam, with a touch of alcohol poisoning and inappropriate relationships with boys. That was well over ten years ago, however, so I assumed that by now, teenagers would be dealing with such dilemmas as: “Will my chlamydia medication interfere with my debilitating crack addiction?”, or “How do I know if I can trust my Mexican abortion doctor?” 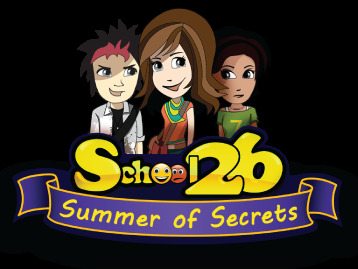 Within minutes of starting this game it became disappointingly clear that, aside from a passing mention of alcohol poisoning, this game was aimed at the much younger teenager and wouldn’t be dealing with anything more scandalous than “how to know if a boy likes you.” The game ultimately wants to know “what kind of friend are you really?”, but once I got over the fact that there was going to be a little less debauchery than initially anticipated, I gave the game the benefit of the doubt and began my high school journey. 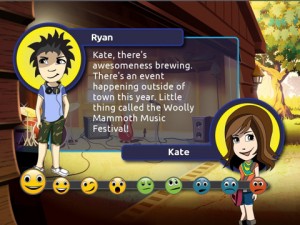 The main character, who you can name yourself, is the nomadic daughter of sensory healers whose job it is to help her friends overcome the social struggles and life-or-death dramas so prevalent in the land of high school. In order to do this, you are presented with an array of predicaments and a series of options on how to deal with them. You will have two main jobs: to make people like each other. and to help your friends get a band together in time to perform at the summer festival. On your journey, you’ll encounter slightly stereotypical gay relationships (Lucas Blackburne is a gay “heartthrob who likes mowing the lawn with his shirt off” and “hates carbs”), straight relationships, a geek, a total bitch, a goth, an annoying little sister, an airhead and a fat drummer.

Most of the game is played through dialogue. You’re presented with some information from one of your friends, and you have the choice of nine expressions with which to respond, which range from deliriously happy to seriously angry. When the situations become slightly more dramatic—if two of your friends are arguing, for example—you can use your tarot cards to help them sort out their problems. The tarot card minigames consist of matching the numbered cards or trying to get the highest/lowest score. 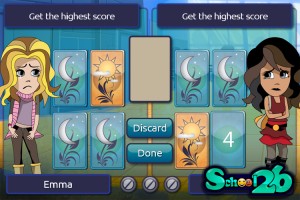 All in all, this game is pretty straightforward and easy to play. If you spill a secret to the wrong person, you don’t get penalised, and if you lose at one of the tarot minigames, you simply play it again until you win. The expressions you choose for dealing with the numerous scenarios in the game also do not really affect the outcome; they only affect your “friendship” rating. It turns out that I am a “space cadet,” but I knew that already. The dialogue can be a bit long-winded in places, and the constant arguing between Andrea and Lucas will get on your nerves, but the animation is well-done and the option of buying the theme song from iTunes is a brilliant touch.

What else is there to really say about this game, except I can’t wait to see what’s next?