On the day of the release of Hector: Badge of Carnage Episode 2, I turned 31.  As it turns out, no one really gives a shit when you reach the age of 31, so Hector and I celebrated it together, and what a day we had… 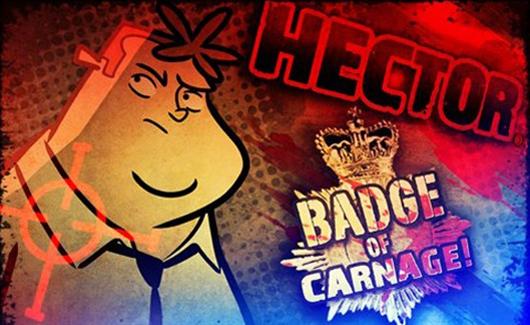 As a severe fan of the first episode, I was anxious to see if the sequel would indulge my love of childish, shallow, slightly offensive humour as well as its predecessor had. One of the things I remember loving about it was its unashamed sterotyping of the British detective. If you are from the UK and are of either Irish, Scottish or Welsh descent, you will be familar with the endless, mostly accurate stereotypes that are thrown your way. With the exception of Michael Ridgaway’s uncanny attempt at a British accent, however, it is not very often the English get the piss taken out of them for our amusement. It was refreshing, therefore—as I sat there in my kilt, eating haggis and drinking Irn Bru whilst simultaneously shooting up heroin and punching my newborn, ginger, fatherless baby in the face—to have a wee giggle at Hector’s wonderful ability to laugh at his Cockney heritage.

As soon as I started playing Episode 2, it became clear that not only have they chosen to continue this theme, they have actually fired it up a notch. One of the first characters you meet is an orphan who will offer to do a “jig for a penny” (WE DON”T HAVE ORPHANS ANYMORE! Madonna lived over here for ten years—completely wiped them out with her forearm veins). He lives in a discarded fridge and, sadly, only has one hand—he lost the other one in a shoe-shining accident. He also lost his dad…he was crushed to death by the crowds at a sausage roll giveaway.  I cannot get enough of this. 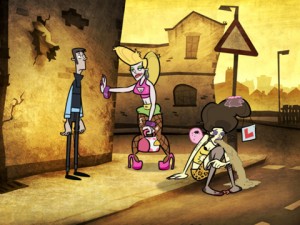 Anyway, we rejoin Hector where we left him at the end of the first episode—held hostage in a building by a crazed psychopath.  By a cruel twist, however, you will soon discover that the crazed psychopath is not physically in the building and has played a trick on Hector, imprisoning him in a room with only a laptop, a pizza and a sniper rifle…and so begins the first puzzle on your journey to ultimately tracking down this weirdo. As with the first game, all the puzzles are point and click and rely on your interaction with the surroundings and objects made available to you. There are times in the game when you can swap characters and play as Lambert, Hector’s highly irritating assistant, which was not an element of the first episode and adds a bit more complexity to the puzzles. 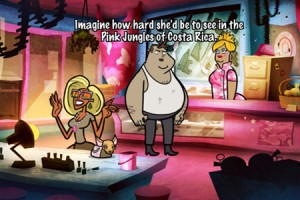 The characters are equally, if not more, hilarious and include a jovial butcher who sells blood-smoothies to goths and has done 12 years for murder. He has a beard and laughs a lot though, so pretty much my dream man.  You will also meet Doreen, an eye-wateringly flirtatious lady who owns a shop selling beauty products and weapons, and “Solid Base,” the resident IT expert at the police headquarters who nails that smug and patronising “have you tried switching it off and on again” tone so loved by the IT technicians at my work. There are a lot more characters than there were in the first episode and they are much better quality. It feels like more time has been put in to fully developing each one and making sure that the part they play in the storyline is relevant and not just an insignificant link to the next puzzle, which sometimes happened in the first one.

When it comes to getting around Clappers Wreake, Hector now has a fancy GPS instead of the map he used previously. This in itself doesn’t necessarily improve the game; however, there are many more locations and, although you have to unlock each area before you can visit it, travelling through the game feels a little more flexible and varied. The locations are as endearing as the characters, too, with a church/strip club (complete with pole dancing nun and confession box) and Chez La Boeuffet  (a restaurant serving “beef-on-demand”) being just two of the wonderful places you will visit. 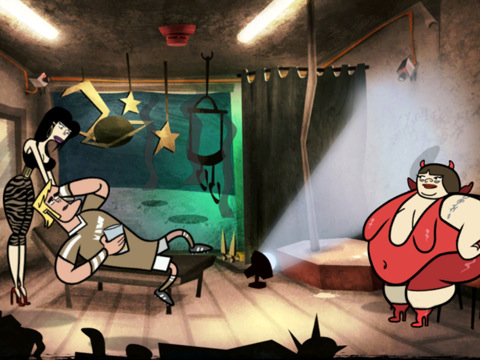 Hector: Episode 2 is definitely better than the first one, and I loved the first one. The puzzles and characters are more complex, entertaining and relevant to the storyline and, as well as the game being a lot longer than the first one, it also feels beefier. There were occasions when I felt the dialogue was a bit repetitive in places and I don’t love that you have to go back to Lambert every time you want a hint, but other than that I found it most humourous and entertaining. It may be true that video games aren’t inherently funny, but if this is as close as we are going to get to an actual “Laugh Out Loud,” then I am more than satsified. This is a point and click game, after all, so technically it shouldn’t even be fun, never mind funny.