Zombie Minesweeper: A Love Story is a game about a minefield, a girl, and the zombie she loves.

No, wait, that’s the game I pictured in my head when I first read the title. This game is about a girl who is trying to survive the zombie apocalypse, by escaping from a town filled with minefields. There’s no love story in the game at all. As a soap opera fan, I am greatly disappointed by this. 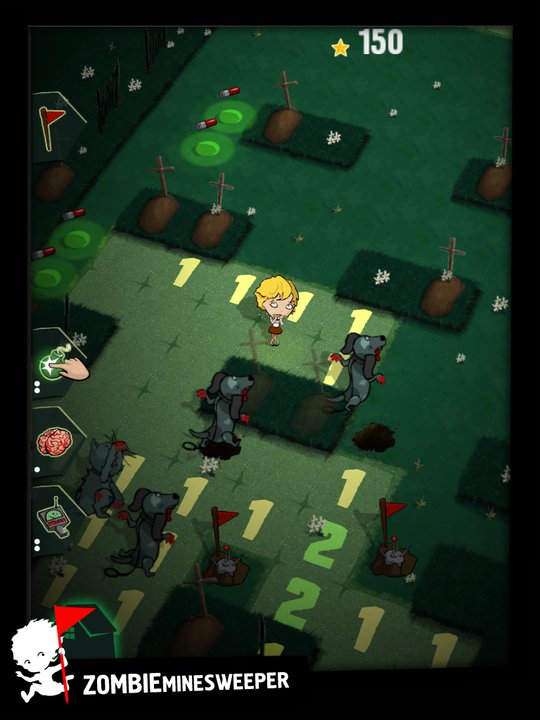 Here’s how the gameplay works. You control Sally, who looks absolutely terrified. You want to lead her all the way to the exit of the level, while avoiding the mines and the animal zombies. You can use the Minesweeper-style numbers on the ground to figure out where the mines are, so you can mark them with flags. The whole flag mechanic doesn’t really work, for two reasons.

I mean, I guess you could treat Zombie Minesweeper like a puzzle game, but that doesn’t work very well. Instead, you’re just going to run around randomly, trying to avoid the zombie enemies and hoping not to step on a square with a mine. Avoiding the mines is the easy part; avoiding the enemies who constantly chase you (and respawn) is the difficult part. The zombies killed me way more often than the mines did.

Yeah, forget Minesweeper. The being-chased-by-zombies aspect is the best part of the game. You get a variety of zombie-fighting weapons, the best of which is the shotgun, which can kill multiple zombies instantly. You won’t want to kill every zombie, though, because some of the animal zombies are downright adorable. The rabbit zombies yell, “Brains!” in high-pitched bunny voices, and the chicken zombies cluck, “Bawk-bawk-bawk-braaaaains!” It makes you smile a little bit, before the zombies kill you over and over again.

Fortunately, this game doesn’t have a life meter; being killed just sends you back to the start of the level. This means Sally can die a hundred times in a row on the same level, with no penalties. Could it be that she is secretly a zombie herself? More investigation is required. 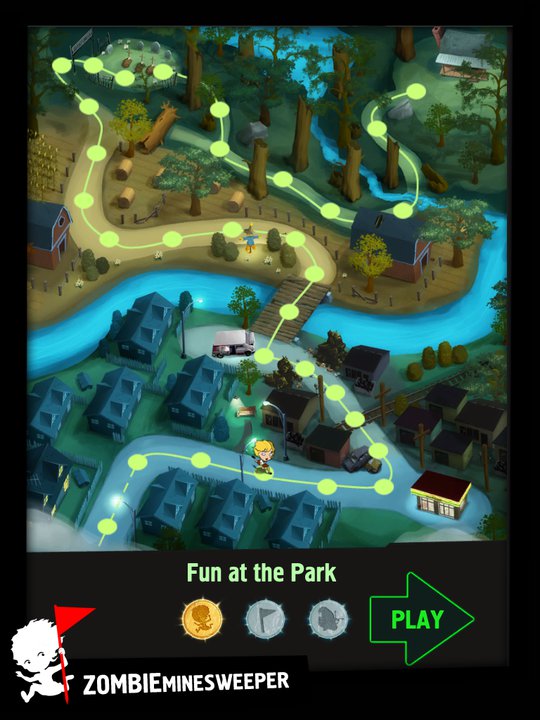 The game has high replayability, because the locations of the mines are randomized. You could play the same level five times and get a different mine map each time. However, I’d say that replayability isn’t very necessary here, because all thirty levels are basically the same. Sure, the background changes every five levels or so, but it still feels like you’re just going through the same level over and over and over.

There is some brief, unvoiced dialogue in this game. Basically, whenever you beat a level, Sally says a humorous quip like, “I’m against animal violence, but it’s okay if the animals are zombies.” Some reviewers have said that this dialogue is incredibly hilarious, but I only found it somewhat amusing. The picture of Sally saying these jokes is both amusing and disturbing at the same time, because she has a huge cartoon grin on her face, and because she’s covered with zombie blood.

All in all, Zombie Minesweeper: A Love Story is a decent casual game. It’s a good way to waste a couple of minutes, getting chased by zombies and being blown up by landmines. The game’s title still makes me kind of wish that this game had a love story, though.

What happens to Maya Fey (and all the other characters) in the new Phoenix Wright game? Find out here!